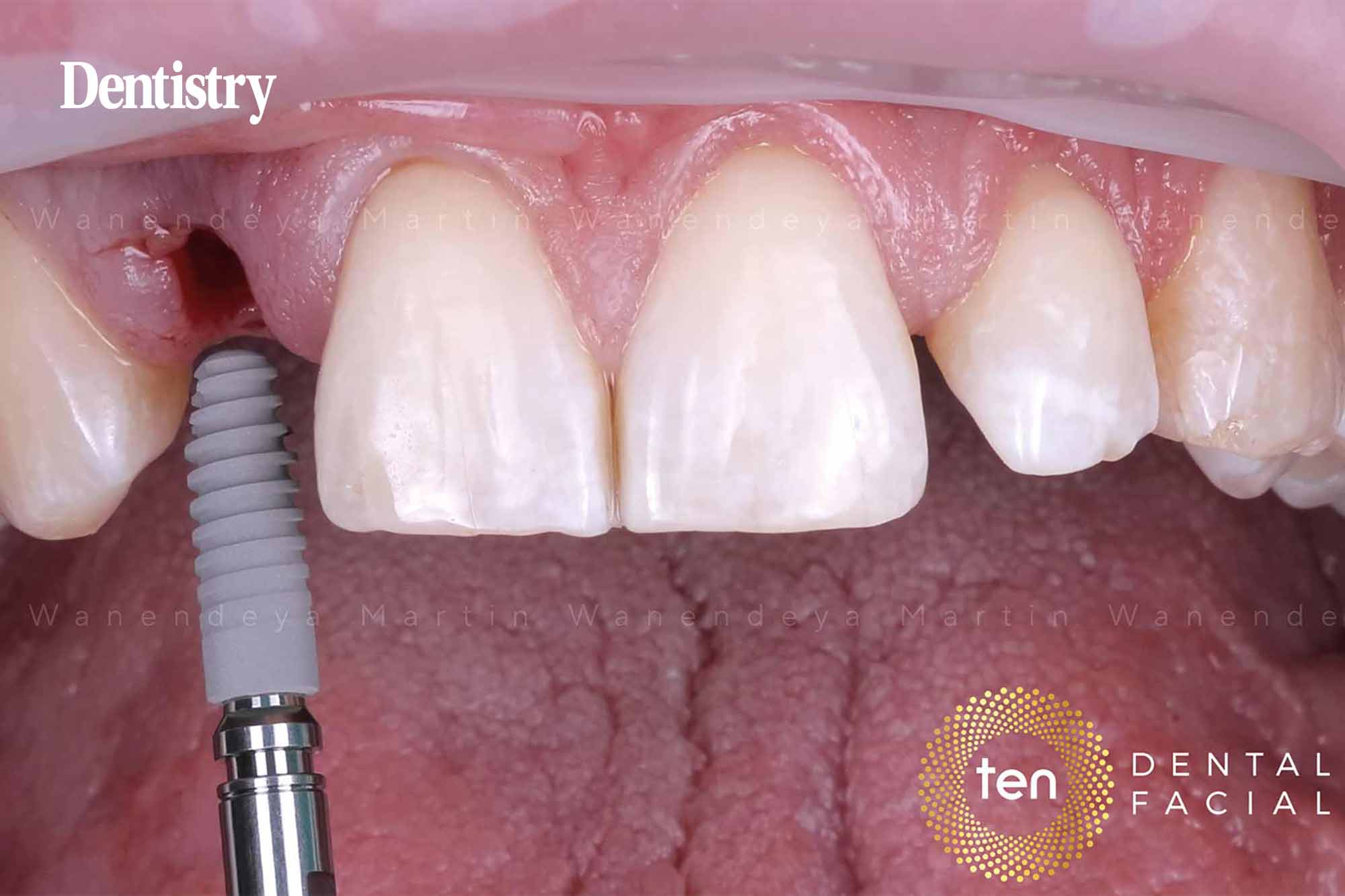 A 37-year-old male patient was initially referred to an endodontist at our practice, Ten Dental+Facial. This was for retreatment of failed root canal therapy on the UR2. However, this tooth was deemed unrestorable due to a lack of tooth tissue. Therefore the patient was referred to me for a dental implant consultation.

The patient’s medical history was unremarkable. He had a high smile line, a thick gingival biotype, and his oral hygiene was fair.

Although there were no mobile teeth and there was canine guidance on the right-hand side of the patient’s mouth, the UR1 was protruding. Lateral excursion was also affecting the UL2 and UL3.

The patient’s existing restorations would eventually require treatment, but there was no evidence of parafunction, supernumerary teeth, wear or bruxism.

The initial assessment of the patient involved a comprehensive dental and periodontal examination.

Periapical radiographs were taken to confirm the presence of root fractures in the UR2 at gum level. These radiographs also demonstrated that there was adequate bone on the apex and no signs of pathology.

Treatment options were then discussed with the patient.

Retreatment of the failing UR2 was suggested with further root canal therapy, but this procedure already had a poor long-term prognosis due to a lack of tooth tissue.

Other treatment options that were suggested involved extracting the UR2 and replacing it with a denture, a removable bridge, a fixed bridge, a Maryland bridge, or a dental implant.

The patient preferred the option of extracting the UR2 and replacing it with an implant for several reasons.

There were spaces between the patient’s UR2 and the adjacent teeth, so using a Maryland bridge would have meant that the appearance of the UR2 could not be replicated in the same way as the UL2.

Furthermore, the patient preferred a minimally invasive approach that would not affect the teeth adjacent to the UR2, as these teeth were healthy. The patient also wanted to avoid wearing a denture if at all possible.

Having discussed all the treatment options with him, the patient chose a dental implant to replace the failing UR2. The diagnostic stage of treatment followed, which involved taking a CT scan, an intraoral scan, and a digital impression, to create a digital wax-up.

The diagnostic images demonstrated that there was adequate bone for the placement of an Ankylos C/X implant (A11 3.5mm x 11mm).

Due to the narrow mesiodistal tooth width and spacing around the UR2, fitting the ideal provisional and final restorations involved placing as narrow an abutment as possible. For this reason, the Acuris conometric abutment was chosen.

Once the treatment plan had been agreed, the patient proceeded with surgery.

The UR2 was extracted atraumatically and it was confirmed that the tooth root and the buccal plate were intact. There was no evidence of pathology once the UR2 had been extracted.

An indicator was used to plan the position of the implant, before it was inserted into the bone and torqued to approximately 30Ncm for adequate primary stability.

An Acuris 3.3mm abutment was then fitted to the implant, followed by a temporisation cap. A provisional crown was fabricated from the diagnostic wax-up and hollowed out in the middle.

The restoration was then trimmed to the right size and shape, before it was fixed onto the abutment of the UR2.

Following implant surgery, the patient was assessed to confirm that the UR2 was in occlusion and lateral excursion. He was advised to follow a soft diet for three months while integration took place.

Figure 16 shows the implant, the abutment, and the temporisation cap with the provisional restoration in place.

The patient returned to the practice after three months of healing. Figure 18 demonstrates that there was good soft tissue shape and form around the temporary crown.

Because we had used the Acuris abutment, no cement or screws were used to retain the crown. This was a friction fit, which enables you to retrieve the restoration and the abutment easily if necessary, but also ensures that these components remain attached to the implant without dislodging once they are fitted (Nardi et al, 2017).

When the patient returned to the practice, an impression of the abutment was taken and sent to the laboratory to fabricate the final restoration (Figure 19).

This was an all-ceramic zirconia crown that had been built-up with a layer of porcelain. The lab cap was used for a try-in of the final restoration and to adjust the occlusal contacts as required.

The final, premanufactured cap (Figure 21) was placed in the mouth and picked up inside the crown. This was cemented together extraorally using Relyx, before the margins were polished.

The restoration was then fitted to the implant abutment using the fixation tool (Figure 22) that is included in the Acuris kit and is designed for fitting conometric restorations.

Figure 23 shows the final restoration in place on the day it was fitted. A radiograph (Figure 26) was taken to confirm that the implant and the restoration were stable.

Essentially, the Acuris is an innovative, new abutment designed with three parts for friction retention, anti-rotation and indexation. The Acuris was particularly suitable for this case. It enabled a full-contour crown to be fitted in an area with a narrow mesiodistal width.

The patient was delighted with the outcome of treatment. He had requested a fixed solution that was as natural-looking as the UL2, which had been slightly rotated and had some spacing between it and the adjacent teeth.

It was a privilege to be able to restore the UR2 with the same shape as the contralateral tooth. The patient was also pleased that he did not have to go through any stage of treatment wearing a denture.

61d
|
Implant Dentistry
Dentistry Online uses cookies to give the best experience. If you continue to use our site, we will assume that you agree to the use of such cookies. Read More.
Accept