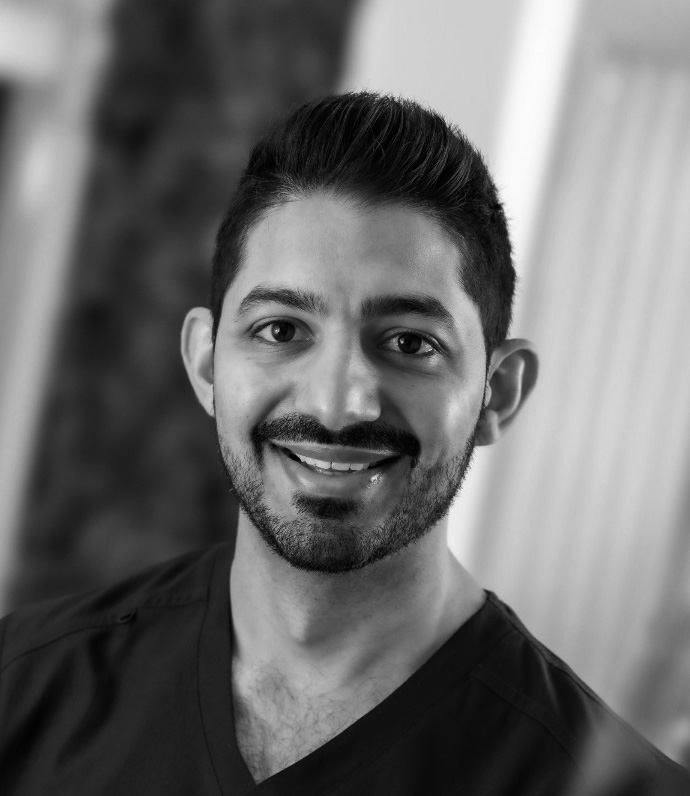 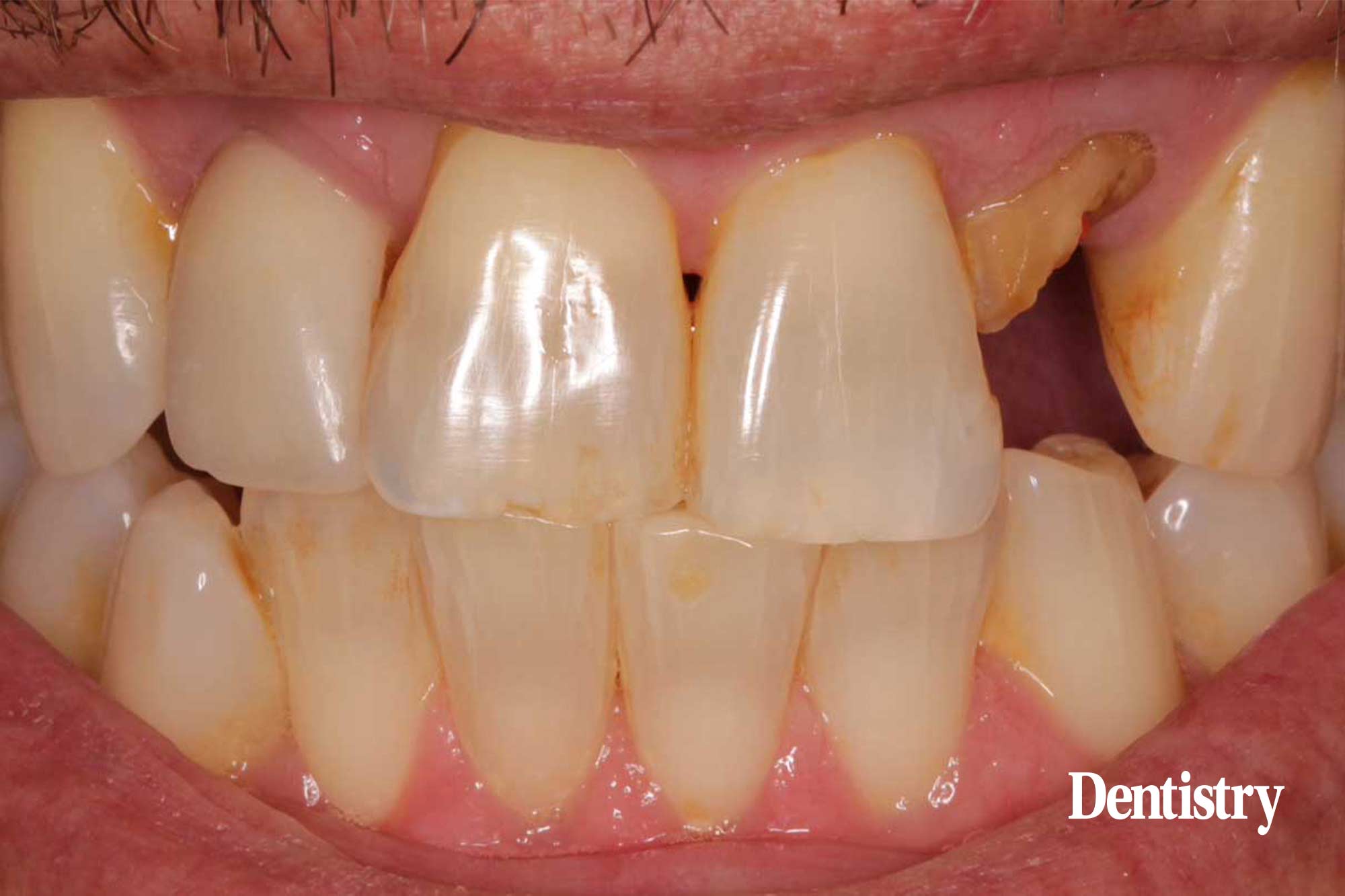 This patient was referred to the practice by his GDP with a decoronated left maxillary lateral incisor; his dentist advised that the remaining volume of tooth tissue was insufficient to restore. After being guided through his options, the patient decided that he wanted to further discuss the possibility of having an implant.

At his consultation appointment with me, the patient described a history of apical surgery on this tooth. Despite having a high lip line, he had low aesthetic expectation. This was underlined by his satisfaction with not having a temporary prosthesis when his tooth broke.

We discussed options and timelines for treatment and he was happy to go for many months without a prosthetic tooth. He was a non-smoker with no relevant medical history.

A CBCT scan revealed a large radiolucency apical to the root, with an intact buccal wall (except for a small dehiscence that the apicectomy was performed through). Many anterior teeth have very little buccal bone or none at all. This contraindicates immediate implant placement (placing an implant as soon as the tooth is removed).

The radiographic examination also revealed the presence of sufficient height of alveolar bone apical to the radiolucency. Coupled with his thick gingival biotype, all of these were factors that made the placement of an immediate implant possible.

The benefit to the patient of an immediate implant is that there is only one surgical intervention. The tooth can be removed and the implant placed at the same visit. The healing is less predictable and so there can be a cosmetic compromise, as we had in this case.

The patient consented to this, knowing that we would have a better chance of attaining a symmetrical result if we staged the surgery. He preferred to accept the compromise for the shorter treatment time as he was not concerned about the pink aesthetics.

It is not just the size, shape, colour and texture of the crown that are important, but also the gingival level, shape, texture and colour. This can be affected by many factors and in order to get a ‘perfect’ cosmetic result, all of these aspects have to be considered.

We extracted the tooth under local anaesthetic using periotomes and luxators (insertion mesially and distally only, in order to avoid putting pressure on the thin and delicate buccal wall).

The tooth was removed as atraumatically as possible. The granulation tissue from previous apicectomy treatment was thoroughly curetted using a Lucas Curette and degranulation burs.

Old granulation tissue can cause implants and bone grafts to fail.

Once cleaned, the site was prepared for a 3.5mm diameter, 15mm length implant. The diameter of this particular implant is sufficiently strong to support an incisor crown, and it being narrower than a standard implant (traditionally 4mm diameter) allows more volume for hard and soft tissue to form within the natural envelope of the patient’s profile.

The relatively long implant length allowed the apical 3mm of the implant to engage the healthy bone that was apical to the radiolucency. This makes the implant stable, known as primary stability, and is a fundamental aspect of attaining osseointegration. If the implant moves during the integration period, it will fribro-integrate (fail!).

The Coaxis implant from Southern Implants has a 12-degree screw channel inside of it. It has been modelled on the natural shape of an incisor when viewed from the side. This means that we could place the implant in the same orientation as the root. This is favourable due to the shape of the maxilla and the availability of bone at this angle.

This implant design also means that the implant retained crown can be screw retained, without the need for using any special prosthetic components.

Screw retention is helpful as it allows for the crown to be retrievable in case of any issues. It also helps avoid cement extrusion into the peri-implant tissues, which can lead to inflammation and eventual loss of implants.

Angled screws and angled abutments exist, but using these does lead to a compromise in biomechanics.

The implant was planned and placed in a more palatal position than the natural tooth. This can be seen on the digital plan. This ensured the presence of sufficient buccal volume of hard and soft tissue to allow the functional and aesthetic success of the implant.

One of the most common positioning errors of implants that leads to the necessity for their removal is when they are placed too far buccally. It is an easy mistake to make as the implant naturally follows the path of least resistance where the root has been extracted. This is why immediate implant placements (and the related bone manipulation techniques) are advanced procedures.

The beauty of implant dentistry is that although few cases are simple, many cases can be made simpler and more predictable. This is done by altering timelines and breaking the process down into smaller steps.

Had the root been extracted and the implant placement delayed for up to six months, the alveolar ridge healing would make this procedure technically far less difficult. The trade-off would be the loss of tissue volume (especially height, which is most difficult to regain).

Many different graft materials are available but most would be successful in grafting around this implant when placed immediately. This is because the void between the implant and the buccal wall, known as the jump-gap (because this is the space that the osteoblasts need to jump across to get from the buccal wall to the implant), is a well-contained defect.

I used a synthetic bone graft, which is not derived from another person or animal. This was excellent for this case but would be less successful in cases where the defect is not self-contained.

We left the implant to integrate for four months before confirming integration. We worked with Garren Fletcher at Dental Excellence Shrewsbury to make the screw retained crown. A custom milled titanium abutment and layered zirconia crown was used. The best tip I was given is to have a good relationship with an excellent technician. It has been my most important lesson to date!

Once fitted, occlusion was carefully checked and adjusted. It is important that when the teeth initially meet, the implant crown is not in occlusion. Only when the teeth are pressed together, and therefore the periodontal ligaments are compressed, should the implant come into contact with opposing teeth.

Overloading a screw retained crown can cause prosthetic issues, such as screw loosening, at best and implant failure at worst.

Immediately following the fit of the crown, the patient was seen by the hygienist for tailored oral hygiene instruction. This was to ensure that the correct interdental cleaning aids and techniques were being used.

Videos of the patient were taken on the patient’s mobile phone of him correctly cleaning around the crown to act as a memory aid for him to take with him. Excellent plaque control is really important in maintaining the peri-implant tissue health.

The patient was delighted with the result. Although I am pleased, and his satisfaction is paramount, I would prefer to have a symmetrical gingival margin on the implant crown to the contralateral tooth. If he were concerned, we could consider further hard and/or soft tissue grafting around the implant. Or, alternatively crown lengthening procedures for the maxillary right lateral incisor. 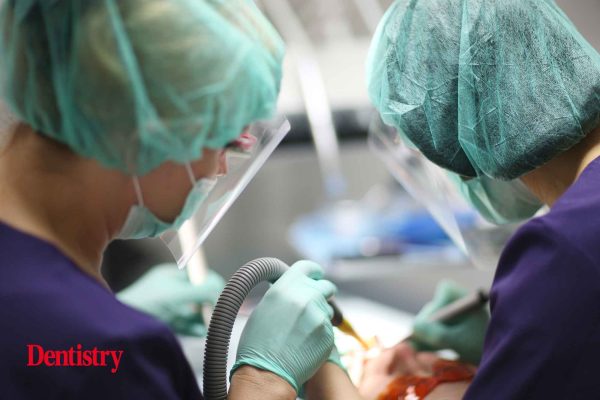 43d
|
Implant Dentistry
"Company" would like to send you relevant email communications to this webinar, by opting in to receive these emails you are agreeing to be sent email communications by "Company".
You can opt-out at any time.
Dentistry Online uses cookies to give the best experience. If you continue to use our site, we will assume that you agree to the use of such cookies. Read More.
Accept