Now and then – orthodontic advances 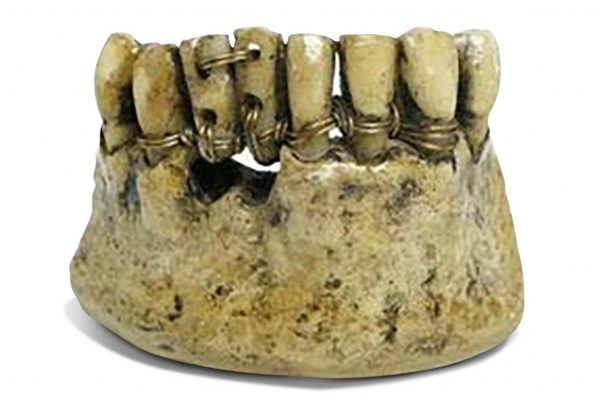 Now and then – orthodontic advances

In today’s digital world, it’s a wonder how we ever coped without our modern advancements.

In terms of dentistry, orthodontics might seem like the most modern branch. However, the mission to achieve the ‘perfect smile’ has been on the agenda for thousands of years.

Over the years, through varied devices and techniques, orthodontics gradually developed to become the sophisticated practice it is today. Poorly aligned teeth and jaws have always affected our ability to chew and speak. Therefore it is no surprise that the history of orthodontics goes back thousands of years.

Let’s explore where this all began.

Back to the future

Archaeologists have found crooked teeth in human remains, which date back 50,000 years. Today, we use braces to correct misaligned teeth, and something similar has been found in Egyptian mummies. Many of the mummies had crude metal bands around their teeth (Figure 1). Archaeologists believe catguts may have been tied to these bands to provide pressure to move the teeth.

The ancient Greeks, Etruscans and Romans also practised orthodontics. Here’s what we know:

Fast forward to the 17th century and we find evidence of dental impressions being used. Matthaeus Gottfried Purmann reported using wax to take impressions. Then, in 1745, the use of plaster of Paris was discovered.

However, progression in orthodontics stalled until the 18th century, at which point we saw a surge in development.

In the 1700s, French physician Pierre Fauchard – considered to be the ‘father of modern dentistry’ – invented an appliance called bandeau. This is thought to be the first modern dental brace that could be used for straightening teeth.

The bandeau was a horseshoe-shaped strip of metal that contained spaced holes that fit around the teeth to correct their alignment. It is reported that Fauchard would also operate on patients with a set of forceps called a Pelican. This would forcibly realign teeth and tie them to the neighbouring teeth to hold them in place while they healed.

In 1819, Christophe-François Delabarre developed things further by fashioning a wire ‘crib’. This was placed directly over each set of two teeth in the hope of keeping them in place. He separated overcrowded teeth by inserting wooden wedges between each space.

Three years later, in 1822, occipital anchorage was invented. This form of headgear fastens to the jaw from the outside of the mouth to exert gentle pressure on the teeth. (I remember learning how to fit and use this appliance at university – and this was only back in 2012.)

In 1839, Chapin A Harris published The Dental Art: A Practical Treatise on Dental Surgery. This outlined practices such as soldering knobs on bands to assist with tooth rotation. Also, applying gold caps to molars to open the dental bite.

Of course, no history of orthodontics is complete without mentioning Edward Hartley Angle. He was considered to be the ‘father of modern orthodontics’. Beginning in 1880, and with a long list of achievements behind him, he identified the true properties of a malocclusion, or misalignment. He addressed them with an increasingly effective set of orthodontic appliances.

Prior to the 1970s, orthodontists anchored brackets to teeth by winding wires around each tooth. However, the invention of dental adhesives meant that brackets could instead be stuck to tooth surfaces.

Stainless steel replaced gold and silver as the most popular choice for wires. This was due to its manipulability, and significantly reduced brace costs.

Lingual braces were also first introduced in the 1970s.

Today, there are many orthodontic appliances available to correct misaligned teeth and jaws, and retain them in their newly aligned positions on completion of treatment.

On our condensed orthodontic journey through time, we have now entered modern day, and the world of digital technology. Gone are the days of mucky impressions and fiddly brace systems with failing mechanics, long treatment and tiresome chairside time affecting the volume of patients seen in a day.

Since I qualified as an orthodontic therapist, I have been lucky enough to work with some wonderful inventions. These allow us to work as efficiently as possible with a streamlined treatment from start to finish. Here is just a selection of what’s on offer today.

Launched in 2007, Itero intraoral scanners are designed to deliver speed, reliability, intuitive operations. As well as outstanding visualisation capabilities for both orthodontics and general dentistry (Figure 2).

There is no doubt as to the global popularity of Itero. The figures, according to the Itero website, claim that Itero scans have been used in more than 6.0 million restorative crowns, bridges, and custom implant abutment cases and more than 27.4 million Itero orthodontic scans, meaning that a total of 33.4 million scans have been performed worldwide.

When using this scanner in the practice, three-dimensional dental images of patients’ mouths can be produced in less than two minutes. The scans taken are more detailed than the traditional two-dimensional images they can replace (ie, photographs).

Intraoral scanners feature a wand that is moved around the patient’s mouth, capturing every aspect of their tooth in thousands of frames per second.

These high-definition scans help dentists create accurate physical models for restorative work. This including (but not limited to) crowns, veneers, and implants.

Working in an orthodontic practice and using this machine throughout the working day allows for numerous benefits, including:

I believe Invisalign is by far the most advanced and well-established aligner system on the market today.

Invisalign is an extremely modern solution to straightening teeth without wires, and arguably the most popular teeth straightening aid used today.

Clear, smooth and durable plastic is custom moulded into a set of nearly invisible aligners that snap into place over the teeth.

Then, dependent on the severity of each case, the patients are instructed to change the aligners themselves from as little as every one to two weeks (at the orthodontist’s discretion) – slowly nudging the teeth into their correct positions.

Unlike many intraoral scanners, Itero has an open file source (STL) for scan types, and is compatible with the Invisalign system, including its Invisalign Outcome Simulator (Figure 3). This technology improves the patient experience by allowing them to see what their teeth could look like on completion of their orthodontic journey.

As a result, orthodontists and patients receive the completed Invisalign aligners quicker than ever before.

Dental Monitoring is the latest in modern and innovative technology, emphasising exactly how far we have come with dental treatment.

They enable orthodontists to track patients’ treatment progress live and remotely from a dedicated and secure online dashboard. On the other hand, patients use an app that sits on smartphones ready to be used at a time and place convenient to them.

At the start of the treatment, the patient is shown how to use the app and to take a scan of their teeth by a member of the clinical team. Then the patient takes weekly scans within the comfort of their own home or wherever it is convenient to them.

These scans are automatically analysed and uploaded to their orthodontist dashboard and, depending on what is observed, instruction is provided to both the clinical team and the patients as to when to progress to the next set of aligners.

This tracking system means that treatment is shaped by patients’ own biology and compliance rather than a standard timeframe, therefore having maximised potential to speed up treatment.

With all of our patients having such busy schedules, this means fewer visits to the dental practice. It’s one less thing to squeeze into their day.

Where orthodontic intervals were once in excess of eight weeks, we now are continuously monitoring our patients’ teeth in real time and we can act urgently without any time being lost.

The latest advancement to Dental Monitoring is the Scanbox (Figures 4a-4c).

The Scanbox allows patients to provide the best photos of their teeth, which lets us accurately assess their treatment progressions.

By inserting their mobile device in to the Scanbox, the images are captured from the correct distance and angle, which heightens their orthodontic experience and exceeds their expectations throughout, with increasing efficiency.

Suresmile is a technology that enables us to take digital scans of patient’s teeth in order to design and produce custom wires for that specific patient (Figure 5a).

Orthodontists utilising Suresmile technology can ensure the braces move teeth in a precise direction, which can reduce the amount of time spent in braces by as much as a third.

The wiring is sculpted by robots rather than the traditional method by hand (Figures 5b and 5c). This limits the margin of error within the wire, so that it more precisely matches the patient’s teeth and the orthodontist’s prescription.

Can you remember the hours invested in those first, second and third order bends back in your university days? Imagine never having to do this again and risk a bracket debonding from the step being too large and the force levels applied too great.

The high grade metal alloy wires are lightweight. The wire’s reshaping is triggered by the patient’s body heat. It remembers the original shape the metal was in and uses heat to move back into that original form.

Treatment time is drastically reduced with efficiency being adopted to its fullest.

The Insignia system is an advanced digital orthodontic solution, which combines the efficiency of digital smile design and the precision of patient-specific appliances (Figures 6a and 6b).

Using 3D modelling (from the Itero scanner), Insignia offers customised braces and archwires. Every bracket is custom milled with individual prescriptions to fit our patient’s teeth, allowing for more accurate and faster results.

This indirect bonding technique is a particular favourite at many orthodontic practices, with dual arch bonding time being reduced to less than 30 minutes.

Complementary to Insignia, the Damon System is the perfect mechanical partner due to its design. It already applied lighter forces than traditional braces.

Being an orthodontic therapist working alongside a specialist orthodontist, this was a way of them keeping control of the end result. Giving confidence that their treatment plan was being followed with higher accuracy and promised results.

DCPs are highly skilled at managing patients’ expectations and delivering perfectionistic results on a daily basis.

With the help of these digital and seemingly futuristic technology advances in dentistry, any practice would be a force to be reckoned with.

The digital technology discussed in this article are the modern day epitome of efficiency in orthodontics. Yet, there is always room for further growth and development. I am excited to see where we will end up.

Did you enjoy this article? You can read more by subscribing to Clinical Dentistry magazine.