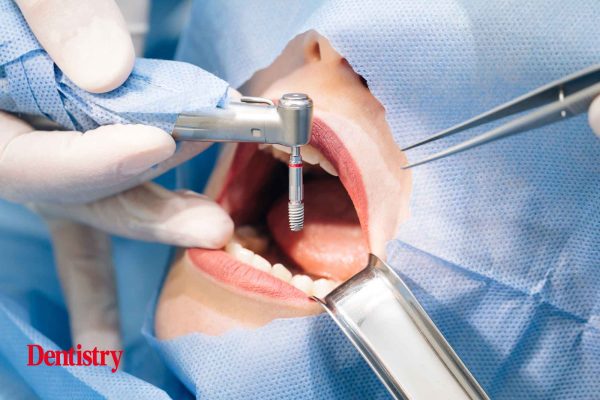 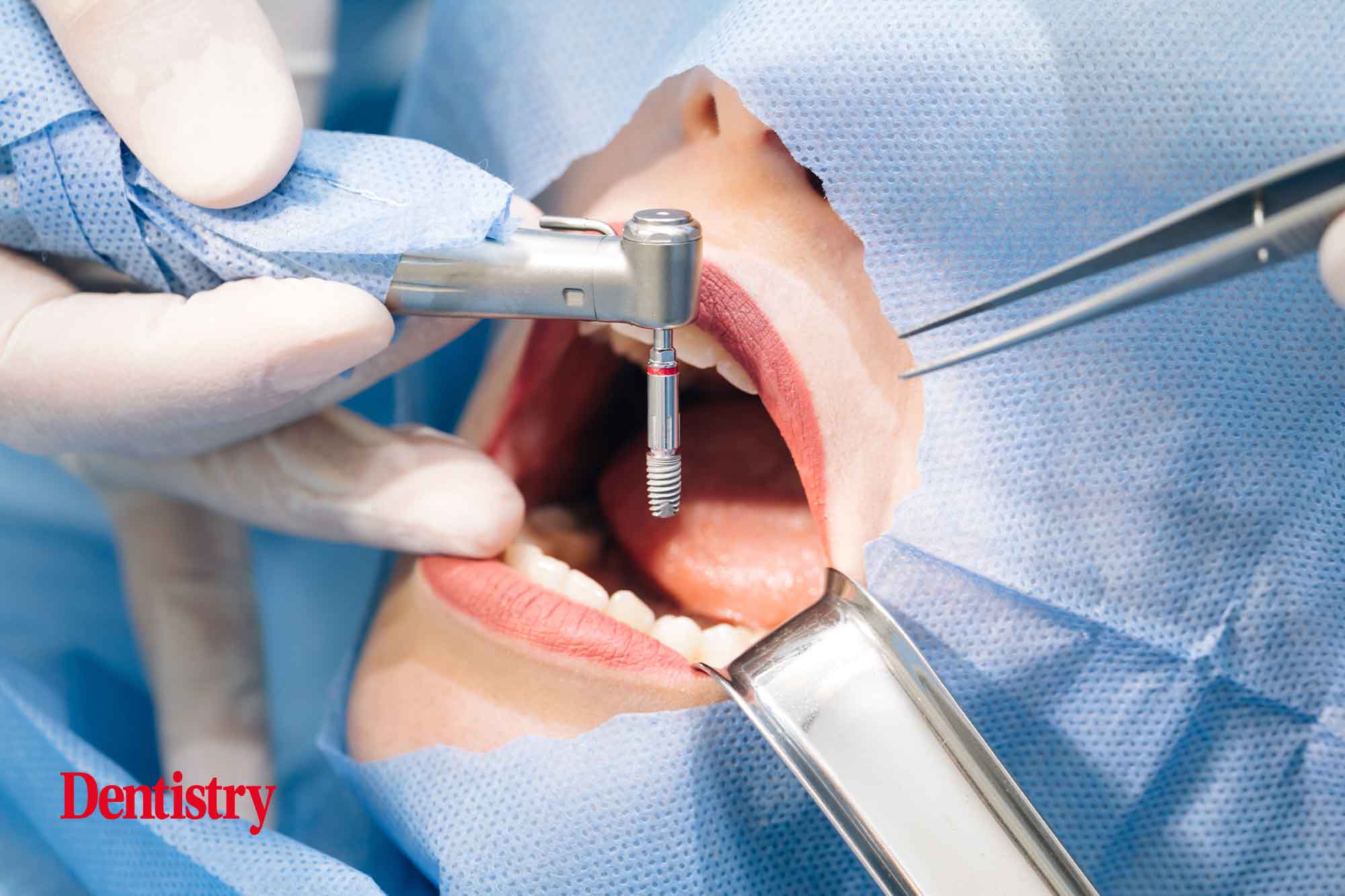 The placement of dental implants can be a successful long-term treatment. Especially for patients suffering with diseased or missing teeth (Albrektsson and Zarb 1998; Buser et al 2017).

There have been clinical trials and literature reviews focusing upon survival and success of implant treatment and factors for treatment. The follow-up period in the literature is usually not more than five years (Altman and Cates 2001).

Implant failure generally refers to a lack of osseointegration with the bone shortly after placement due to biological problems. Or, much later due to prosthetic complications, which constitute 70% of the causes (Albrektsson et al, 1986; Moraschini et al 2015).

Precise failure causes are usually unclear in the literature. Even if the listed factors for success are present (Esposito et al 1998; Jang et al 2011).

Some authors correlate implant failure with a previous history of periodontal diseases. They claim that adjacent diseased teeth act as a reservoir for periodontal pathogens that are transmitted to the adjacent implants. This increases the risk of mucositis, periodontitis and bone infection of the present implant (Schou et al 2006).

Implant survival refers to an implant that is functional. However, it may not have the ideal conditions that apply to be considered successful. Thus all successful implants have survived, but the reverse is not true (Müller and Schimmel 2016).

A survival rate of 96.5 % for single tooth replacements, 95.4% for fixed bridge-supported implants and 90.1% for reconstructed ridges after 5- years of follow-up have been reported in systematic reviews. Although, there are few papers discussing results of implant treatment after longer periods of follow-up (Lang et al 2004; Apse et al 1991).

The aim of this retrospective study was to assess and evaluate the clinical and radiographic performance of Maxi-Z implants after 10-12 years of placement and loading.

The study presented in this article aimed to evaluate osseintegrated Osteocare Maxi-Z implants 10-12 years following placement using clinical and radiographic measures. As well as to assess complications and patient satisfaction as outcome variables.

From June 2007 to June 2009, a total of 67 Osteocare Maxi-Z implants were placed in 36 patients. Patients were recalled 10-12 years after placement for clinical and radiographic evaluation, or were evaluated upon the patients’ request for further (related or unrelated) treatment

A total of 67 Osteocare Maxi-Z Two-Piece and Flat-End implants were evaluated after 10-12 years of placement. Crestal bone resorption around the implants ranged from 0.5mm to 1.8mm. No implants had failed. Abutments showed loosening in relation to three implants. This was corrected by provision of new abutment screws tightened to a torque of 30Ncm.

The study concluded that Maxi Z implants are suitable for the treatment of edentulous patients. Or, patients with diseased teeth in either mandible or maxilla with a minimum of complications and postoperative care.

This study was carried out on 36 patients (21 females and 15 males) with a total of 67 successfully osseointegrated implants which were placed in different sites of the upper and lower jaws. Patient ages ranged from 25 to 70 years at date of placement. All patients provided written consent for the scientific use of their data.

The patients presented with various contraindications: 37.8% of the patients had a history of periodontal disease; 13.9% were diabetic; and 16.7% of patients were smokers.

Maxi Z two-piece and Maxi Z flat-end implants (Osteocare Implant System Ltd, United Kingdom) were used in this study. The implants are made of titanium alloy (6Al-4V ELI). The external surface of the implant body comprises a reverse-buttress thread and is grit-blasted and acid etched.

The implants are available in variable lengths: the Maxi Z Flat-End, (used mainly in the upper and lower posterior regions) at 8mm, 10mm, 12mm, and 14mm while the Maxi Z Two-Piece implants used were 11mm, 13mm, and 15mm. The implant diameters used were 3.75mm and 4.5mm, 5.5mm.

A preoperative evaluation was performed, including visual examination and palpation of the entire oral and paraoral tissues. Study casts were prepared to evaluate the intermaxillary arch space and type of occlusion.

The buccopalatal/lingual alveolar ridge width at the implant site was measured using a bone caliper. Periapical and panoramic radiographs for the recipient sites were taken.

Local anaesthesia was induced using articaine with adrenaline 1:100,000. The surgical procedures were flapless in cases where the ridge width was more than 5.5mm and free of any bony defects or concavities. In other cases, a full thickness flap elevation was performed, with para-crestal (palatal or lingual) incisions extended from the mesial tooth to the distal tooth of the implant site, with two vertical releasing incisions.

The recommended rotation speed of the handpiece was 2,000rpm and cooling was provided by copious irrigation with normal saline.

Primary stability was established and checked with a torque wrench to be more than 30Ncm. After implant placement, surgical flaps (where relevant) were sutured, achieving a complete tension-free soft tissue primary closure.

Sutures (where relevant) were removed after 10 days.

Each patient was evaluated five months prior to delivery of the final prosthesis and re-evaluated 10-12 years postoperatively during regular check-ups. Patients were examined for peri-implant probing depth, gingival indices, bleeding on probing, implant mobility and complications.

Peri-implant probing depth (PD) was measured on axial surfaces of all implants to measure pocket depth (the distance from the peri-implant mucosal margin to the base of the clinical probing depth). The measurements were carried out using plastic periodontal probes and taken mesially, buccally, distally and lingually around the implant and the average depth was recorded.

The simplified gingival index system (GI) proposed by Apse and associates (Apse et al 1991) was used, as per the following:

Full mouth bleeding on probing (BOP) was evaluated at four surfaces for each tooth or implant and expressed as percentage of positive sites over total sites (full-mouth score) as the following (Mombelli et al 1987):

Periapical, panoramic or cone beam radiographs were taken for all patients immediately postoperatively, then around six months after implant placement (at the delivery of the final prosthesis); and between 10 and 12 years postoperatively.

Each radiographic image was calibrated using the known distance between the screw threads or the length of the implant. The implant platform was used as the reference for each measurement. Radiographs taken at prosthesis delivery served as the baseline for evaluating marginal bone level change over the study period.

The linear axial distance between implant platform and the most coronal bone-to- implant contact was measured. To have a single value for each implant, mesial and distal values were averaged.

The patients were also asked about the presence of discomfort, pain and tenderness.

The 67 implants were followed-up for between 10 and 12 years.

The mean peri-implant PD was 0.73mm at the time of crown delivery, 0.94mm after 10 years of function and 0.96mm after 12 years’ follow-up. The differences were statistically insignificant.

The mean GI score was 0.60 at the time of crown delivery, 0.68 after 10 years of function and 0.83 after 12 years of following up, which showed clinically non-significant differences.

The mean full mouth BOP was 9.8% at the time of delivery, 11.6 % after 10 years and 8.4% after 12 years’ of follow-up. The differences were statistically insignificant.

This was established using the Periotest M. The mean Periotest value (PTV) was -2 at the stage of abutment placement, -3 after 10 years and -4 after 12 years of follow up. Since a PTV of -8 to 0 is considered the ideal value to denote successful osseointegration, the differences are not clinically significant.

Three implants showed abutment loosening, which was corrected by placing new abutment fastening screws tightened to a torque of 30N/cm. The risk of mucositis was 19% and peri-implantitis was 8% at 12 years’ follow-up.

In response to the questionnaire, 83% of the patients described the option of implant placement to treat edentulous or diseased teeth as excellent; 12% as very good; and 5% as good.

The data were tested for normality using the Anderson-Darling test and for homogeneity variances prior to further statistical analysis.

Accurate assessment of marginal bone level around implants is important. It determines longevity of the implant (Carrasco et al 2019).

Studies have shown that subjects with generalised aggressive periodontitis suffer a higher rate of bone resorption. They have increased risk of developing mucositis and peri-implantitis compared to periodontally healthy individuals (Swierkot et al 2012).

Host-specific factors including age, systemic conditions and smoking may also contribute to implant hazards (Tonetti et al 2017). It is speculated that over 65, increasing age is associated with an inferior improvement in functional parameters of the implant (Enkling et al 2019).

A recent study has reported insignificant correlations between smoking, diabetes and incidence of peri-implantitis (Degidi 2016). Other studies, however, confirm the prevalence of significant complications and implant failure associated with these risk factors (Cavalli et al 2015). The difference in conclusion may result either from dose-dependent effects of smoking or negative impact of diabetes on vascularisation and healing, but this is not shown clearly (Bandeira et al 2107).

The rates of peri-implant bone loss recorded in the present study are consistent with other studies which demonstrate no correlation between rate of bone loss around an implant and its location in the jaw (Lekholm et al 1999).

The literature reports an association between poor bone quality and increased risk of implant loss (Rams et al 1984), which is confirmed in the present study. One case of osteoporosis showed a higher rate of bone resorption compared to normal bone type. It is important to clarify that a predictable prognosis must be based on careful evaluation of the age of the patient, and that bone quality/volume can be improved prior to implant placement.

It is well known that peri-implantitis results from specific tissue inflammatory reaction together with pathogenic bacteria (Swierkot et al 2012), which highlights the role of the dentist in maintaining integrity of hard and soft tissue by preventing any possible infection. This can be achieved via patient education, providing motivation for optimum oral hygiene, together with regular recalls for patient follow-up (Rams et al 1984).

The accuracy of results of the present study is based on several factors including long term follow-up, precise preoperative evaluation and documentation of periodontal condition, and standardisation of the implant system used. In addition, the diversity of background of patients treated adds strength to the results as it reflects the real-life clinical situation faced by dental professionals.

To conclude, Maxi Z implant is a successful treatment option to replace any diseased hopeless tooth. Or, to restore edentulous or partially edentulous jaws with a minimum number of post-operative complications.

Practical experience and recent advances in oral implantology highlight the need for more collective, multi-centred studies with long term follow-up to focus on likely complications and to avoid or reduce them in the future by identifying their causes.

The authors would like to thank Mr Julian Gauld, director and Mrs Carly Harwood, business development manager of Osteocare Implant Systems for their contribution and help throughout this study.

This article was commissioned for Implant Dentistry Today. To read the latest issue visit idtmagazine.dentistry.co.uk.

Wael Att is professor and chair of the Department of Prosthodontics at Tufts University School of Dental Medicine, Boston. He… 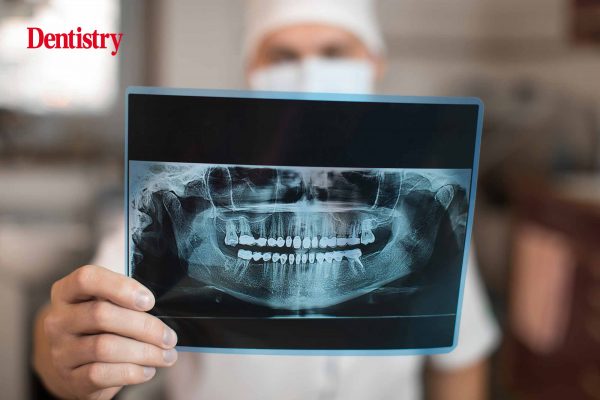 Implant insights – so you want to be an implant dentist?