Case of the month: a radiology report due to problems in patient anatomy 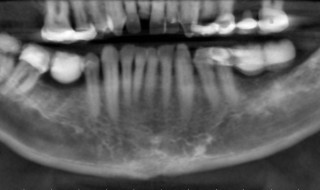 Case of the month: a radiology report due to problems in patient anatomy

Implant analysis requested. Relevant history – please see comments and special requests. Client notes – the primary areas of concern are those sites involved in future implant placement, the LR5 and LL5 and LL6. In the LL5 site I have noticed a well corticated area close to the buccal plate, roughly 5mm from the crest of the ridge. Similarly in the LR5 site there is a round radiopaque area 9mm from the crest of the ridge towards the lingual plate. My concern is that these are arteries that I would like to avoid.

Air space: there appears to be an ovoid area of increased soft tissue density superior and posterior to the uvula and the soft palate. In addition, the pharyngeal tonsils appear to be enlarged, especially the right side.

Other findings: curvilinear areas of increased density were noted within the lower neck in areas anatomically associated with the carotid arteries; these areas appear to be consistent with calcification the carotid artery.

Other findings: the small areas of increased density noted within the lower neck are anatomically associated with the carotid arteries and are consistent with calcification of the carotid arteries. Vascular calcifications have been associated with an increased risk of cardiovascular disease and stroke. Review of patient’s medical history for increased risk factors such as high blood pressure, elevated cholesterol, stress, and smoking is suggested. Physician referral is suggested with findings of elevated risk factors or if patient is not currently under the care of a physician.

Implant measurements: have been provided for requested sites; please review the comments associated with each of the cross-sections.

31d
|
Implant Dentistry
Dentistry Online uses cookies to give the best experience. If you continue to use our site, we will assume that you agree to the use of such cookies. Read More.
Accept