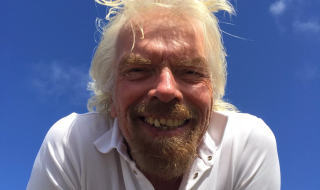 Richard Branson has coined a new term – ‘tennis teeth’ – after smashing his front teeth during a game of tennis.

The billionaire Virgin tycoon accidentally hit himself in the mouth with his tennis racquet while playing a game of tennis at his Moskito Island resort in the British Virgin Islands.

‘Set point. I went for a lob…and somehow ended up smashing my two front teeth with my racquet!’ said the entrepreneur.

‘I’ve heard of tennis elbow, but this was tennis teeth.’

Richard’s teeth were saved thanks to the services of local dentist, Dr Garfield Neita.

Richar said: ‘Thankfully, there was a wonderful local dentist (Dr Garfield Neita) who quickly had a smile back on my face.

‘Next day I was back on the court, getting my revenge by beating our resident tennis pro.

‘After the treatment I was given a dollar by the Tooth Fairy, which made it all worthwhile!

‘I’d like to say I’ll be more careful in future, but when I’m on the tennis courts – as with pretty much everywhere else – I love competing and having fun.

‘Hopefully the next time there’s a smash, it’s my forehand and not my forehead!’

SMASH! Set point. I went for a lob…and somehow ended up smashing my two front teeth with my racquet! I’ve heard of tennis elbow, but this was tennis teeth.

1584d
|
Celebrity News
Dentistry Online uses cookies to give the best experience. If you continue to use our site, we will assume that you agree to the use of such cookies. Read More.
Accept