Stacey Solomon has expressed regret over porcelain veneer treatment, saying ‘They’re too big for my mouth’.

At one point, viewers were concerned that her teeth were rattling, but it turned out to be the Loose Women presenter’s dangly earrings.

Stacey previously told viewers that she suffered from osteoporosis when she was pregnant with youngest son Leighton, five.

‘When I was pregnant with Leighton, I had real issues with my teeth so I ended up having hardly any left at the back, and I had to have teeth stuck on to whatever was left.’

She continued: ‘I actually got temporary osteoporosis; apparently it happens to loads of women.

‘I thought I’d have nice bright white teeth, but they’re the bane of my life, I hate them.

‘I think they’re so ugly and so fake – they’re massive.’ 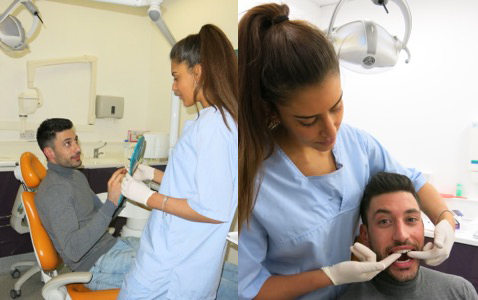 1882d
|
Celebrity News
"Company" would like to send you relevant email communications to this webinar, by opting in to receive these emails you are agreeing to be sent email communications by "Company".
You can opt-out at any time.
Dentistry Online uses cookies to give the best experience. If you continue to use our site, we will assume that you agree to the use of such cookies. Read More.
Accept