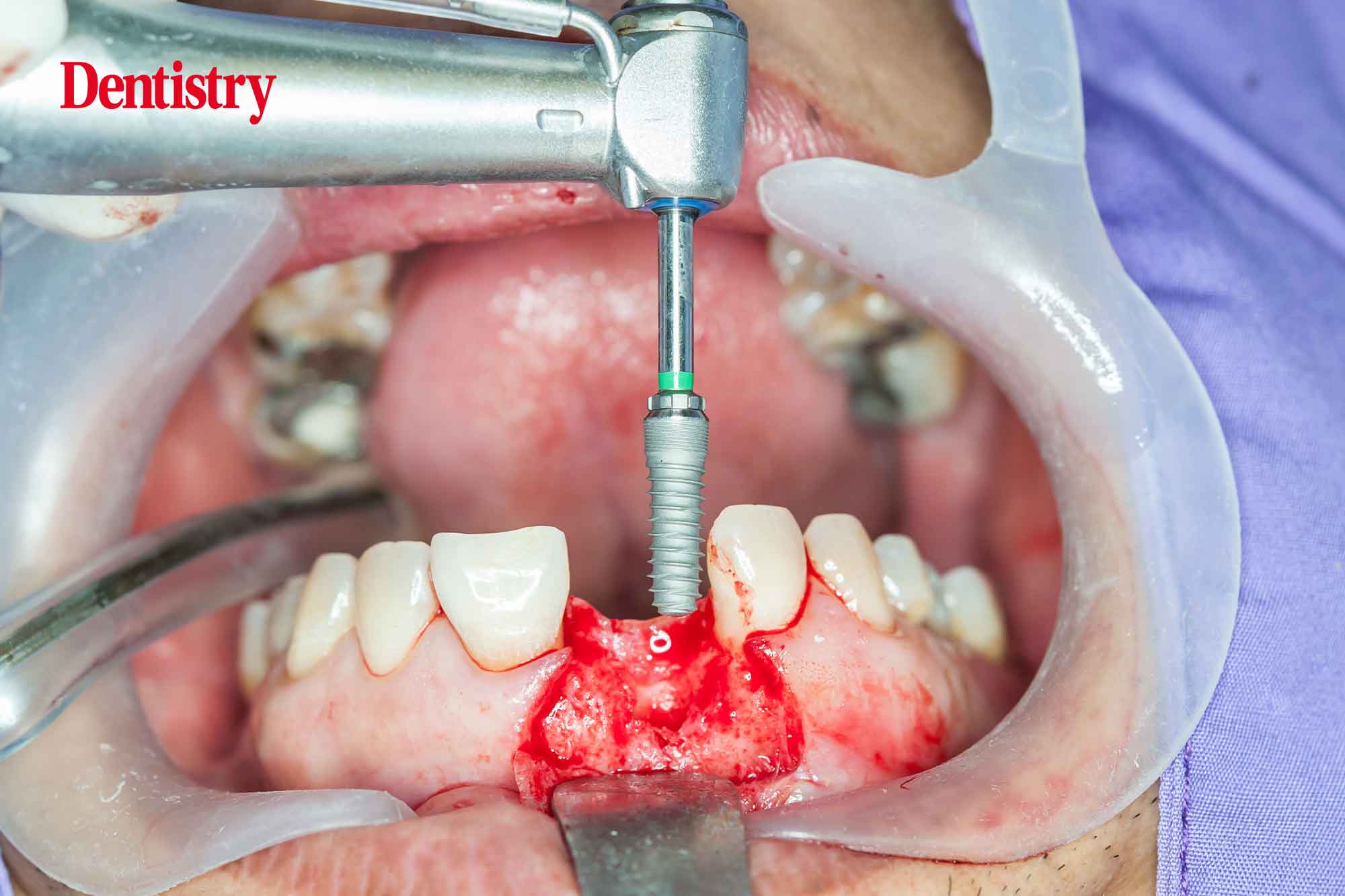 Vertical ridge augmentation in the posterior mandible is often considered by many to be one of the most difficult and challenging clinical situations to manage. This is due to the fact that many anatomical structures are in the vicinity.

They include the lingual artery and nerve, the salivary glands and ducts, the inferior dental canal and its neurovascular bundle. Also, the mental nerve emerging from the foramen.

Medial to the posterior mandibular ridge is an important bony landmark called the mylohyoid ridge. This is where the mylohyoid muscle is attached. It runs obliquely, being more superior at the molar region and slopes deeper anteriorly in the premolar area. It separates the floor of the mouth into a more superficial and a deeper compartment.

Many vital structures lie superficial to the mylohyoid muscle. This includes the lingual artery and nerve, Wharton’s duct, and the sublingual glands. Whereas part of the facial artery runs in the deeper part of the compartment before it crosses to the buccal side.

The arterial supply to the mandible is mainly via the lingual artery. Its branches are on the lingual side and the facial artery on the buccal side (Von Arx and Lozanoff, 2017).

Mandibular canal (MC) or inferior dental canal (IDC) is the most important anatomic limitation in the mandible. It runs along the lower border the posterior mandible.

When there is an atrophy of the alveolar ridge in the posterior mandible, the ID canal becomes closer to the ridge crest and that may further limit or even preclude implant placement. Ridge augmentation procedures are often indicated before implant placement.

Others suggest that implants can be placed closer than 2mm to the ID canal. This is provided that one can avoid thermal, pressure and traumatic damage to the ID nerve (Tufekciojlu et al, 2017).

The mental foramen is the end point of the mental canal emerging from the mandibular canal. It is another anatomical landmark with great surgical significance, and it is located prominently on the external surface of the mandible.

The location of the mental foramen poses a risk of damaging the mental nerve when surgical procedures involving the buccal vestibule are carried out, such as periosteal releasing incisions for flap advancement, for example.

The anatomical spatial relationship of different structures in the posterior mandible was well described by Ronda and Stacchi (2011).

They highlighted the thin layer of superficial muscle attachment from the main body of mylohyoid muscle to the lingual periosteum, and advocated the detachment of this muscle from the underlying flap for lingual flap advancement.

It is crucial to avoid any perforation in the manipulation of the soft tissue in vertical ridge augmentation. Especially of the lingual flap (Urban, 2017).

Autogenous bone grafts remain the gold standard when it comes to the reconstruction of bone defects in the jaw.

The retromolar area, including the buccal shelf lateral to the molars and the ramus, is a preferred intraoral donor site of harvesting autogenous block grafts.

The anatomical limits of the retromolar/ramus areas include the coronoid process, the molar teeth, the mandibular canal and the width of the posterior mandible. Monocortical veneer grafts of up to 25mm in length, up to 15mm in height, and up to 3mm in depth can be harvested. Although the mandibular canal is a prominent structure in the vicinity of retromolar and ramus donor sites, damage to the ID nerve is a very rare incident, and overall morbidity is much lower compared to the symphysis donor site.

A 64-year-old Caucasian lady with no relevant medical history was referred by her dentist for an implant assessment. She lost her premolar and molar teeth on the lower left side many years previously.

The patient had difficulty wearing a partial lower denture and would prefer to restore the lower left side free end saddle with fixed implant restorations.

Clinical examination showed that the LL4, LL5, LL6, LL7 and LL8 were missing. The lower left alveolar ridge was very atrophic with thin bony ridge and there was a minimal amount of keratinized mucosa overlying the ridge (Figure 1). The interocclusal distance was adequate for restorations.

What appeared to be the crest of the ridge was in fact, the vestige of the lingual bony plate.

Interestingly, there were a few dark-coloured amalgam tattoo markings in regular intervals along the alveolar ridge crest.

The patient had no recollection of the origins of those tattoo markings. They conveniently provided reference points for measurements of ridge dimension pre- and postoperatively.

A CBCT scan showed that there was insufficient bone volume above the ID canal for implant placement. The ridge crest was thin and positioned lingually in respect to the optimal position of the implants. The ridge crest had a width of around 2mm and the distance above the mandibular canal was between 7-8mm (Figures 2 & 3).

According to the Cologne Classification of Alveolar Ridge Defects (CCARD) the defect was C2e (involving three teeth).

After a careful discussion with the patient, a staged approach treatment plan was formulated.

The ridge augmentation procedure was performed under intravenous sedation. Premedication was prescribed an hour before the surgery.

Local anaesthetic was administrated with infiltration on the buccal and lingual side only. A mid-crestal incision with a mesial releasing incision was made at the LL3. A full thickness flap was raised to expose the underlying bony ridge.

The atrophic nature of the alveolar ridge with several dark markings near the crest of the ridge was evident (Figure 4). An autogenous bone block of adequate dimension was harvested from the retromolar area or buccal shelf further posteriorly (Figure 5) using a Piezotome (Acteon).

The advantages of using ultrasonic surgery are numerous and well documented. These include the atraumatic nature and precision in osteotomy surgery, soft tissue preservation and keeping the bone loss to minimum (Urban, 2007; Vercellotti, 2009; Maiorana et al, 2005).

The block was divided into two smaller blocks of roughly equal dimension. The bed of the recipient site was perforated with drills to enhance rapid revascularisation. Each block was trimmed and fixed to the mandibular ridge with two 1.25mm diameter osteosynthesis screws (Straumann) (Figures 8 & 9).

It is important to ensure a close adaptation between the autogenous bone blocks and the recipient sites. Although no preparation of the recipient bed was necessary.

The veneering blocks increased the bone volume both in vertical and horizontal dimension. The block was adjusted (any sharp edges were smoothed) and positioned with care avoiding any pressure on the mental nerve (Figure 10).

The lingual flap was carefully mobilized with blunt dissection as described by Ronda & Stacchi (2011).

The buccal flap was carefully mobilised with a single continuous incision through the periosteum and separation of the underlying connective tissue with a blunt instrument. The incision needed to be well away from the mental nerve and its foramen in order to avoid damage to the nerve. Tension-free flap advancement had to be ensured before flap closure. Finally, the augmented site was closed with d-PTFE (cytoplast) sutures (Figure 12).

Healing was uneventful and the bone graft was left undisturbed for four to five months (Figure 13).

A radiopaque guide of the final restorations was fabricated (Figure 14). A new CBCT scan was taken with the radiographic stent in the mouth.

The ridge had increased from 5mm (Figure 3) above the mandibular canal to more than 10mm (Figure 19). More significantly, the crest of the ridge had shifted from an initial lingual position to a more restorable buccal position, beneath the planned restorations (Figures 16-19).

The implant placement surgery was proceeded as conventional routine surgical procedure. Upon raising the flap, the bone blocks were well integrated (Figure 20), and there was minimal graft resorption. Although no Bio-Oss particles were found to be integrated on the surface of the bone blocks and between them.

No additional grafting was indicated, and all three implants were left in non-submerged fashion (Figure 22). Subsequent review appointments showed that the healing was uneventful, and the case was discharged back to patient’s own dentist for the fabrication final restorations.

The long-term consequences of loss of teeth may result in patients presenting with atrophic alveolar ridges.

These alveolar bone deficiencies (vertical, horizontal, or a combination of both) can make it difficult to place implants in restoratively driven positions. The proximity of anatomical structures poses further challenges to ridge augmentation in the posterior mandible. Autogenous block bone grafts from the retromolar area provide a safe and effective way to augment partially edentulous mouths (Cordaro et al 2002). In addition to the unrivalled osteogenic potential of autogenous bone, the use of autogenous bone blocks furnishes the mechanical stability needed to resist pressure and movement during healing and avoids the need to use non-resorbable membranes or titanium mesh, which may be difficult to manage in case of wound dehiscence (Fontana and Rocchietta, 2011).

The case report highlighted a patient presenting with an atrophic posterior mandible. The patient was successfully rehabilitated with autogenous bone block graft and subsequent implant placement. The use of xenograft and collagen membrane appeared to reduce graft resorption. However, there was no sign of xenograft integration to the grafted site.