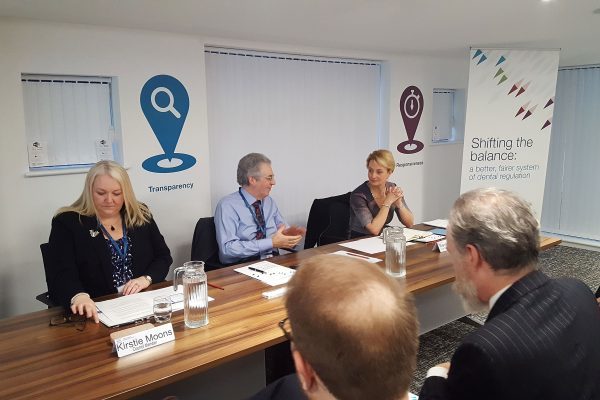 Kevin Lewis takes a closer looks at the GDC’s Shifting the balance: a better, fairer system of dental regulation.

As January drew to a close, the GDC published its call to arms, ‘Shifting the balance: a better, fairer system of dental regulation’. Would it be too cynical to suggest that the timing of the release of this quite weighty document is less surprising than some of its well-foreshadowed content?

The GDC has needed to work pretty hard to rebuild its credibility in the eyes of its own regulator, the Professional Standards Authority (PSA) and in fairness has been making some good progress in that regard – as recognised by the PSA itself in its latest end of term report. The bread on the other side of this GDC sandwich comes in the form of the anticipated proposals from the Department of Health (England), which has the lead role in taking forward the development work that flowed from the 2014 report from the Joint Law Commissions on reforming the regulation of the health and social care professions in the UK.

There are many themes here that support what the PSA itself put forward in the autumn, in its own proposals for the wider reform of healthcare regulation.

The GDC clearly took note of the PSA’s lead in creating clear(ish) water between the ‘system’ (statutory framework and the unwieldiness and slowness of legislative reforms) and the ‘processes’, which are more within the control of the various regulators, even if not wholly so. Neither missed the opportunity to make it clear that healthcare, technology and medical advances, patient expectations, and the pressures on the healthcare professionals themselves, have changed much more radically than the arrangements for regulating healthcare.

The GDC is not alone in having lost its way where fitness to practise (FtP) is concerned, and many of its fellow regulators have similarly spent far too much of registrants’ money on FtP with precious little public benefit to show for it.

The GDC had gone further and created a trail of collateral damage within the profession itself. It wasn’t helpful to have wasted so many years blaming the profession for generating so many ‘complaints’ and insisting that only the GDC knew where the holy grail was to be found. This latest document is hardly contrite, but it does acknowledge that the processes have left much to be desired. For example: ‘We have come to the conclusion that our approach (too much emphasis upon enforcement after the event) is outdated.’

There is much here to applaud and welcome. Improved ‘front-ending’ so that complainants/informants know up front what the GDC can and cannot, should and shouldn’t, will and won’t do… Realising at last that employers have more control than individual registrants over the working environment and the consequent potential for complaints, and making it clear to these parties that the GDC must not be used as an economically attractive tool for the abdication of their own responsibilities… Using its CPD powers to encourage registrants to take responsibility for their own, individual CPD needs and working collaboratively with CPD providers to enable registrants to access the resources they need in the optimal format, with quality assurance (at last) being on the menu for all involved… Exploring and exhausting other more appropriate and proportionate avenues before reaching for the big stick of FtP investigations… Reconnecting the GDC with all the other organisations in dentistry…

I could go on, but I have probably said enough to highlight the scale of the GDC’s ambition to improve itself and to invite the profession to help them in doing so.

But a closer look does invite a few questions of whether we are witnessing real insight here, or a further masterful management of the ‘us and them’ and ‘then and now’.

In effect it makes the inevitable finding that the GDC’s regulatory performance has indeed been impaired in the past, but argues that the light has been well and truly seen and there is consequently no ‘current impairment’ of the GDC, but only of the systems that the GDC is forced to work with. To illustrate this clever wordsmithing, I offer two separate references to the ‘current system of professional regulation in dentistry’:

‘(It) has encountered difficulty in maintaining the support of those regulated because it is often cumbersome and stressful for those subject to enforcement, and does not do enough to promote learning.’

‘Increasingly, (it) is losing the support of those regulated.’

Promote learning by whom, we wonder? And does losing the BDA’s judicial review challenge, a mauling at the House of Lords and an incandescent profession over the ARF hike two years ago really qualify as ‘encountering difficulty in maintaining support’?

Look, we could reopen old wounds here, or hope upon hope that the GDC really is turning a corner and not just choosing the racing line as it approaches a potentially tricky one. Nobody can say (yet) that the corner is turned because these are very early days and genuine progress needs to be demonstrated and maintained over time.

The GDC states that it wishes to build consensus that good, cost effective regulation goes beyond the pursuit of the GDC’s minimum statutory functions. Good luck with that one, especially when you are engaging with the BDA and explaining why the ARF is higher for dentists than for any other health profession.

But that aside, I find more to like than to dislike in the GDC’s latest pump primer and if you want to have your say, read the document for yourself and take the GDC up on its offer. We will be looking more closely at some of the issues on Dentistry.co.uk.