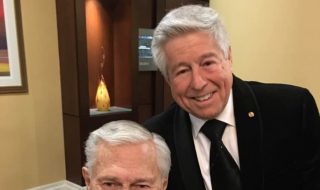 Dr Mervyn Druian has been announced as international president of the Alpha Omega Dental Society for 2017.

He becomes only the second European member to receive this accolade in the society’s 110-year history and was awarded in recognition for his service as chairman of the London Chapter and his lifelong commitment to promoting the tenets of the Alpha Omega International Dental Fraternity.

‘I believe we, as dentists, belong to one of the luckiest professions,’ Mervyn Druian said.

‘When people ask what one gets out of Alpha Omega, I smile, I think of the friendships local, national and international.

‘I think of the philanthropy in the past, in the present and what will be done in the future.’

The Alpha Omega International Dental Society is the oldest international medical organisation and was founded in 1907 at the University of Maryland School of Dental Medicine.

The Alpha Omega international community comprises over 6,000 members worldwide and is internationally recognised for its charity work and dental education, especially the founding of Israel’s two dental schools and the Holocaust Survivors Programme.