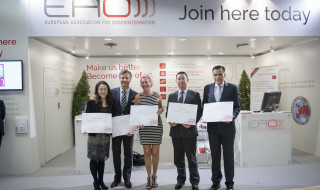 The European Association for Osseointegration (EAO) has announced the winners of five scientific prizes, along with the names of the five candidates who successfully completed its certification programme.

The winners were presented with their awards and certificates by EAO president Björn Klinge (now past president, succeeded by Alberto Sicilia) at a ceremony held on 1 October, as part of its annual EAO Congress.

More than 2,600 delegates and industry representatives from countries as far afield as Japan and Canada attended the meeting at the Palais des Congrès de Paris in Paris, France between 29 September and 1 October.

This year, 609 scientific abstracts were accepted for presentation at the meeting. Sixty-eight were shortlisted for a series of prestigious scientific awards, and every submission was published in a special supplement of Clinical Oral Implants Research, the EAO’s peer-reviewed journal.

The European Prize for Basic Research in Implant Dentistry was awarded to Ralf Kohal (Germany): ‘Evaluation of a new long lasting zirconia-based composite for oral implant fabrication: an experiment in the rat’.

Five candidates were also presented with the EAO’s certificate in implant-based therapy during the ceremony. This is the only Europe-wide standardised assessment of skills and expertise within the field of implant-based therapy. Each candidate had to submit six clinical cases, sit a multiple choice examination and be interviewed about their cases.

Professor Niklaus P Lang, the founding editor of Clinical Oral Implants Research, received a medal and was awarded the status of Honorary Membership of the EAO.