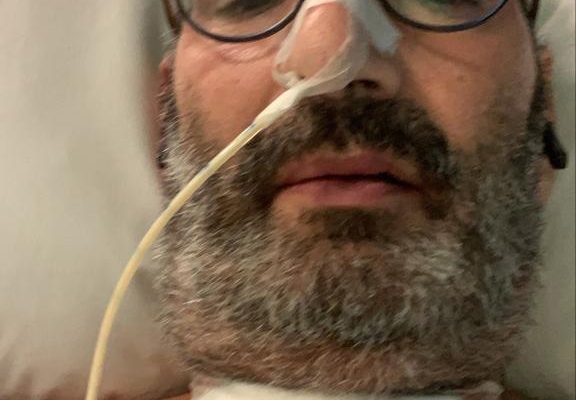 Jacobs contracted the virus in March, initially displaying only mild symptoms. But as his condition worsened he was placed on a ventilator to help him breath.

He believes it was only thanks to the efforts of dedicated NHS staff that he pulled through. Now, after returning home, he wants to repay the nurses and doctors who helped him.

‘I am so thankful to everyone. Not just the doctors and nurses, but the whole pyramid of people working towards you getting better.

‘There are porters, people analysing your blood tests, thousands of people. When I was in there I had no idea what was going on.

‘It gives you a lot of hallucinations and fantasies; when I woke up four weeks had gone by.’

Tony Jacobs decided to go to hospital after he started struggling to breathe or move up and down stairs.

Doctors advised he may have COVID-19 after seeing him in a walk-in centre in Manchester. As his condition continued to decline, Jacobs’ family started to fear the worst.

But after recovering and several more days in hospital, Jacobs could return home. The nurses and staff gave him a round of applause as he left. And close family members and friends lined the streets to applaud him on his return home.

‘It was brilliant to see him go home,’ said Tony Jacobs’ son, Rob. ‘But it was quite shocking seeing how he was. He left fit and well, working as a dentist and he was a world away from that.

‘It is going to be a slow process, but we are so grateful he has come out the other side.’ Tony Jacobs is now slowly building his strength and is on the road to recovery.

In the meantime Tony Jacobs and his family are looking to raise money for the staff that helped save his life. They have set up a fundraising page and are asking people to donate to help the hospital and staff.

You can donate at www.gofundme.com/f/thank-you-to-the-team-who-looked-after-tony-jacobs.