NHS dentistry under the spotlight 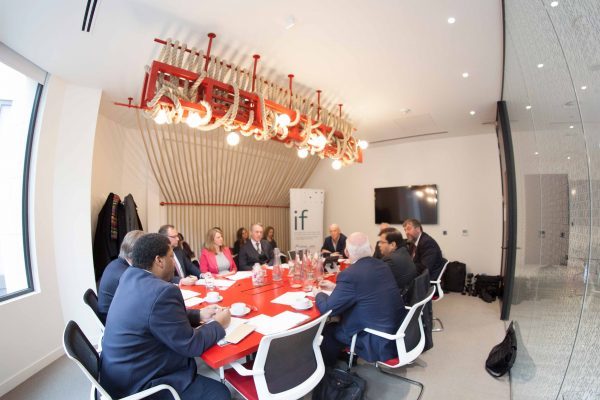 NHS dentistry under the spotlight

In the second of a two-part article, Sophie Hatton reports back from Simplyhealth Professionals’ ‘If’ roundtable debate, which brought together several of UK dentistry’s key opinion leaders to discuss the future of NHS dentistry.

Previously on Dentistry.co.uk we brought you part one of Simplyhealth Professionals’ ‘If’ (In Front) roundtable debate – a discussion focused on the current state of, and the future of, NHS dentistry in the UK.

The debate comes at a pertinent time in the political schedule of UK dentistry; a new NHS dental contract originally scheduled to launch this year has seemingly been pushed back by government with no sign of resolution. And, with NHS dental care professionals currently operating under an NHS contract that is widely recognised as ‘not fit for purpose’, it’s fair to say that the uncertainty surrounding the future of NHS dentistry is having a detrimental effect on the profession.

While dissatisfaction stems from a number of sources, such as cuts to primary care budgets, huge real terms pay decreases for dentists over the past five years, UDA clawback, and lacklustre efforts by government to improve child oral health rates in England, a major issue continues to be dental contract reform.

In the last issue of Dentistry, our report covered the first half of the latest If roundtable debate, tackling issues surrounding the NHS primary dental care budget, and reconfiguration of the dental care system to make it work better for all stakeholders.

In this second report, we turn our attention to the latter half of the debate. If roundtable chair, Martin Fallowfield, head of professional relations at Simplyhealth Professionals, offered up some more key issues facing UK NHS dentistry: the current child tooth decay crisis, sanctions and litigation in UK dentistry, and the prospects for the profession five years from now.

Although oral health rates are improving among children in England, still almost a quarter of five-year-olds in England (24.7%) suffer from tooth decay, according to Public Health England. Martin Fallowfield asked the panel, ‘Is the answer to [improving child oral health] to divert more money to child oral health?’

Ian Mills, senior vice dean of the Faculty of General Dental Practice, highlighted the paradox that ‘It’s a sad indictment when child oral health is improving but general anaesthesia (GA) rates amongst children [to undergo tooth extractions] are increasing.’

Various members of the panel suggested that one reason for an increase in child tooth extractions was that suitable avenues offering alternatives to GA for children outside of a hospital setting are not as widely available to patients, due to continued budget cuts. These include community dental services and sedation services.

The British Dental Association’s chair of General Dental Practice, Henrik Overgaard-Nielsen, said the statistics reinforced the belief that more children are undergoing tooth extractions: ‘We’re spending £36 million per year on general anaesthesia for children to undergo extractions. But the failure isn’t so much that other avenues have closed, but that there is no early intervention’, he said.

‘Childsmile in Scotland and Designed to Smile in Wales are doing well, but England’s Starting Well campaign is too little too late’.

Conversely, NHS England’s Starting Well programme is focused on those who are not currently visiting the dentist, and under one-year-olds to promote advice on oral healthcare. The programme only operates in 13 deprived areas in England, and is not currently nationwide.

Ben Atkins, of Revive Dental Care, was concerned over the lack of care available in poorer socioeconomic areas, saying: ‘If you look at the epidemiology of caries, rates of the disease in children have improved overall, but not in lower socioeconomic areas. Should we put more resources into these areas where people are at higher risk of other health issues?’

‘Resources and care have to be tied in with other areas of healthcare’, answered Catherine Rutland, head of professional services at Simplyhealth Professionals. ‘It’s a lifestyle issue, a family issue. That’s why it’s such a battle to treat.’

‘NHS advice for new parents is embarrassingly lacking in oral health advice’, added Dentistry editor, Julian English. ‘It’s practically law to register a new baby with a doctor – it should be the same for dentistry. If children can get in front of a dentist early on, a lot of child oral health issues can be nipped in the bud’.

To summarise, Martin spoke of the optimism expressed about child oral health initiatives, but lamented the lack of progress from NHS England. ‘We need something like Childsmile – the BSDHT is working on putting dental hygienists and therapists into nurseries and there’s been huge enthusiasm from the profession for this. The NHS really needs to do more on this’, he said.

‘If this was incorporated into the new NHS dental contract, we wouldn’t need these half-hearted measures to appease the government, the public, and the profession’, concluded Dental Protection’s Len D’Cruz.

Following the sobering discussion on child oral health, Martin unironically posed the next debate topic: ‘Is morale getting better in dentistry?’

The Care Quality Commission’s John Milne began the debate: ‘Morale and fear are endemic within the dental profession. I can only speak for the CQC, but we are trying to reduce fear by working with the profession, and I think we’ve made big strides.

‘As a practitioner, I’m very aware that I’m one slip away from the glare of the GDC. This fear inhibits innovation, and from working out the right solution for that particular practice.’

‘It’s true, in both NHS and private practice, the fear is there’, added Catherine.

‘But there is good news’, said the Dental Defence Union’s John Makin. ‘There’s been  about a 30% reduction in complaints made to the Council. We [at the DDU] work with the GDC to get them to tell the public what they actually do, and what they don’t do, and how to correctly direct patients. We’ve also worked to redirect complaints when they do come in, even if the patient has misdirected their complaint to the GDC. As a result, 40% fewer cases have gone to hearing, from that first 30%.’

Like many a problem in NHS dentistry, John Makin attributed many complaints to the NHS dental contract.

‘Issues arise because of the ambiguity of the current contract, leading to complaints of dishonesty’, he said. ‘We’ve got to get a grip of the NHS contract so this nonsense doesn’t happen’.

‘The CQC, the GDC and the NHS are working together to reduce this “multiple jeopardy”’, added John Milne, referring to the fact that dental professionals are subject to disciplinary action from all three organisations. ‘Where there is a problem, let’s get it looked at by the right body’.

Martin Fallowfield concluded the debate with a look toward the future. ‘As a mixed economy already exists with state-funded and patient-funded primary dental care available, where will the profession be in five years’ time?’ he asked the panel.

‘My only claim to fame in life is that I predicted the 2008 stock market crash, so I predict that we’ll still be waiting for a new dental contact in five years’ time’, Julian English confidently replied.

‘My concern in five years’ time is for professionalism’, said Henrik. ‘We’ve started to sell ourselves, to a greater extent. I think there’s a government move to getting rid of professionalism. We should be professional and do the best for our patients, but the problem arises when patients start acting like consumers, and that worries me.

‘In five years, there will be more use of dental care professionals. I’m not convinced that dental therapists are the answer to all our problems – they need surgeries, nurses, etc. I can only see a saving through the use of therapists from a government perspective. But, there is space for nurses to practise prevention.

‘Dentists are team leaders and that is where they should be. That’s what I hope for. Plus, a reformed contract that’s good for patients and dentists’.

The final word was taken by the CQC’s John Milne: ‘In five years, there will be five years’ fewer of the heavy metal generation to treat. We’ll be much more comfortable working in teams. Therapists will work on a salaried basis.

‘I’m optimistic about the profession in five years’ time. People will still have the same health issues that we as a profession are able to treat.

‘Everyone knows change needs to happen. We’ll be a profession with a good status within society, and we’ll have enabled more of the population to achieve good oral health. After all, isn’t that what we’re all here for?’