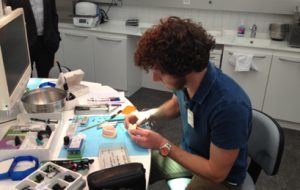 Simon Ashby explains what went on during his Ivoclar trip to Schaan in Lichtenstein.

I have never given much thought to where those little compules of composite come from. Nor how, thankfully, you never get any little black flecks or bits of fluff as you extrude onto a critical incisor attached to a demanding patient: how grateful we should be.

With improvements in tooth-coloured materials we can now offer our patients greater aesthetics when we need to intervene. With advancements in materials come greater demands on the operator and I wanted to make sure that as a practice we were using the current materials to best effect and where better to learn these skills than at the place they are made.

So off I went with two colleagues, Steven Atkinson and Gareth Fay, to Ivoclar’s headquarters in Schaan, Lichtenstein. Various courses are run from Schaan, and we chose the bonding course. The cost of the two-day visit including a days course, hotel, meals and flights, was a very modest £600.

We flew from Manchester to Zurich in November and met with Chris Parker and Annie Evans from Ivoclar UK and were taken by coach to Lichtenstein, which took an hour and a half.

We were given a fascinating tour around the facility after donning the usual barrier dust clothing that’s how they avoid the black flecks! We all watched as a large mixing machine churned one of two daily batches of Tetric all under the glow of yellow lighting, rather like Willy Wonka’s chocolate factory. There was enough in one batch for 250,000 compules. We later learned about the evolution of Ivoclar’s porcelains and the development of my favourite, lithium disilicate E.max.

After the comprehensive tour, we were again driven back into Austria a few miles away to our hotel. The hotel was one of three used by the company and as we were a small group of seven we were in their favourite. The hotel Gutwinski was very comfortable and situated in the centre of the small town of Feldkirch. After a quick rest we assembled as a group for dinner. Both Chris and Annie were excellent hosts and we were soon all made to feel very comfortable and bonded as a group.

The next day, after a great Austrian cooked breakfast, we were taken back to the splendid education centre in Schaan. We spent the rest of the day listening to informative lectures and then were given the chance to practise using Ivoclar’s latest bonding materials in their phantom head facility. In the evening we were taken out by Chris and Annie, again courtesy of Ivoclar, to the Kerran panoramic restaurant. This adventure involved a steep cable car ride up the side of the mountain and was spectacular.

The evening continued back at the hotel and I particularly enjoyed hearing about the concerns from the other dentists in the group who work in a variety of different practices confirming we all worry about the same things.   We were delivered back for our flight home the next day and we all felt quite sad to leave. The trip home was made more interesting by the three of us being seated next to the ‘apparently’ popular group Little Mix, a fact that was of greater interest to my teenage patients the following week than the trip to the ‘tooth’ factory.

The three-day trip was great value being subsidised by Ivoclar. The educational element was excellent and the social side great fun. If you haven’t already done the trip, I would strongly advise you to take up the offer from Ivoclar.