Electronic toothbrush sees what you don’t 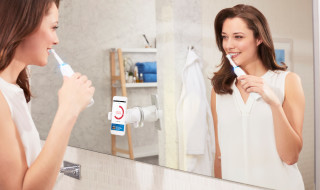 Electronic toothbrush sees what you don’t

Oral-B Genius features Position Detection Technology, which combines cutting-edge motion sensor technology located in the brush, and video recognition using the smartphone’s camera, to track areas being brushed so that no zone is missed. Patients receive instant feedback on the brushing of each zone of the mouth via the Oral-B app 4.1, including guidance on pressure applied and brushing duration. These features, combined with the Oral-B Oscillating-Rotating-Pulsating Technology and the round brush head, are designed to help patients improve their oral health.

Louis Mackenzie, GDP and clinical lecturer at the University of Birmingham School of Dentistry, commented: ‘Optimal tooth brushing is a fundamental component of oral home care routines for all dentate patients. However, non-uniform brushing techniques can result in both under- and over-brushing in certain areas of many patients’ mouths.

‘The Oral-B Genuis and app uses digital guidance technology to bring awareness to what’s actually happening each time patients brush and gives them real-time guidance to improve every brushing session.

‘Now our patients can follow recommended brushing protocols prescribed in practice – with their own professionally guided brushing routines’.

Using Oral-B Genuis, patients are able to actively monitor their brushing routine via the Oral-B app 4.1. This real-time feedback enables patients to brush for the dental professional-recommended two minutes, not apply too much pressure while brushing and, thanks to the new Position Detection, never miss those commonly missed zones.

‘It is the next big thing after the introduction of the electric brush overall as it helps eliminate the wrong behaviours in brushing. We made a commitment to digitally connected brushing two years ago and to date we have received almost a million downloads of the Oral-B app.

‘We have built upon that solid foundation to reinforce our position as the world’s leader in oral care technology with the evolution of our intelligent brushing system – the Oral-B Genius.’