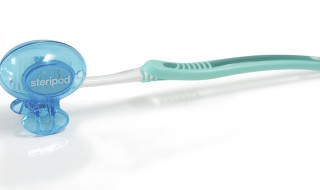 Most people don’t realise that every time they flush the toilet, an aerosol spray of tainted water is released with droplets able to land as far away as 10 feet. Researchers from the University of Alabama found that brushes stored in the bathroom are contaminated with faecal matter lingering in the bristles. Toothbrushes aren’t particular about whose faecal matter it is, so it’s likely it won’t just be patients’ own which is going into their mouth every time they clean their teeth!

It is likely your patients’ toothbrush will have been exposed to a high proportion of pathogenic contaminants such as E.coli and staphylococcal. However airborne bacteria are not the only pollutants which infect a toothbrush, if it touches another, bacteria, viruses and fungi can pass from surface to surface, spreading the likes of oral herpes, candida and the HPV virus. Now consider if the patient’s oral or systemic health is compromised in any way – this can have serious implications.

Fortunately, it is now possible to safeguard a toothbrush in a new way.  Hot on the heels of its success in the USA, the Steripod toothbrush protector is now available in the UK. Easy to use, Steripod simply snaps onto the head of any manual or electric toothbrush, creating a protective ‘pod’ which physically surrounds the head and shields it from both airborne and cross contamination.

Steripod is designed to protect it against environmental contamination for up to three months by exuding “active vapours” – a laboratory formulated thymol compound which is also used in a number of mouthwashes and oral anti-septics. The compound is encapsulated in plastic within the pod which has small holes to allow the thymol vapours to protectively encircle the toothbrush bristles. The product has been specially designed so that air can circulate freely which means the brush can dry naturally – contaminants require a moist atmosphere to multiply most effectively, so the drier the brush, the lower the risk of contaminants multiplying in the bristles.

There is a broad range of patients for whom a Steripod will offer protection. Importantly for anyone undergoing orthodontic treatment, carrying a brush to clean their teeth after meals is imperative – so adding a pod to an orthodontic starter kit could lower patients’ risks of oral health problems throughout their treatment.

Others for whom Steripod should be recommended include people travelling for work or pleasure; festival goers, kids going off to camp as well as the increasing number of people aware of the health and aesthetic benefits of regular brushing and like to pop a toothbrush in their gym, hand or wash bags.

Unlike other toothbrush sanitisers, Steripod is completely portable and does not require batteries or cables, meaning that it’s easy to protect a brush wherever it is used; at home, on holiday, or out and about. Nor does the active ingredient actually touch the bristles so patients are not a risk of ingesting unwelcome chemicals. It is also highly cost effective at £4.99 for a pack of two – providing six months of protection. For these reasons Steripod makes the ideal adjunct to any practice selling toothbrushes as it is designed to be changed at the same time as a manual brush at three monthly intervals.