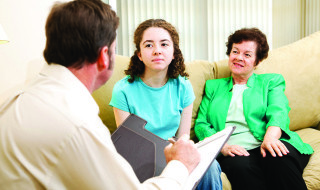 When treating adolescent patients, it is difficult to decide whether parents should be allowed into the surgery. Colin Wallis explores a range of issues that need to be considered

There are few topics in practice management that are more controversial than those concerning the presence of parents in the surgery during clinical procedures. Several aspects need to be considered. Primarily, what is best for the patient in terms of compliance and treatment efficiency; secondly, the situation regarding consent and thirdly, the need to ensure appropriate medico-legal protection.
Before a patient reaches adolescence, a parent can of course offer valuable reassurance and is likely to have a positive effect on compliance. However, the majority of orthodontic patients will have at least some of their treatment during adolescence and the presence of a parent should be reassessed.

As a child approaches puberty the relationship with their parents tends to change. Adolescence is a natural and essential period of adjustment between childhood, which is characterised by dependence on authority figures, and adulthood, which demands self-sufficiency and the assertion of individual values¹. The transition commonly incorporates an emotional separation from the parent and may surface in the orthodontic environment as a tension between the desired values of the patient and those of authority figures.
Some orthodontists insist that their very first encounter with an adolescent patient should take place without the parent in the surgery. Some patients will feel pressurised by their parent to accept treatment and this first meeting should be an opportunity to allow them to express their own views. At this point, the patient should be made aware of the need for treatment; if they are content to accept some irregularity and refuse or defer treatment on the understanding that there is no long-term risk to their dental health, then this decision should of course be respected regardless of any subsequent input from their parent.
Compliance, in terms of appliance care and oral hygiene, is unlikely to be favourable if a patient is reluctant to have treatment. Tensions may arise out of differing views on health benefit. While adults tend to place a high value on health, adolescents generally consider themselves to be invincible and resistant to poor health.
Health education is part of the national curriculum and young people are now bombarded through the media with information on the risks of smoking, drugs, drinking and unprotected sex, yet many ignore such advice. In their view, the risks attached to orthodontic treatment are unlikely to be a cause for concern.

An additional burden is placed on the orthodontist as adolescence and orthodontic treatment tends to coincide with each other. As well as the problems of managing complex appliances and difficult malocclusions during a phase of rapid physical change, it is necessary to negotiate this challenging period of psycho-social development. As compliance is key to success, the negativity that may arise must be channelled and redirected in a positive way, and the orthodontist has a unique opportunity to respond to these issues. The developing ability of an adolescent to make rational judgements will, one hopes, direct them to accept our advice at an appropriate time.
In a world seemingly dominated by authority figures such as parents and teachers, the orthodontist has a unique opportunity to develop a positive relationship, engaging in conversation on an adult level. Previous decisions regarding their health and welfare have been made for them, but many will grasp this radical shift of responsibility. The responsibility should now be extended into the treatment itself, the orthodontist becoming less of an authority figure and enabling the patient to acquire independence and individuality. Small choices taken by patients, such as colours of appliances and modules, as well as some discussion over final tooth position, for example, can enhance feelings of individuality and make patients feel that they have at least some control over their treatment.
According to Freeman, ‘Recent research examining non-compliance has clearly shown that it is the conflict between parent and adolescent that influences the success of continuing orthodontic treatment’². While compliance may be improved by the exclusion of a parent from the treatment area, other issues relating to professional conduct and the law need to be considered.
Parents universally desire optional healthcare for their children and rather than being made to feel excluded from this responsibility, it is necessary for the orthodontist or treatment coordinator to explain that this arrangement can carry advantages. In particular, parents should find some comfort in the knowledge that the orthodontist is assuming responsibility for this aspect of their child’s care. It is understood that, at the outset, the diagnosis and treatment plan were explained in detail and the parents were assured that they will be kept informed of any significant problems or changes to treatment.

“While adults tend to place a high value on health, adolescents generally consider themselves to be invincible and resistant to poor health”

Orthodontic procedures are generally non-traumatic, but may be accompanied by some anxiety. Although some younger patients benefit from the security of a parent close by, Kent and Blinkhorn have observed that, ‘In many cases… some parents exhibited behaviour that would tend to increase the child’s anxiety’³. The ground rules should be established before treatment commences and cooperation sought, in terms of flexibility over appointment times and the need for continuing parental support throughout treatment. In the vast majority of cases, parents welcome this shift of responsibility and generally recognise that orthodontic management requires a high level of concentration and the presence of any relative or friend of the patient in the treatment area can create at least some level of distraction. Furthermore, some conversations with parents may be unrelated to the treatment itself and patients could feel unsettled if the orthodontist appears to have shifted their focus away from the procedure.
It is important to consider the ongoing problem in many cases of poor oral hygiene or appliance damage during treatment. Discussions regarding plaque control in particular can certainly lead to tensions between patient and parent. For most patients it is necessary to give at least some oral hygiene instruction at every visit and I would very rarely do this with a parent present in the surgery. Many parents in this situation claim that they constantly berate their child over tooth brushing but are generally ignored. In the surgery, they may seize the opportunity to discharge the responsibility of some disciplinary action to the orthodontist, at the same time creating an opportunity to continue the chastisement at home.
Constant breakages frequently lead to a similar scenario and such tensions may compromise the relationship between the patient and orthodontist, as well as contributing to an increasing negativity about their treatment. Furthermore, adolescent patients are generally very self conscious and any discussions about oral hygiene are likely to be embarrassing. I can only refer to personal experience, but have found that a one-to-one discussion without a parent or sibling present in the surgery is far more likely to elicit a positive response.

Health and safety, and also public liability insurance issues may arise if children (siblings and friends) are not closely supervised in the surgery while the orthodontist and nurse are busy treating a patient.
When it is clear that the needs of the patients and parents have been met, it is necessary to ensure that the orthodontist is also protecting his or her own interests.
First, it should be understood from a legal viewpoint that when a minor is discharged into their care, they are acting in loco parentis. While treating a patient the orthodontist is responsible for all aspects of their care and welfare.
The notion of ‘Gillick competence’ arose from ‘Gillick v. West Norfolk and Wisbech Area Health Authority’ in 1985.  Mrs Gillick objected to her daughter being prescribed contraception without her knowledge. It was concluded that children under 16 could have the right to consent provided they were judged to be of sufficient intelligence and maturity to fully understand what is being proposed and the associated risks. Laws of consent vary considerably across Europe, the lowest being in Spain, where the age of consent regarding sexual activity is 13.
Second, patients have usually been referred by their general practitioner who has: ‘assumed a duty of care that necessitates a willingness to refer… if the task in hand is beyond the dentist’s own skills’. The same duty of care applies if the orthodontist requires assistance from other specialties, and it is essential to keep the parent, as well as the referring practitioner, informed with regard to all aspects of the patient’s care.
Third, in the case of a minor, it is necessary to obtain a valid consent form signed by the parent or guardian prior to commencement of treatment and to ensure that another member of staff is always present in the surgery. Occasionally, however, cultural issues may arise that might influence the orthodontist’s preference. In certain religions and traditions, the parent will insist on accompanying a young female patient in the surgery with a male orthodontist even if the nurse is present.
I prefer not to have parents in the surgery during clinical procedures, and whether you choose to practise orthodontics with the parents there or not remains a personal decision.

Dr Colin Wallis qualified from the Royal London School of Medicine and Dentistry in 1975, followed by a surgical post in Toronto. After 10 years in general practice, he returned to full-time training at UCL and obtained his MOrth in 1991. This was followed by Specialist Practice in Epping, where he works alongside two colleagues and a therapist. Colin is also a part-time clinical supervisor at the Eastman, and chairman of the Orthodontic Specialist Group of the BOS.