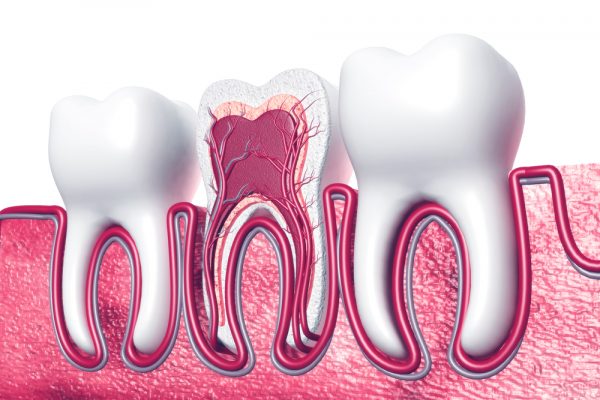 The answer, researchers from Zhejiang University School of Medicine say, lies in a liquid solution they created by mixing calcium and phosphate ions into an alcoholic solution with the organic compound trimethylamine – this in turn produced tiny clusters of calcium phosphate, the main component of enamel, with a diameter of just 1.5nm.

Once applied to damaged tooth samples, the researchers found that gel had helped create a new layer of enamel about three micrometres thick, just over the course of 48 hours.

‘Our newly regenerated enamel has the same structure and similar mechanical properties as native enamel,’ said Dr Zhaoming Liu, a co-author of the study which was published in the journal Science Advances this week.

‘We hope to realise tooth enamel regrowth without using fillings which contain totally different materials and we hope, if all goes smoothly, to start trials in people within one to two years.’

The team behind the research say the materials are cheap and can be prepared on a large scale.

‘After intensive discussion with dentists, we believe that this new method can be widely used in future,’ says Dr Liu.

The gel’s repair of tooth enamel ‘would be permanent’, according to the researchers, led by Professor Tang Ruikang at the university’s chemistry department.

Dr Sherif Elsharkawy, an expert in prosthodontics at King’s College London, told The Guardian that he found the research very exciting.

‘The method is simple, but it needs to be validated clinically,’ he said.

He also said that that it could be several years before the method could be used in dental practices.