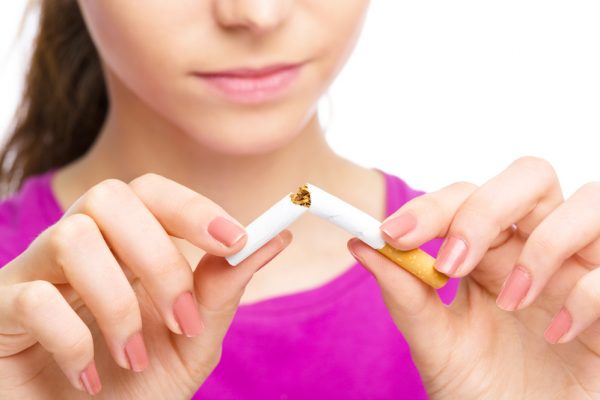 The findings, published by the Cochrane Library, contained the results of 33 trials in eight countries, encompassing more than 21,000 participants trying to give up smoking.

This included 10 trials looking at pregnant women trying to quit.

It was found that people were 50% more likely to stop smoking when receiving a financial reward than those who were not.

The value of the rewards ranged from £35 to £912 in the form of cash payments, gift vouchers or deposits paid by participants that were later refunded.

Dr Caitlin Notley from the University of East Anglia’s medical school, who led the study said: ‘In comparison to the total amount that the NHS has to set aside in the UK for smoking-related diseases, the cost of providing incentives is incredibly small in comparison.

The team found that the size of the monetary reward on offer made no difference to the chance of quitting, and that even small rewards increased the likelihood of a smoker quitting.

Previous work had found concerns with using financial incentives to quit, suggesting they were only effective for the time they were in place.

However, Notley and her team have collated more recent results, all of which look at the effects in the long term, at least six months after the smokers initially quit.

‘Range of options should be offered’

‘Incentives support people in the early stages of trying to quit smoking, which are the most difficult, and once people have made that health behaviour change and the incentives are removed, they’re more likely to stay abstinent from smoking in the longer term.’

However, Notley warned that incentives did not work for everyone, and said a range of options to help people stop smoking should be offered, such as encouraging the use of e-cigarettes.

Dr Penny Woods, the chief executive of the British Lung Foundation, said: ‘Offering financial incentives to help people quit smoking has been dismissed in the past, so it’s fantastic to see strong evidence that these innovative schemes work.

‘Local authorities should consider this new research when designing comprehensive stop smoking services, as it could help target those in our communities who struggle the most to give up cigarettes.’

‘Incentives for smoking cessation’ is published by the Cochrane Library on July 17, 2019.