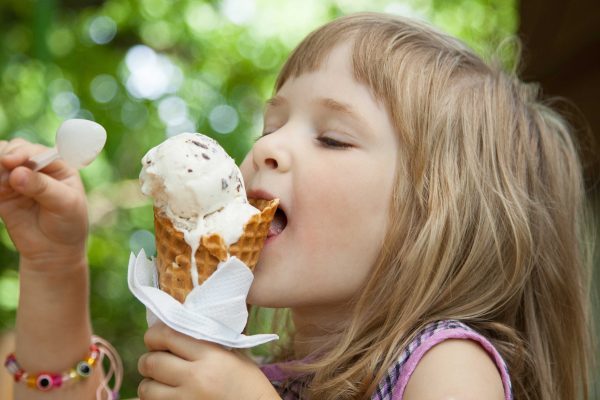 The poll, carried out by Mydentist, found children were more likely to eat ice creams, lollies and soft drinks in the hot weather.

Almost a quarter (24.5%) of parents think they give their children twice as much sugar during summer months, with 11.5% saying it could be more than five times the amount.

‘It is tempting to beat the heat with soft drinks and ice cream, but parents must recognise the damage these sugar-laced confections can do,’ Russ Ladwa, chair of the BDA’s Health and Science Committee, said.

‘Tooth decay is now a wholly preventable epidemic, and the number one reason a child will be admitted to hospital.

‘Yes, we need parents to take responsibility over what they buy, but Ministers also need to force industry to change the way they formulate and market these products.

‘Ultimately if you want to keep the kids cool and hydrated, reach for the water.’

The Government recently announced plans to ban the sale of sugar and caffeine-filled energy drinks to children.

It is also considering a ban on the sale of unhealthy foods and buy-one-get-one-free deals being displayed at checkouts.

The new measures have been announced in its Childhood Obesity Plan, which aims to halve the number of obese children by 2030.

‘Parents want what is best for their children, but keeping them healthy and active can be difficult,’ Jeremy Hunt, Secretary of State for Health, said.

‘It is near impossible to shield children from exposure to unhealthy foods.

‘Parents are asking for help – we know that over three quarters of parents find offers for sugary sweets and snacks at checkouts annoying.

‘It’s our job to give power to parents to make healthier choices, and to make their life easier in doing so.

‘Today we are taking steps to ensure that by 2030, children from all backgrounds have the help they need for a healthier, more active start in life.’

3d
|
Oral Health
"Company" would like to send you relevant email communications to this webinar, by opting in to receive these emails you are agreeing to be sent email communications by "Company".
You can opt-out at any time.
Dentistry Online uses cookies to give the best experience. If you continue to use our site, we will assume that you agree to the use of such cookies. Read More.
Accept