Pushed to the limits 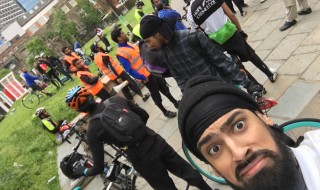 Pushed to the limits

Starting in the early hours of Saturday 21 May, Shiraz and his group set off from the familiar district of Aldgate, traversed through the city before hitting their first checkpoint in Uxbridge.

The second segment was hard work, cycling up and down through the hills of Wycombe and Princes Risborough, before hitting the final segment, an all out dash to a farm just north of Oxford where the cyclists were met with food and warmth.

‘Being relatively physically active, I thought this would be a difficult task, but no where near as tall an order as it indeed was,’ Shiraz, who has never professionally cycled, said.

‘Being honest it really is such a feeling of achievement as at moments I was close to tears from the physical exertion.

‘I admit that this could have been prevented with a more thorough training regime in the build up, but cycling for over seven hours really pushed me to the limits, and I felt like I hit the wall.’

The group of riders, alongside Shiraz, undertook the ordeal to raise money for the Ummah Welfare Trust.

The trust was able to raise a staggering £51,000+ and, with its 100% donations policy, all the money raised will serve wonderfully to those who have lost homes, infrastructure and family in the atrocities in Gaza.

‘This was a fantastic opportunity to remember how lucky we are to be in this wonderful profession,’ Shiraz continued.

‘The mere fact that I was able to do such an event for a charitable cause is a dream that children, men and women cannot even fathom in Gaza, so I am grateful to be in the position I am to have done what we all did.’

You can still donate to the cause by visiting www.justgiving.com/fundraising/S-Khan12.