Sugar tax – are you for or against? 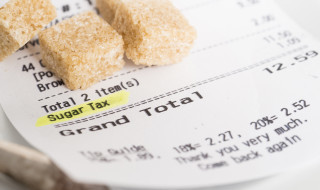 Sugar tax – are you for or against?

Claire Stevens and Alun Rees argue for and against George Osborne’s plans for a sugary drinks tax.

In his 2016 Budget, Chancellor of the Exchequer George Osborne unveiled a ‘sugar tax’, whereby in the next two years, producers of sugar-added soft drinks will be taxed according to the volume of beverages they manufacture or import.

Whilst the tax  will be imposed on sugary drinks  producers, the levy will be passed to consumers through product price increases, raising an estimated £520 million per year. The tax revenue will be used to fund sports programmes in schools, Mr Osborne said.

There are a number of high profile advocates and opponents to the sugar tax. MP Dr Sarah Wollaston made a compelling argument for its benefits when debating the issue in Parliament, while a further Parliamentary debate on Britain’s child tooth decay crisis prompted dentist and MP, Sir Paul Beresford, to comment that a sugar tax would not ‘make one iota of difference’ to the rate of dental caries in children.

Here, two respected members of the dental profession – Claire Stevens, on behalf of the British Society for Paediatric Dentistry; and Alun Rees, a dental business coach and former dentist – lay down the argument for and against the sugar tax.

What do you think? Do you believe the sugar tax would help relieve the growing rates of dental caries in Britain’s children? Or do you believe that a tax on sugar simply serves to penalise consumers, without promoting healthier alternatives? Join in the debate by tweeting your view to @Dentistry, or by emailing [email protected]

Every week I extract multiple teeth under general anaesthesia. It is not unheard of to perform a clearance in a two-year-old child. Would a sugar tax stop this? No. Might it contribute to a reduction in the nation’s sugar intake and potentially reduce inequalities in oral health? I believe it will. Last year we consumed an average of 230 litres of soft drinks per capita (British Soft Drinks Association, 2014). Dental decay is the most common reason for a child aged between five and nine years old to be admitted to hospital in England (Health & Social Care Information Centre, 2013).

To date, the main focus on tackling obesity and reducing sugar consumption in children has been education, urging parents to buy healthier foods, but this has not been successful. So how do we go about reducing childhood sugar consumption?

Jamie Oliver’s Sugar Rush put the idea of a sugar tax firmly on the table. However, the introduction of the tax on sugary drinks may be perceived by some as too ‘nanny state’.

Making ‘healthy’ foods cheaper would make them more appealing to families on tight financial budgets. Research looking at consumer habits during the recession demonstrated a decline in the average nutritional quality of foods purchased, with a move towards processed sweet and savoury food and away from fruit and vegetables (Griffith et al, 2013). Healthy foods are not being adequately incentivised and this must change. Instead, companies are adding extra margin onto healthier products, in the belief that they are being purchased by more affluent consumers. The consequence is the nutritional exclusion of the poor (Sweanor et al, 2013). We need to explore ways of incentivising healthy choices for both consumers and industry.

A sugar tax alone is not the answer. I would argue that clearer labelling would help to stop the rot. We need to help people to make healthy choices by empowering and educating them to read and understand the information provided on food labels.

Food manufacturers should be urged to adopt ‘nutritional reformulation’ as proposed by the chief medical officer, Dame Sally Davies (Davies, 2012). Gradual reduction in the amount of sugar added to foods is already underway and should continue. Sugar substitutes such as aspartame, or more natural forms like stevia have been tested and found to be safe.

No potentially sugar-reducing solution will work in isolation. I’d like consistent and clear food labelling to be mandatory on all products, for us to explore urgently the feasibility of incentivising healthy food and as healthcare professionals I’d like us to continue to educate and support our patients. Most of all, I believe we need a collective and committed approach, which would see professionals and government working with industry. Should we support a tax on sugary drinks? Yes, as part of a raft of measures already proposed by Public Health England (2015).

Let’s start with facts. The rise in obesity that started in the 1980s has now reached epidemic proportions. Britons consume far too much sugar – three times as much as health experts recommend and ‘government action is needed’.

And, in those four words comes the biggest challenge. David Cameron told his party conference in 2011 that a ‘fat tax’ would prevent health costs soaring and life expectancy falling. Five years have passed without any action.

So how will the ‘sugar tax’, actually work? Supposedly, the money collected will be channelled to provide funding for sports education in schools. So will that be a big pot marked ‘Health education – obesity only’? I do not believe that any government has the will to do it.

Even if the tax had the significant effect of reducing the sales of the targeted drinks by 50%, what effect would that have on the overall problem? The cause of obesity is multifactorial and there is no simple solution.

Why be specific about drinks? Dentists have advocated a tax on confectionery for decades. We know that many confectionery sales are an impulse in response to advertising. Deal with that and get rid of sweets at checkouts and petrol stations.

Why not tax it in the supply chain with a levy on all sugar-containing food ingredients? Tax sugar, high-fructose corn syrup, fruit juice concentrate and other added sugars at the point where they’re manufactured or imported, essentially taxing everything with added sugar, at a level appropriate to its sugar content.

Amongst the acolytes for a sugar tax is Jamie Oliver, whose recipe for ‘Scrumptious sticky toffee pudding’ contains nearly 2lb of sugar. Shouldn’t the BBC be made to give public health warnings with every episode of The Great British Bake Off?!’

Has taxation been successful elsewhere? The case of Mexico is quoted but there is no clear proof that the taxes caused a fairly small switch to milk and water.

The level of tax suggested will have very little effect on consumption. Repeated increases in cigarette tax had marginal effects on reducing smoking. It takes a change in societal attitude to force people to change ingrained habits.

The belief that the tax will automatically lead to a reduction in obesity and related diseases is far too simplistic in my opinion. It will take other measures including the elimination of marketing and advertising of junk foods. Above all, it will take government will to confront the food industry and to promote change in the hearts and minds of the country, and with so many lobbyists and vested interests, that’s not going to happen anytime soon.

In the meantime, dentists would be best advised to walk the talk, to limit their own intake, and step up their patient education so it’s about general and dental health, and vote for a government with a genuine commitment to health.

Whilst we applaud the government’s recognition that immediate action is needed to tackle the UK’s childhood obesity and dental caries crisis, we believe that the sugar tax should be introduced as a means to reduce dental caries and improve oral health in children, and not as an attempt to reduce obesity. Excessive sugar consumption is the single largest contributing factor to dental caries in children, but sugar alone is not the largest contributor to obesity. We believe that a sugar tax to ultimately reduce obesity will not have the desired effect, and would therefore be seen as a failure.

We think that the government’s Obesity Strategy should focus on reducing obesity and its burden on the NHS, and a separate strategy for reducing excessive sugar consumption should be introduced. A sugar tax would be an effective part of a joined-up approach to reducing sugar consumption, which should also include:

We believe that the £520 million revenue generated by the tax should be reinvested in preventive strategies to help improve the nation’s oral health, including the provision of oral health education services in schools, and to reduce the burden of children’s teeth extractions on NHS hospitals.

6hr
|
Oral Health
Dentistry Online uses cookies to give the best experience. If you continue to use our site, we will assume that you agree to the use of such cookies. Read More.
Accept