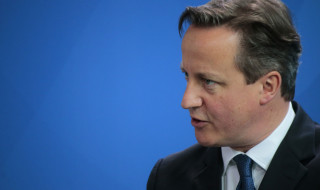 A sugar tax is on the way, David Cameron has hinted – in what appeared to be a dramatic policy U-turn.

A levy on sugary drinks – to tackle obesity, but also to curb alarming levels of dental decay in children – is now being considered, the prime minister revealed.

Just three months ago, Downing Street vowed not to bow to growing demands for a sugar tax, made by the British Dental Association and other campaigners including TV chef Jamie Oliver.

And number 10 was accused of attempting to bury a report, by Public Health England, which urged the Government to introduce a tax of between 10% and 20% on sugary foods and drinks.

But, quizzed by journalists, Mr Cameron said a sugar tax was being considered as part of a new anti-obesity strategy, to be published within weeks.

He said: ‘We do need to have a fully worked-up programme to deal with this problem and we will be making announcements later in the year.

‘Of course it would be far better if we could make progress on all these issues without having to resort to taxes.

‘That would be my intention.

‘But what matters is that we do make progress.

‘I think we need to look at this in the same way in the past we’ve looked at the dangers of smoking to health, and other health-related issues.

‘That is my commitment.

‘We need a fully worked-up strategy.

‘We shouldn’t be in the business of ruling things out.’

The comments are a dramatic shift from as recently as October, when both number 10 and the Department of Health insisted a sugar tax had been ruled out.

But ministers are believed to have been struck by growing evidence that raising the price of fizzy drinks is an effective way of discouraging unhealthy eating.

In particular, a study showing that a 10% tax on sugary drinks in Mexico was behind a 12% fall in sales has been influential.

The BDA has called for action on the high intake of ‘free sugars’ – the effectively nutrient-free refined sugar added to products such as sweetened drinks.

It linked the problem to tooth decay is the number one cause of hospital admissions among children.

Every year, 46,500 young people under 19 have teeth removed under general anaesthetic, with hospitals forced to run extra operations in the evenings and at weekends to deal with demand.

In October, a Public Health England report backed a sugar tax, warning the nation is ‘eating too much sugar’, fuelling tooth decay among children and an obesity crisis costing the NHS £5.1bn a year.

However, it also called for action on promotions in shops, cafes and takeaways, the advertising of high sugar foods and drinks and clearer definition of high-sugar foods.

As the Omicron challenge looms over the public sector and the risk of up to 25% staff absence remains prevalent,…