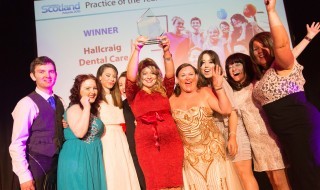 On a glamorous night in Glasgow, we announced the winners of the Dentistry Scotland Awards.

The 6 November was the biggest night in Scottish dentistry as Glasgow played host to the Dentistry Scotland Awards at the Marriott Hotel.

It was the fifth anniversary of the glitzy event and the hosts made a special effort to ensure the 300 guests that attended enjoyed the night.

The finalists that had made it through the judging stage and to the evening were treated to a drinks reception when they arrived.

The evening gathered passionate and patriotic dentists from all over Scotland to celebrate the very best in Scottish dentistry.

Bagpipes announced the start of a delicious three-course meal as the anticipation and excitement built before the ceremony awarded the winners.

Watch the video to see who were the big winners and contributors to the Dentistry Scotland Awards and find out the full list of winners by clicking here.