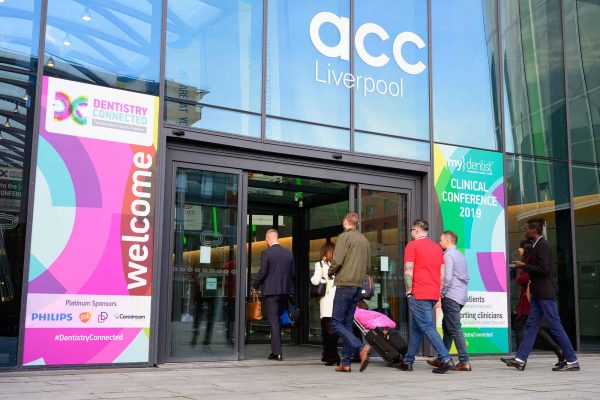 Dentistry.co.uk reports back from the Mydentist Clinical Conference, where the schedule was as lively as the discussion.

The torrential autumn rain – and all it brought with it, from flooded roads to washed out train tracks – wasn’t enough to take the shine off the Mydentist Clinical Conference.

Hundreds of the organisation’s dentists and team members flocked to the ACC in Liverpool at the start of October. Here there were two days of education, networking and no small amount of celebration.

Opening proceedings, chief executive officer (CEO) Tom Riall was effusive in his praise of the Mydentist team. He told the audience: ‘You are, perhaps without realising it, quite literally changing the face of dentistry across the UK.’

And he assured the hundreds-strong crowd that the future was bright.

‘No matter your ambitions,’ he said, ‘Mydentist is the place to realise them. Mydentist is growing faster than it has in years. And this matters – it allows us to keep investing.’

He explained how seriously the company takes its responsibility to maintaining the country’s oral health. And acknowledged the country’s progress in reducing decay rates while warning that it was a precarious achievement.

‘The number of UDAs being delivered in England is falling faster now than at any other time since the introduction of the 2006 contract,’ he said.

‘There’s a real risk that we might unpick the gains of the last 50 years if we take our eyes off the ball. Isn’t it time to put some serious money into preventive care?’

Billed as a clinical conference the lectures on offer met this promise with aplomb. The line-up of speakers and talks clearly aimed at dental professionals in primary care, focusing on the challenges they face in their daily practice.

But the two days weren’t without light relief. Events kept moving at a fair clip with the lively stewardship of Mark Jones.

The head of the Mydentist Academy brought his best TV show host impersonation to proceedings, poking fun at the lunch choices (vegetarian sausage rolls in particular coming under fire) while polling the audience and giving away prizes to widespread excitement.

His humour and energy fired up the crowd, who remained energised and engaged from the moment the conference opened through to the closing remarks made on the Saturday afternoon.

Of course, things like the deluge of balloons emptied on the audience after lunch on the Friday helped on that front, too. But even this burst of excitement and humour didn’t detract from a very grounded timetable.

A panel chaired by Steve Melton and clinical director Nyree Whitley tackled the serious issue of supporting clinicians. Barry Cockcroft weighed in on the issue of dental contracts as the talk turned to the NHS.

‘Most prevention doesn’t occur in a dental practice,’ he said. ‘We need to start targeting inequalities more effectively. Commissioning is designed to be used flexibly but it’s actually being used very rigidly. The improvement in oral health over the years actually masks significant inequalities throughout the population.’ Elsewhere, the line-up offered an in-depth discussion from rising star Affan Saghir. His open approach to social media has propelled the success of his minimally invasive aesthetic treatments.

His talk, ‘The modern era of smile makeovers’, gave as much clinical information as it did hints and tips on educating patients through responsible social media use and involving the whole team in treatment.

This honest approach earned him rapturous applause. Before he concluded: ‘We can help each other by the power of social media. What patients want is not what we want. They just want to see simple smile makeovers, so we need to start offering them.

‘We need to treat our team with respect, care and dignity too. If you care for your team, they will care for you back – and that’s really why I’ve done so well.’

Not to be outdone, the range of breakout sessions the following day covered some impressive ground. From Barry Oulton discussing comfortable dental injection techniques, to a talk on achieving sustainability in dental practice from Amanda Sheehan and Elaine Tilling.

Everything from orthodontics to implant dentistry got a look in as the audience split up for smaller, more specialised sessions hosted by well over 20 speakers.

Despite the festivities of the previous night – namely, the Mydentist Gala Dinner and Excellence Awards – the audience were bright-eyed and bushy tailed as the day wore on.

If proof were needed Mydentist is embracing its brand as a more open, enagaged organisation, it was there to be seen in the make-up of the audience. For the first time in the conference’s history, the doors were opened up beyond Mydentist’s own practices. Any interested clinician was also invited to attend.

With many of the sessions being streamed live to the Mydentist Facebook page, the conference was open to all, and more accessible than ever before. The Mydentist Clinical Conference will return in 2020 – and the bar has been set high.