Has the GDC lost the confidence of the profession? 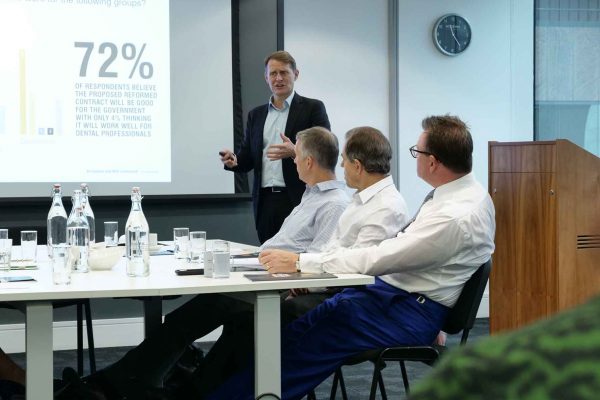 Has the GDC lost the confidence of the profession?

Looking at the results of the Dentistry Confidence Monitor, a panel got together to talk about the dental regulator, the General Dental Council. Seb Evans reports.

That’s according to the latest results from Practice Plan’s Dentistry Confidence Monitor. The monitor asked dentists their thoughts on key issues affecting the UK dental profession.

This year, the monitor received 420 responses from dentists from different backgrounds across the UK. In light of the monitor, a panel made up of Eddie Crouch, Simon Thackeray, Chris Groombridge, Duncan Thomas, Rory O’Connor, Bethany Rushworth and Nigel Jones met earlier this year to discuss the Dentistry Confidence Monitor and give their thoughts on what needs to change.

During the discussion, and in the Dentistry Confidence Monitor, the GDC received a lot of attention.

One anonymous respondent to the monitor said: ‘The GDC has completely lost the confidence of the whole profession over the last 10 years. Over regulating, ridiculously expensive and with no understanding of the real challenges faced by hardworking dentists on a day-to-day basis.’

Nigel Jones kicked off the panel discussion surrounding the GDC. He asked whether the perception of the GDC is making things worse.

Bethany Rushworth pointed out that this perception is engrained from your first day in university. ‘You’re given the GDC Standards from day one and told you must abide by them,’ she pointed out. ‘Any deviation from those standards, and “your career is over”. After working so hard to get there, you don’t want to take a wrong step.

‘Instead of it being actual risk, we have this perceived risk, which is maybe out of proportion. We receive all these talks about ways to protect yourself. They’re obviously there to try and help you. But it’s not a very balanced argument.

‘We leave university scared of failing with maybe an irrational perception of the risks of being a dentist.’

But Chris Groombridge argued that the GDC’s authority should within reason, be something dentists respect. It’s that authority that allows dentists to practise within the remit of reasonable standards.

‘It should be like the police. You don’t need to fear the police if you haven’t done anything wrong,’ he explained.

The main remit of the GDC is to protect the public. But only 24% of NHS dentists and 25% of private dentists are confident or very confident it is fulfilling this role, the monitor shows. Part of the reason is down to many dentists feeling the regulator is just punishing them, rather than making sure they’re practising safe dentistry.

‘The GDC is not there to punish, it’s there to protect the patient,’ Simon Thackeray said. ‘Punishments shouldn’t be punitive. But the GDC says in some of its own rulings: “We understand this may seem punitive”. If you ask the profession whether the GDC is there to punish I think 99% will say it is. It’s punitive.’

Rory O’Connor explained one of the most challenging components of a GDC case can be how long it takes to go through.

‘From beginning to end, I don’t think saying we’ll get it done in 18 months is good enough,’ he said. ‘The dentist may or may not be able to practise in that time. And, if they can practise, they’ve got a sword of Damocles hanging over them until resolved.’

He is calling for major changes in the way the GDC manages the complaints procedure.

The panel agreed things have, in recent months, slowly started to change for the better. In fact, since the launch of this monitor, the GDC has reduced its annual retention fees for dental professionals. But, to improve the situation further and with immediate effect, Eddie Crouch suggests the GDC goes through the case pipeline and judges each case based on the regulator’s changing criteria to see if it’s suitable for a fitness to practise case.

He said: ‘I said this right at the outset. You need to have a look at all those cases in the pipeline and judge them based on the new criteria today. They resisted that for quite a while. A lot of cases were still going through that were not fitness to practise cases. Consequently it could save them huge amounts of workload. It’s putting the right people in front of the dock. Rather than having an 18-month wait to have the wrong person there.’

Probably most worryingly is that 86% of NHS dentists are anxious or very anxious over their ability to meet GDC standards. This compares to 48% of private dentists.

Simon points out: ‘This has to be down to the NHS system and the time constraints, plus the huge opportunities for patients and dentists to misunderstand what is actually available on the NHS.

‘The GDC certainly has a lot to answer for – and, despite it improving slowly in some respects, it is still at least partially responsible for a culture of fear in dentistry.’

Simon thinks a lot of it comes down to a blame culture in dentistry. He highlighted the aircraft industry as a positive example, showing how it encourages complaints and people aren’t criticised for wrongdoing or highlighting problems.

Chris also pointed out: ‘The blame culture we currently operate in versus the learning culture that the airlines have and is highly successful, is actually the culture we should be adopting in the NHS, not just dentistry, but across the whole of healthcare. We would be working in such a different environment. That would really change the culture.’

Rory concluded that professional bodies, such as the British Dental Association, and people of influence need to have positive relations with the GDC to create the change needed.