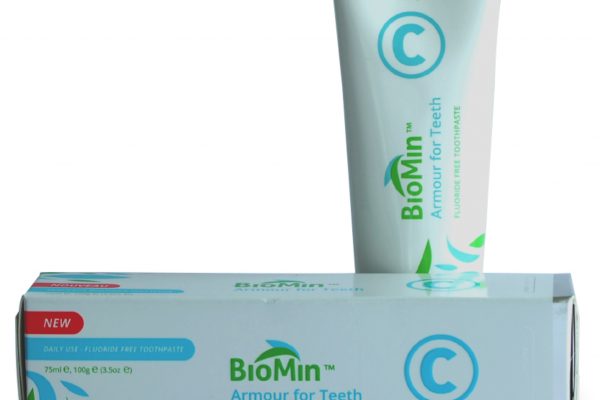 The bioactive glass in Biomin C contains calcium and phosphate ions within its structure. After brushing, the fine glass particles adhere to the tooth surfaces. Saliva will slowly dissolve these particles, allowing the ions to precipitate together as hydroxyapatite on the tooth surfaces and into the dentine tubules. This process helps to restore the early stages of tooth enamel decay. Studies in artificial saliva have shown that this process is extremely rapid, beginning within five minutes of application and continuing over several hours.

In addition to restoring lost tooth enamel, Biomin C may help to reduce tooth hypersensitivity, a condition estimated to affect nearly a third of all adults, or 14 million people in the UK alone. The tiny particles of Biomin C are able to enter the open dentinal tubules, where they form hydroxyapatite to seal them. Researchers in the UK and China have demonstrated that Biomin C provides effective dentine tubule occlusion and a high reduction in dentine tubule fluid flow, believed to be the major cause of dentine hypersensitivity.

Biomin C has been developed at the Dental Institute, Queen Mary University of London (QMUL) by Professor Robert Hill and his team, who launched the first Biomin product, Biomin F, last year. The bioactive glass in Biomin F dissolves gradually to release fluoride, phosphate and calcium ions, forming the re-mineralising compound fluorapatite on the tooth surface; now with the launch of Biomin C an effective fluoride-free alternative is available, which offers a choice for those who prefer not to have fluoride in their toothpaste. It is also designed for those parts of the world, particularly areas of India and China, where high levels of fluoride are naturally present in the water supply.

‘As it dissolves, the glass structure provides a slow release vehicle for calcium and phosphate together, enabling it to form hydroxyapatite, which aids effective re-mineralisation,’ explained Professor Hill, chair of physical sciences at QMUL and chief scientific officer at Biomin Technologies. The challenge for scientists has been to develop a fluoride-free toothpaste that is an effective alternative to Biomin F. Trials by Professor Hill and collaborators have shown that Biomin C is second only to Biomin F in terms of its re-mineralisation rates, superior to other competing products.

Richard Whatley, CEO of Biomin Technologies, is optimistic about the uptake of Biomin C. ‘We anticipate it will build on the success of Biomin F, which has achieved very high levels of user satisfaction,’ he said. ‘Over 65% of Biomin F evaluators suffering from tooth sensitivity, even after using other “sensitivity toothpastes”, reported a significant reduction in symptoms, and 15% claimed to be symptom-free after two weeks of use. There is considerable debate about the inclusion of fluoride in toothpaste and we have received many enquiries from the general public for a fluoride-free product that may also provide a high level of protection and help combat sensitivity.’

For more information on Biomin F and Biomin C, go to the Biomin Technologies website www.biomin.co.uk. This also provides a list of the products available to both the profession and the public.