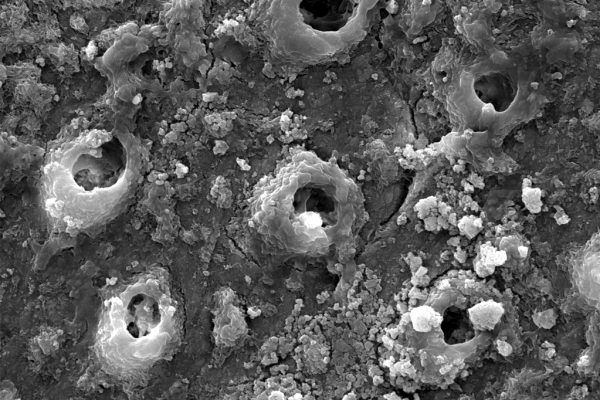 Moira Crawford speaks to Professor Robert Hill and asks how less fluoride can actually be more.

Fluoride has long been seen as the ‘magic bullet’ in dental protection. Since its effect in reducing tooth decay has been recognised, patients have widely been advised to use a toothpaste containing fluoride on a daily basis. It has also generally been accepted that the higher the level of fluoride, the more effective the toothpaste at remineralising damaged tooth enamel, so while most regular UK toothpastes contain fluoride at around 1,450 parts per million (ppm), prescription toothpastes can contain fluoride in concentrations of up to 5,000ppm.

Fluoride treatments and varnishes are applied to the teeth of children at risk of caries, and in several regions of the UK fluoride has been added to the water supply to improve the dental health of local people.

There’s no doubt that the introduction of fluoride has had a beneficial effect on the rates of decay, especially among children from deprived backgrounds, but it may be time to reassess the levels of fluoride that are given. Too much fluoride, caused either by fluoride treatment or children ingesting toothpaste, can cause fluorosis. In some parts of the world there is a strong anti-fluoride lobby, and here in the UK scientists are now arguing that high concentrations of fluoride alone are actually not the best strategy.

Professor Robert Hill, research director at the Dental Institute and head of dental physical sciences at Queen Mary University of London, has been researching this area for some years, and is convinced that applying ever higher concentrations of fluoride to the teeth does not have the benefit that has previously been believed. ‘Simply increasing the amount of fluoride within the toothpaste is frankly a crude solution,’ he argues. ‘Much of the additional soluble fluoride just goes to waste.’

Professor Hill and his team have been working on bioactive glasses, initially developed for bone grafting, and have developed a toothpaste that contains a bioactive glass that delivers a combination of calcium, phosphate and fluoride ions to promote effective remineralisation of tooth enamel through the production of fluorapatite, the fluoride analogue of natural tooth mineral. Because the fluoride in Biomin F is incorporated within the structure of the glass, it is delivered gradually as the glass dissolves, and therefore a lower concentration (approximately equivalent to 500ppm) is required, yet is actually more effective.

The problem with fluoride toothpaste

Professor Hill’s experiments have demonstrated that when conventional fluoride toothpaste containing a soluble fluoride such as sodium fluoride or sodium monofluorophosphate is used, there is an immediate ‘high’ of fluoride in the mouth, but that this drops rapidly as the toothpaste is washed away by salivary flow, so that after around only 100 minutes the amount of fluoride that remains is below therapeutic levels (Figure 1). Even at high concentrations, the fluoride is rapidly washed away, so the effect is only short term. Fluoride varnish, too, is only effective for a few days.

A further drawback is that high concentrations of fluoride form calcium fluoride (also known as fluorite) instead of fluorapatite, which is what is required for effective remineralisation. In large quantities fluorite can form a whitish crust on the tooth surface, which was previously thought to act as a reservoir of fluoride, but Professor Hill’s research has shown that this is not the case. ‘It is completely insoluble, and does not release fluoride at all,’ he explains. By contrast, the fluoride contained within the glass structure of Biomin F is released slowly over around 12 hours and is therefore used more effectively. ‘As it dissolves, the glass structure in Biomin F provides a slow release vehicle for the fluoride, calcium and phosphate together, enabling it to form fluorapatite, which is more stable and resistant to acid conditions,’ he says.

How fluoride works in Biomin F

Biomin F has been developed to address three key problems in dental health: hypersensitivity, caries and dental erosion, caused by loss of tooth enamel or demineralisation. Under normal conditions, the hydroxyapatite mineral in tooth enamel is in dynamic equilibrium with the calcium, phosphate and hydroxyl ions in saliva, but under acidic conditions, such as following an acidic drink, this equilibrium is shifted, the pH in the mouth falls and demineralisation can occur.

As the bioactive glass in Biomin F gradually dissolves, releasing phosphate, calcium and fluoride ions, these work in concert with the saliva to restore the equilibrium. Even more clever, at a lower pH the glass dissolves faster, so that the effect kicks in more rapidly.

Professor Hill summarises: ‘This smart response means that if the user consumes an acidic drink, Biomin F dissolves faster to protect the teeth against acid dissolution.’

Prior to the launch of Biomin F, bioactive glasses had already been introduced into the dental arena. These conventional bioactive glasses (eg, Novamin) form hydroxyapatite material in the mouth, but this is less stable and less resistant to acid than fluorapatite. The difference with Biomin F is that fluoride has been incorporated within the structure of the glass itself and, to aid and speed remineralisation, the phosphate content has been significantly increased.

Professor Hill’s labs at Queen Mary University of London use state-of-the-art equipment for analysis and have tested and timed the action of Biomin F both in buffer solution, containing no calcium or phosphate ions, and in artificial saliva (AS). The effects were impressive. In buffer, the glass converts to fluorapatite in around six hours, but in artificial saliva this starts occurring in under an hour after brushing, as shown by X-ray diffraction.

The structure of hydroxyapatite and fluorapatite is very similar, and cannot be distinguished using conventional techniques but, according to Professor Hill, Queen Mary has a dedicated probe for its NMR spectrometer, allowing the team to measure fluorine and study how it converts to fluorapatite – important because of its increased stability and acid resistance. Here too it was possible to see that the fluoride is converted to fluorapatite in around six hours in buffer and under 45 minutes in AS. Biomin F continues to remineralise tooth enamel for approximately 12 hours but some effects are still continuing at 24 hours after brushing.

In order for the glass to dissolve slowly where it’s needed, the toothpaste has to stay on the teeth. The polymer used in Biomin F increases the viscosity of the toothpaste, but also chemically bonds to both the calcium in the tooth enamel and the calcium in the Biomin F, so that it sticks to the tooth surface and remains in place to release the fluoride, calcium and phosphate ions for several hours (Figure 2). As the glass particle size is very small, these particles are able to enter the dentinal tubules and work to occlude these (Figures 3a and 3b). Fluorapatite forms preferentially on the apatite rich walls of the peritubular dentine within the tubules (Figure 4) gradually occluding them, an effect still visible after acid challenge (Figures 5a and 5b). Professor Hill and his research team believe that fluorapatite crystals probably favour growing on the existing apatite-rich walls of the dentinal tubules, which have a higher mineral content.

As the fluorapatite occludes the dentinal tubules, it reduces the flow of fluid through them, known as hydraulic conductance, which is the cause of sensitivity. Studies in the Queen Mary labs have shown that the fluorapatite formed by the dissolution of the glass in Biomin F is more resistant to acid challenge than hydroxycarbonated apatite formed from soluble fluoride in conventional toothpastes, and so the tubules remain occluded more completely. The hydraulic conductance shows a greater percentage reduction as well as faster remineralisation rates than other toothpastes tested, says Professor Hill (Figure 6).

Professor Hill and his research team’s work in developing Biomin F has shown clearly that it is not quantity of fluoride that improves its efficacy, but quality – the way that it is delivered.

Incorporating fluoride within the structure of the bioactive glass, combining it with phosphate and calcium ions to enable quicker production of stable, acid-resistant fluorapatite, and adhering the product to the teeth so that it can dissolve slowly where it can deposit fluorapatite most effectively, is the key to its effectiveness.

Biomin F is a smart toothpaste, using new technology to deliver efficient remineralisation at levels of fluoride far lower than conventional toothpastes. It seems that in this case, less fluoride really can be more!

Cancer patients have many challenges to contend with, and they may view oral health as a low priority, says dental…