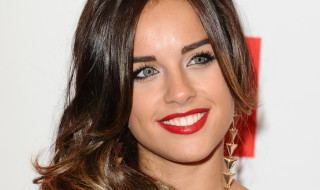 Actress Georgia-May Foote, a finalist in the 2015 series of Strictly Come Dancing, has embarked on Invisalign treatment.

The former Coronation Street actress is undergoing the treatment to correct the alignment of her teeth.

The treatment coincides with Georgia’s upcoming role as Holly Golightly in the stage version of Breakfast at Tiffany’s.

Georgia-May made the announcement of her starring role in Breakfast at Tiffany’s to her 312,000 Twitter followers.

The role will require the 25-year-old actress to sing and act with her aligners in place.

She is also using the social media platform to keep followers up to date with her treatment progress.

‘That first night sleep in the next @invisalign_uk shield is a killer! But cant believe the difference already! #straightteeth’, she tweeted.

The Invisalign system follows the same biomechanical principles as traditional orthodontics, but achieves tooth straightening using virtually invisible, flexible, aligners that are removable but worn for 22 hours a day and are only taken out for eating and drinking.

The aligners do not affect the patient’s ability to speak – or sing – in public.

Georgia takes to the stage as the lead in Breakfast at Tiffany’s from 19 September, when the production tours the UK.