Brexit will not get in the way of NHS dentistry 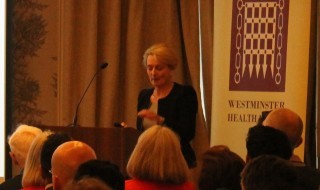 Brexit will not get in the way of NHS dentistry

Sara Hurley has said that a Brexit will not get in the way of NHS dentistry going forward.

Speaking at the Westminster Health Forum yesterday, Sara pointed out that patient conditions will be the same whether Britain is inside or outside Europe and so it does not change her plans, she also pointed out that there may be another 5 million people in the country by 2030 with or without a Brexit, pointing out that ‘people are still going to come from overseas, even if they don’t come from Europe.’

‘Does it matter?’ Sara Hurley, CDO for England, questioned.

‘Should we just stop today?

‘No, we’ve got to keep going because our patients matter and oral health matters.

‘Therefore I do not see Brexit getting in the way going forward.

‘But frankly there is so much disarray going on in government at the moment, I’ve got my vision for the future, and we’re fixed on improving oral health with your assistance.’

She pointed out that it is the finance directors in the 13 regions of NHS England that dictate how NHS dentistry is commissioned in that area and it is these directors that need to see the evidence showing where access is lacking.

‘We have dentists telling us that they have waiting lists of children waiting to be seen, but they’ve got no more UDAs,’ Sara said.

‘Meanwhile there’s a practice two towns away with UDAs to spare, there’s no flexibility.

The decisions on financing are taken by the local commissioning.

‘There is no national bag of money.

‘It’s delegated down and that’s not a bad thing.

‘But of course these commissioners and finance directors will only respond to the evidence.

‘And maybe that’s why we need to be working more collaboratively.’