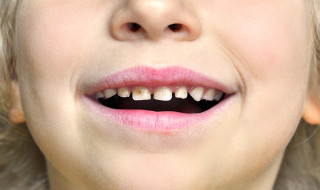 The number of five-year-olds with tooth decay has dropped to its lowest level since 2008, according to Public Health England.

‘However, one child with tooth decay is one too many and there is still much inequality in dental health around the country.

‘Tooth decay is painful and too often results in teeth extraction, some under general anaesthetic.

‘This is further evidence that we can stop tooth decay in its tracks.

‘Limiting sugary food and drink, supporting children to brush their teeth twice a day with fluoride toothpaste and regular trips to the dentist will help prevent a great many more children suffering at the hands of tooth decay.’

It also highlights large regional variations, with 33.4% of five-year-olds in the north west suffering from tooth decay compared with 20.1% in the south east.

‘The regional differences need to be tackled,’ Claire Stevens, media spokesperson for the British Society of Paediatric Dentistry, said.

‘How unfair that if you are born and brought up in the north west you have a much higher chance of experiencing dental decay than in the south east.

‘In Manchester, where I work, 66.6% of children in the survey had no visually obvious decay experience compared with 79.9% in the south east.’

For the first time, data has also been collected across the survey on ethnicity in dental health.

‘The further increase in the proportion of young children free of tooth decay is great news, but the fact remains that a quarter of 5-year-olds have an almost entirely preventable disease – and a quarter of these are not even receiving treatment,’ FGDP(UK) dean, Dr Mick Horton said.

‘We need to better educate parents and children in how to improve their diet and look after their teeth.

‘There are so many places we could be doing this – through GP surgeries, nurseries and schools, to name but a few – but these opportunities are routinely missed.

‘To avoid decades more of filling and extracting young children’s teeth, the government must forge a joined-up approach focused on prevention of tooth decay as well as treating disease.’