Why aren’t we talking about gum disease more? 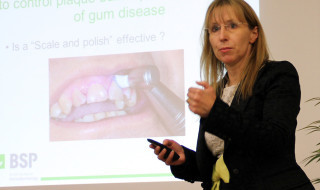 Why aren’t we talking about gum disease more?

Living with gum disease is not easy. Its prevalance remains high and it can affect patients’ overall health, leading to poor self-esteem, mastication and, eventually, even tooth loss.

Peri-implantitis is also an emerging public health issue, with a high burden placed not only on the health consequences of an individual, but on social and economic factors too. And yet despite all this, gum disease is relatively simple to treat – especially if it is caught before it causes much damage to a person’s overall health.

First screened at Europerio8, the British Society of Periodontology (BSP) recently tackled this issue with the British Society for Dental Hygiene and Therapy in a short documentary called The Sound of Periodontitis. With support from the European Federation of Periodontology, the film follows four patients’ experience of periodontitis, describing how the disease has affected their life before and after diagnosis and treatment. The film aims to use these fresh perspectives to improve communication with patients, and to promote the prioritisation of periodontal health in Europe.

In the film, one patient describes the ‘burning sensation’ in her gums and her reluctance, at first, to do anything about it, adding: ‘I wasn’t speaking up as much as I would have done with a cancer condition.’

So the question is: why aren’t people talking about gum disease, and what can we do about it?

I recently joined the BSP in London for an update on new perio prevention guidelines published in a consensus report last year. Here is what I found out.

In November 2014, a group of dental health professionals gathered together for a workshop in Segovia, near Madrid, for the 11th European Workshop on Prevention of Periodontitis and Peri-Implantitis.

The workshop called for renewed emphasis on the prevention of periodontitis and peri-implantitis, urging participants to recognise the need for individually tailored prevention through diagnosis and risk profiling.

The four groups in total, each with a remit and a group leader, were tasked to research, discuss and verify systemic reviews and, after a few days, produce a consensus report.

Rechargeable power toothbrushes were found to provide greater plaque removal, but there was insufficient evidence to recommend one brush head design over another

The second group focused on self-performing methods of prevention such as plaque control, interdental brushes and flossing. It was found that flossing cannot be recommended due to a lack of evidence, and expert opinion showed only to use at healthy sites where interdental brushes won’t fit.

Rechargeable power toothbrushes were found to provide greater plaque removal, but there was insufficient evidence to recommend one brush head design over another. Mouthwashes were found to be the chemical agents with the most adjunctive benefit but they require additional patient compliance.

Group three looked at managing peri-implant mucositis and found that bleeding on probing was a key clinical measure for determining the periodontal health of a patient. A lack of supportive periodontal therapy in patients with mucositis was associated with a greater incidence of peri-implantitis. Plaque, smoking and excess cement were considered risk factors for mucositis. Ultimately, professional oral health management and debridement will lower inflammation.

The final group considered the effect of professional tooth cleaning to control plaque build-up and recurrence of gum disease. The findings concluded that scale and polish treatment was effective if included as part of supportive therapy and while encouraging patients to comply long-term. ‘Motivate, educate’ was a key message.

While preventable, periodontitis affects 50% of the population

The group then looked at whether toothbrushing causes gum recession and tooth wear. They found that while there was no direct evidence, the reasons were multifactorial and included local factors such as gum thickness, crowding, braces and anatomical features. Stannous fluoride, arginine, strontium, calcium sodium and phosphosilicate toothpastes were found to work best with sensitive teeth. The message is to ‘diagnose, educate, prevent and treat’.

Ultimately, each group decided that educating patients on the correct oral hygiene instruction was key to promoting good oral health and preventing periodontal and peri-implant diseases. The workshop provided specific recommendations for individuals, the oral health team and the public health officials.

Professor Nicola West from the University of Bristol, who was also part of the workshop, believes they proved ‘dynamic’ and provided insight into key areas of primary and secondary prevention.

‘Periodontitis affects 50% of the population and I think our role in promoting these diseases is to show that, in the main, they are preventable and they affect our wellbeing and overall health,’ she states.

‘I think campaigns, education and videos like The Sound of Periodontitis are going to help change attitudes.’

Speaking to Professor Iain Chapple, outgoing president of the BSP, after his presentation for his workshop group, he admits that he is often dismayed at the lack of information surrounding periodontal diseases for the public, adding: ‘The sad thing is, it’s not actually that difficult to treat. It’s not that expensive and it has a positive impact on other conditions too, such as mental health. But it’s patients who have to make that decision to change and some find it very hard.’

Taking over from Professor Chapple as president this year, Dr Philip Ower agrees that the public should be better educated on the impact gum disease can have on quality of life. ‘This press conference highlighted two major initiatives that the BSP has been heavily involved with over recent months,’ he states.

’The first is a summary of the 11th European Workshop on periodontology, which has major implications for general dental practitioners, and the second is to raise awareness of The Sound of Periodontitis, a short documentary film describing the effects of periodontitis on patients, in their own words. This is groundbreaking and enlightening and should be viewed by all clinicians, whatever their work environment, and certainly by patients who have been diagnosed with periodontitis.’

The BSP is keen to spread the word of the documentary and hopes it will provide a fresh perspective on a disease that has been never silent.

To direct viewers to The Sound of Periodontitis, visit www.efp.org/public and help spread the word through social media, websites and viewings in your practice.