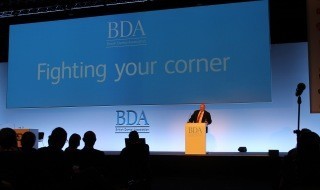 Kevin Lewis reviews how the recent BDA Conference went and how he thinks it might have brought the profession together.

I start to pen this column in the certain knowledge that I will already have alienated many of those reading it, and no doubt gravely irritated some others.

What could be more natural than the fact that as a six-year-old child, born in Middlesex and attending a school in Buckinghamshire where rugby was the main preoccupation, I should be drawn to supporting the above mentioned football team? It was almost inevitable, given that my best mate at that time, born in Surrey and whose parents were from Hertfordshire, was a rabid red. Even if my geographical credentials were somewhat tenuous for such early loyalties, my spiritual allegiance was never in doubt, even then.

I have just returned from attending the BDA Conference in Manchester. I appreciate that the British Dental Association (BDA) is not everybody’s cup of tea, and it has also been through a bit of a rocky patch – the same might be said for Manchester United (in both respects). But I would like to think that both are nicely on the mend and set fair for better times ahead.

The UK dental profession needs a strong, vocal and stable BDA, and a troubled BDA is often a reflection of a troubled and disjointed profession. Across society people don’t ‘join’ things like they used to. The challenge for the BDA has, for some years now, been that of rediscovering itself and demonstrating its role and relevance in a radically altered professional and social environment. In the early years of my dental career the BDA was almost synonymous with NHS dentistry. In those days the BDA was also synonymous with postgraduate education and the local BDA section was the primary feeding station and watering hole around which local dental colleagues would gather.

Over the years the UK itself has become progressively less united and the profession more diverse in all senses of the world. The body of UK dentistry has fragmented along geographical and regional boundaries, along NHS/private rift lines and in many other ways. And yet the BDA has needed to try to be all things to all people, universally relevant and meaningful.

Recognising that a ‘one size fits all’ approach was no longer sensible, the BDA pursued choice and a personally tailored service, and while the ideas seemed right enough, the predictions of how those choices would be exercised clearly weren’t and the applecart was temporarily upturned. The response was swift, smart and apparently successful, and things are turning around.

Am I bovvered though?

Some strong themes emerged from the BDA Conference and they were hammered home by the president, Nairn Wilson, by Mick Armstrong the chair of the principal executive committee, by Peter Ward the chief executive of the BDA and by others. One such theme was engagement, involvement, and participation. As the profession has become so much larger, it should have become so much stronger. Amongst the possible explanations for the fact that this is not so, are the divisions mentioned before and the fact that each group wants different things.

Mick Armstrong’s point is that you can’t expect everyone else to do all the work in the hope and expectation that you will wake up one morning with everything fixed. There seems to be a disconnect in the eyes of many between one’s own fortunes, the fortunes of the profession and the fortunes of the BDA. If the BDA is strong, well supported and effective it helps to deliver the other two, but not everybody understands that. Being – or claiming to be – ‘unbovvered’ about the welfare of the BDA is not unlike being unbovvered about the outcome of the general election.

As we all know, we are all affected by the outcome of an election one way or the other, and like it or not, the same applies to the impact of the BDA, however much some might like to believe otherwise.

One consistent and deafening clarion call, and a flag around which the profession is being urged to rally, is the future of the regulation of the dental profession. Staying on my electoral theme, the General Dental Council (GDC) has over the past five years experienced the same kind of reversal as the Liberal Democrats.

One looks like a mobile field hospital with casualties scattered from the far north of Scotland right down to Cornwall, while the other gives the disarming external appearance of business as usual – although in fairness to the GDC, change is already starting to happen. The harshest analysis of the scale of the Lib Dem ‘missing in action’ list is that two London cabs can now transport the entire ranks of the surviving Lib Dem parliamentary representatives up to Westminster.  A third London cab would comfortably transport all of the UKIP, Green and Plaid Cymru MPs combined, but whether they could agree on the driver, the type of fuel or the destination is anybody’s guess. It is equally true that a single London cab would be more than sufficient to transport all of the dentists who sit on the GDC to and from council meetings in Wimpole Street – and suddenly the analogy is no longer funny.

In typically uncompromising fashion, one former GDC president suggested that the GDC had not only lost the trust and confidence of the profession, it has also lost its way. This former GDC president is none other than the incoming BDA president, Nairn Wilson, and he is clearly on a mission.

It would be too simplistic to suggest that the BDA has the knives out for the GDC because of the mutual bad blood over the annual retention fee legal challenge. The BDA and the GDC are miles apart, not least because one understands dentistry, dentists and the work they do and passionately cares about their welfare, while the other believes that dentists need to be kept at arm’s length. Knowing too much about dentistry and getting too involved makes the relationship too cosy and actually gets in the way of effective regulation. That is the prevailing theory anyway.

The FGDP has also showed excellent leadership in making clear its irritation at having its published standards regularly hijacked and misinterpreted by hired gun ‘experts’ and third parties.

I came away from Manchester with the feeling a corner had been turned in the profession’s determination to put a stop to all the recent nonsense and regain control over its own destiny. I sensed that the profession is tired of being the whipping boy and is no longer prepared to suffer the consequences of misinformation, incompetence and an alarming gap between the confidence members of the public place in the profession, and the disdain and suspicion the profession can appear to be viewed by its regulator.

So the dental profession was, at least in Manchester, united. And that is great news.