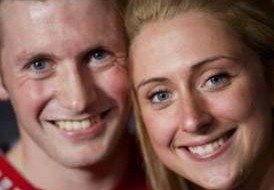 Invisalign treatment is rapidly growing in popularity across the UK. The clear aligner offered by Invisalign means patients can have orthodontic treatment, without any wire braces on their teeth. Results with Invisalign treatment have been rapidly improving too and many professionals struggle to tell the difference between traditional braces and Invisalign results.

Why have you chosen to have your teeth straightened?

JK: For me it’s a confidence thing, and nipping it in the bud. I can see my teeth moving further and further astray. Obviously we get a lot of pictures taken, and I can kind of see it has slipped away over the years. So I’d like to get that back to how it was at least, and hopefully have a nice smile to look back on.

LT: Same for me as well really. I think back to the Olympic photos and they always tell you to bite your medal, the picture couldn’t be any closer, could it? Like Jason said, it’s a confidence thing. Having a nice smile goes a long way and you just feel your teeth could look a lot better in photos, so you don’t mind smiling for them.

People are constantly sending us photos. If you have photos with young kids and fans, they send you photos saying: ‘Oh I met you today’, and you click on the photo and immediately see your teeth.

What made you choose Invisalign over other orthodontic treatment?

LT: Well I’ve actually had fixed braces, when I was a kid I had them. The fixed braces are really painful and you can see them, you’ve got a whole rack of metal in your mouth. Invisalign is completely see-through and completely clear. It just makes you look like you’ve got shiny teeth.

The other good thing I like about it is you get your moulds taken, they get sent away, and you get to see on the computer what your final results are going to be like. We were taken through a video, which took us through each step and we could see the finished outcome. I think that goes a long way. With fixed braces, obviously you realise you’re going to have straight teeth at the end of it, but you don’t actually get an image of what it might look like, but with Invisalign you do.

You also create an opinion on the results, so if you think: ‘No I don’t want it that way’ or ‘It looks too square’ or whatever, then you can say that and the dentist can change it. You can pretty much change your teeth to how you like it.

JK: Yeah it’s the same reasons for me really. We went for a consultation and Invisalign was recommended to us as the best, something we can wear when we are training as well. It’s not ideal having a mouth full of metal when we’re going into races. It can affect your training when you’ve got something in your mouth or rubbing a little bit.

LT: Plus, we practice starts quite a bit, and you tend to bite down pretty hard, and with the metal braces the wire used to ping off.

JK: For me I’d rather have a bit of plastic in my mouth than a bit of metal. And the fact that it’s invisible is a big thing; it’s not going to show up in any pictures.

How long is your course of treatment?

JK: It all depends what you need.

LT: I think I’m looking at around six – eight months.

JK: Mine was over a year I think.

What made you choose to have it done now? Did you want to get it done in time for the Olympics?

JK: Yeah, pretty much. It would be nice to get it done, with a few months clear up to the Olympics.

What happens once the Invisalign treatment comes to an end?

JK: I think we have something to wear every night, then it goes to every other night.

LT: You can have something put in afterwards. There are loads of options for afterwards to keep our teeth straight.

How has the treatment been so far?

LT: Yeah fine. We had the moulds taken; some of them take quite a while to set. But it’s no problem. You just sit there and nod when you get asked questions.

What’s next in the process?

LT: Our moulds get sent off, that’s the next stage. And that’s when we see what they’re going to look like after treatment, obviously our orthodontist will check it and send it to us.

Do you need to have a lot of interaction with the orthodontist?

LT: He said that he sends the Clincheck to and from the lab; he can send it back two or three times until he gets what he wants to see. So it all depends when it comes back right.

How has the treatment fit in around your training?

JK: Well we’ve only had the moulds taken so we’ve only been to see the dentist a couple of times. But it’s on the way in to training anyway so it’s not too bad.

LT: We get a rest day once a week anyway, perfect timing for things like that.

How is training going for the Commonwealth Games?

JK: Yeah, well for me. I think there’s been some good points in training, we’ve started to see all the hard work paying off, we’re seeing some good numbers in training.

Hopefully that will translate into speed soon and we’ll put on a good show in Glasgow and win some medals.

LT: Yeah the same. We had the British Nationals last week, which went really well. And now I’m back on the track, which is always nice, the track is where my heart lies.

We’ve been getting stuck in just this last week and its been going well so far.

What are you hoping for at the Commonwealth Games?

LT: You always have to say gold, there’s no point in aiming for anything else.

JK: Every time you get on the bike you just want to win, whatever race it is. When people ask is it serious, or is there a time when it doesn’t really matter, I say I want to win everything.

LT: A race is a race. We’ll come down here and do some tracks and still want to win.

Laura went on to win a gold medal at the Commonwealth Games whilst Jason won a silver medal.

After talking to Jason and Laura we also caught up with their dentist, Dr Bilal Bhatti, to find out his thoughts on the Invisalign treatment.

Why did you offer the Invisalign treatment?

Even though other braces are clear, you’ve got wires on, the brackets, they’re still visible. They’re less conspicuous than a metal brace. But Invisalign’s better than that. Invisalign has put a lot of development and research into its aligners and the way that they work, the aligners can do a lot more movements and achieve the goals that we’re looking for.

When I saw these guys, there was no problem. Jason’s treatment was a little bit harder, which we discussed. But there are no issues; you can get to that result that you want. I think it’s great for people in the public eye, on the TV, or in the papers all the time.

Is Invisalign a treatment you would recommend to other athletes?

BB: I’ve got a couple of patients who were playing at Wimbledon. One of the guys has just started his aligner treatment. It just means they can have a photo shoot and people don’t know they’ve got the aligners on.

The other thing, if it’s really bothering you too much, you could just take it out for that short space of time, when you’ve got that sporting activity.

Fixed braces can rub against your lips and your cheeks, there’s no question, Invisalign is far easier to wear and have on. I’ve had both, Invisalign and a fixed brace; I’ve put myself through both. I think it’s a choice really. The good thing about Invisalign now, is that you can get really excellent results with it. And that’s the big thing for me as an orthodontist.

Is there anywhere Invisalign can improve?

For more information about the Invisalign treatment please visit www.invisalign.co.uk.

6hr
|
Orthodontics
Dentistry Online uses cookies to give the best experience. If you continue to use our site, we will assume that you agree to the use of such cookies. Read More.
Accept