Why aggressive veneer preparations must end

Why aggressive veneer preparations must end

Crooked teeth… Cosmetic and restorative dentists have all been there. Our patients want a dramatic outcome quickly. When their teeth are chipped, worn and there are previous restorations… fine, no problem. Porcelain-etched restorations were made for these situations. But the teeth are crowded. In fact, there is not a lot wrong with them other than them being crowded and discoloured. What are the

If you are one of the many dentists in the UK who have taken a US veneer weekend course, you may well be in the frame of mind that porcelain veneers are the best solution. You will have been taught to remove all obstacles to ‘closing the deal’ and will understand that a patient’s decision to undertake this, sometimes, elective treatment is an emotive decision.

As a result, large amounts of tooth are sacrificed to create beautiful aesthetics and correct emergence profiles. Much of this is done under the banner of ‘minimal prep design’.

In crowded teeth, this is impossible. The preparations are categorically not minimal. Let us please be honest to our patients and ourselves. It means showing patients photos of aggressive preps where aggressive preps are needed but also, we should certainly be giving them every available alternative option.

This is not to say that veneers are a bad solution. In fact, when appropriately placed, I have found porcelain veneers to be the most predictable restorations that I have used throughout my career. Enamel will eventually need rejuvenation, as ageing nearly always brings erosion, staining and differential wear. Veneers placed, using an additive mock-up technique, are also highly effective and truly minimal in aligned situations as taught by many UK clinicians.

However, I believe that the recent trend of ‘instant orthodontics’ – a term coined by some US cosmetic dentists – has a lot to answer for. The term basically meant that teeth were being straightened using veneers ‘immediately’.

I am certainly not being conveniently critical from afar – this is something I have done myself many times.

But, at the time, this was the only viable choice. I have always offered my patients conventional orthodontics as the primary option, but it was amazing – and eventually predictable – how few adult patients would even consider a referral. For years then, heavy preps into dentine with the odd exposure and even elective endodontics were commonplace, but seen as acceptable collateral damage in the quest for beauty.

Besides, we have all watched those TV makeover programmes, and compared to the knife wielding that goes on in the body-sculpting theatres, veneer preps seem relatively minimal.

That was then – but like it or not, things have changed. I am wondering how many cosmetic dentists are still preparing heavily into dentine to correct crowded teeth with veneers? How many are still telling their patients that the alternative orthodontic solution might take a year or so?

The Inman Aligner has been in the news, magazines and all over the internet. Patients know about it. I don’t think it will be long before a patient realises that the teeth they had straightened with veneers costing £5,000-plus could have been treated non-aggressively with a simple removable appliance in less than 12 weeks.

That patient may well have a case to sue the dentist who placed those veneers – however beautiful – for not fully explaining alternative options.

And, of course, pre-alignment just does not end with the Inman Aligner. It can be performed with conventional and lingual fixed orthodontics and clear aligner systems too such as Invisalign and Clearstep.

Because a perfect overall orthodontic result may not be the desired goal, the outcome can often be far quicker than you think. Perhaps cosmetic dentists should be planning cases with orthodontists far more often, instead of trying to solve an alignment problem with a ‘big-daddy bur’?

How many cosmetic dentists have an in-house orthodontist ready and willing to treatment plan and co-treat cases with them? Certainly not enough from what I have seen, and this is something the British Academy of Cosmetic Dentistry (BACD) is trying to change by creating strong teaching links with the British Orthodontic Society (BoS).

When I first discovered the Inman Aligner, and applied it to my cosmetic patients about four years ago, I knew I was onto something special. It was clear that it had the potential to deliver a shock to the establishment of cosmetic dentistry.

I was very careful to tiptoe around the issue of over-prepping not wanting to offend. Four years on – and nearly 400 successful cases completed without a single incidence of root-resorption, loss of vitality, or significant bone resorption – and it is clear that the Inman Aligner has the ability to turn what many cosmetic dentists think, upside down.

It is time to speak out – and there is no excuse to claim ignorance. I like to ask cosmetic dentists: ‘If you were a patient, would you rather straighten your teeth by having them prepped for veneers, or would you rather wear a removable appliance that might take 12 weeks or less?’

The answer is clear and I think it is unfair and potentially risky not to ask that question to our patients. In the last two years since using the Aligner on a large scale, I have placed 50% fewer veneers. My practice in Sidcup is a fairly high-profile business and has attracted patients far and wide. We had a high turnover of cosmetic cases, ranging from simple whitening to large rehabilitations. However, a large proportion of patients merely wanted veneers because their teeth were crowded as well as being discoloured. Now many of these patients are offered an Inman Aligner, with or without veneers later.

It is very rare that once a patient understands how much tooth prep is involved, (we do this by showing prep models and using occlusal shots of the patients teeth) that they opt for veneers straight away. Most patients are very receptive to the fact that we are trying to align the teeth first and perhaps avoid prepping them at all.

This gives us the ability to compromise far less than we have been used to doing over the last 10 years.

The photos (figures 1 and 2) show exactly where, if treated with porcelain veneers, large amounts of tooth preparation would be necessary. When planning cases, and explaining all the options to patients, it should be made clear how much tooth preparation will be needed. When patients understand that the teeth can be straightened with a simple aligner in a matter of weeks – and the need for heavy preparations are reduced if not eliminated altogether – they nearly always chose to align.

Figure 3 shows the teeth after 10 weeks of alignment with an Inman Aligner. The cases outlined below show patients I treated some years ago in the first two cases and recently in the last two cases to highlight my new philosophy.

At the time, orthodontic treatment was ruled out by all the patients as it was seen as a slow alternative and less as an adjunctive.

This gentleman was in his early 30s. He presented wanting a nicer smile. My diagnosis was that due to irregular wear and upper crowding, his upper central incisors appeared very prominent. They were both mesially rotated. Parafunction over the years had caused the mesial corners of the centrals to wear heavily. The distal aspects of both central teeth were very prominent, protruding nearly 3mm from the facial aspect of the lateral teeth. Both laterals were extremely worn. Placing veneers on the worn laterals, canines and first premolars was elementary as these teeth were also in-standing, meaning we could build them out with relatively minimal preparations. However the two upper central teeth would need aggressive preparations on the prominent distal aspects, otherwise the profiles of the veneers would have been poor.

The patient totally ruled out any orthodontic alternative. He did not want to wait long to straighten his teeth and spend extra money when he already knew he was going to need veneers. He was also prepared to have endodontics on the central teeth if necessary. Both of these preparations were well into the dentine, and on both, pulp exposure was close but fortunately not caused. Temps were placed and used as a preview. Direct resin tips were placed over the worn lower teeth to open his bite using the Dahl principle. This helped to establish canine and anterior guidance. These still have not yet needed to be replaced. 8 Authentic Porcelain veneers were bonded and the patient was thrilled with his result.

Looking at this case retrospectively, I have been happy with the outcome and stability.

However, I certainly would not prep the upper central teeth like this anymore, without trying to align them first with an Inman Aligner. I expect these would have pre-aligned in less than 10 weeks and this is not much to ask especially if one is prepared to sacrifice vital tooth and nerve tissue.

Now treatment planning with Inman Aligners is par-for-the-course in cases like this. Patients who refuse to align teeth first need to be signed off with full consent before starting any aggressive treatment. Once they understand what we actually need to do to the teeth, they very rarely refuse to have an Aligner.

This patient presented as a smile makeover patient. She wanted whiter, straighter teeth. She was a post-orthodontic relapse case and had totally ruled out orthodontic treatment as she felt that it had failed the first time round. (It had failed only because she was not given any form long-term retention post treatment.)

She understood that the heavily rotated upper central tooth would need massive preparation and that endodontic treatment was inevitable. On the preparation visit the upper central tooth was exposed and endodontic treatment was carried out. The preparations on the other incisor teeth were also very aggressive, and well into dentine to ensure there was enough space to place porcelain. Temporary veneers were placed. 8 Authentic Porcelain veneers were fitted and the patient was happy with her outcome. When I look at this kind of case retrospectively, I realise just how much my philosophy has changed. I would now insist on using an Inman Aligner, as this case would have aligned in less than 12 weeks and it makes heavy preparations seem totally unnecessary and unethical. I would also be looking to whiten and just use bonding instead of using veneers, but they still would be an option of the patient desires. However, very often when patients see their teeth straightening so quickly, they often are so happy with the result that veneers are not necessary straight away.

I hope that this new approach reaches far and wide. It is better for our patients, better for us as dentists – and great for our reputation.

It is also great for the UK that this drive has emerged from our shores and not typically from the US, where cosmetic dentists have still not realised the potential of the Inman Aligner.

Although, the Aligner had been used by orthodontists in the US three years before I started using it in the UK, it was never used by cosmetic dentists in this way,

despite featuring quite heavily in the Journal of Cosmetic Dentistry.

This may have been due to post-ortho relapse being less of a problem – and due to the fact that traditional forms of cosmetic dentistry have been established for much longer over there.

This type of pre-alignment – before restoration and possible avoidance of any restoration – has been the nirvana of cosmetic dentistry for many years. 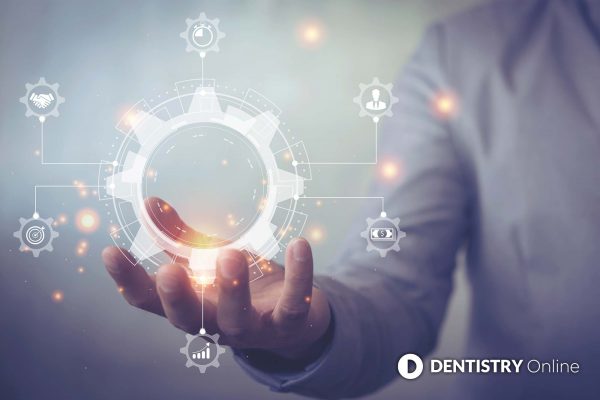 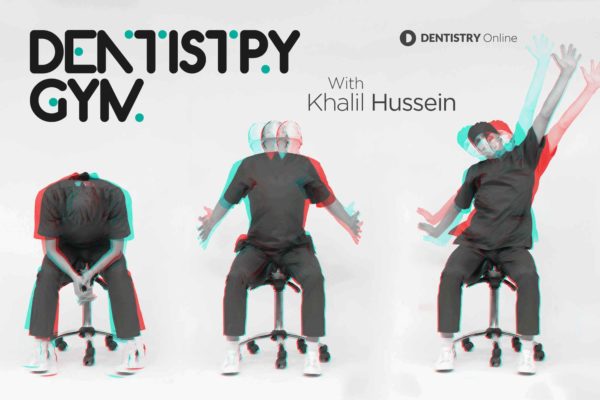