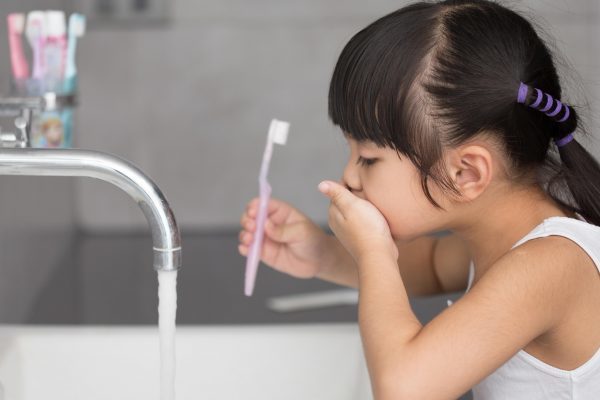 Around one in 10 children (12%) brush their teeth for under 30 seconds, a new survey has found.

And just over half, 58%, of parents said their children only clean their teeth for one minute and 30 seconds or less.

‘We commissioned this survey because the high rate of oral decay among children and adults is a serious concern,’ Paul Varga, CEO of Playbrush, said.

‘We wanted to find out more about why so many kids are not brushing properly.

‘The results confirmed what we suspected.

‘Tooth brushing is often a stressful time for both kids and parents.

‘The fact so many are not brushing for the minimum time recommended can have serious consequences in later life.’

The most common reason children give for avoiding brushing their teeth is because it’s ‘boring’ (40%).

‘It is important that children learn the right brushing technique early,’ Paul Ashley, head of paediatric dentistry at the Eastman Dental Hospital.

‘Playbrush is a great way to encourage teeth to be cleaned regularly, at the right speed and area of the mouth.’

Almost half (46%) of parents worry about their child’s teeth as a result of their brushing habits.

A quarter (24%) have lost their temper whilst trying to get their child to brush their teeth.

Whilst 71% said they believe children’s oral health could be improved using technology alongside traditional brushing methods.

‘I found this to be the case in my own personal experience, and this gave me the idea for Playbrush,’ Mr Varga continued.

‘My own godson absolutely hated brushing his teeth.

‘His mother tried to encourage him with brushing Youtube videos.

‘But as we expected, he would get distracted and simply forget to move his toothbrush around his mouth.

‘We thought, how can we encourage him to move his toothbrush?

‘That’s where the idea of connecting toothbrushes with mobile games came about – combining fun and dental health.’