Trumpeting the power of braces 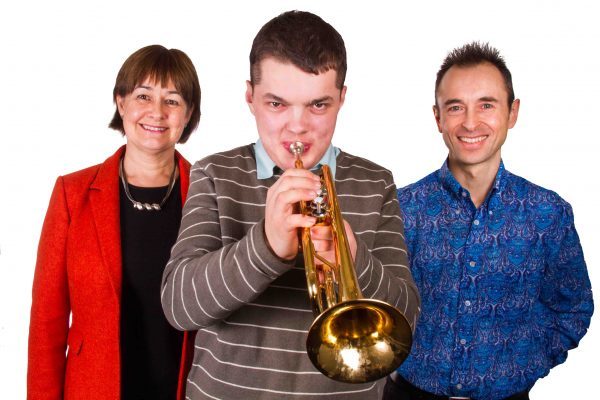 Against the Odds | BOS | orthodontics

Trumpeting the power of braces

This inspirational story demonstrates the impact of a collaboration between orthodontist and speech and language therapist. Lubo Rnic badly wanted to play the trumpet when he was in primary school. Try as he might, he was the only child in his class who couldn’t produce a single sound.

Seven years later, Lubo not only plays the trumpet, in March he will be playing in a school concert. The 17-year-old owes this achievement to the skill of an orthodontist and the initiative of a speech and language therapist. Peter Thomas is the Bristol orthodontist who carried out Lubo’s life-changing orthodontic treatment and Sarah Barnett is the speech and language therapist who had a hunch that braces could help Lubo. And she was right.

The story began when Sarah suggested to Lubo’s parents, Mihailo and Olya, that orthodontics might improve his speech and saliva control and eating skills – helping achieve less messy biting and chewing. Lubo has some disabilities, including dyspraxia and autism. His weak muscle tone and protruding teeth meant he couldn’t close his lips.

His parents looked around for the right person to provide the treatment, fearing that they would be turned down. But Peter Thomas of Bristol Orthodontics was willing. ‘I knew I could do the treatment but the question was whether Lubo would cope with the braces. I started out with trepidation.’

Mrs Rnic said: ‘We were apprehensive. But Dr Thomas immediately put us at our ease. He explained everything and showed us pictures and said there was a tiny chance that orthodontics would help with speech and saliva control.’ Lubo would have to wear a functional brace, which is designed to bring his lower teeth forward. Then he would have to wear fixed braces combined with elastic bands which would hook together his upper and lower teeth to improve the bite. Finally, throughout treatment, he would have to have his teeth cleaned by his parents at least twice a day, every day. But Lubo did not waver.

Now the amazing story of Lubo’s teeth-straightening has won him first prize in the British Orthodontic Society’s Against the Odds award. Not only was it a challenging treatment but Lubo had to be highly cooperative over the course of the two and a half years of treatment.

He began with the functional brace for nine months and then wore fixed braces for 18 months. Only a few weeks into treatment, his saliva control improved and gradually he found he could close his lips. By the end of treatment, when he was given a trumpet, he found he could play!

Mrs Rnic said: ‘We can’t begin to count the number of benefits that the treatment has brought Lubo. It’s exceptional for us that now, because he has a perfect bite, he can play the trumpet. But he is the hero in all of this. We helped him, but he was the one who did it.’

This praise is echoed by Peter Thomas. ‘Lubo was a delight to treat. He always came in with a smile and he never complained that his braces were awkward or difficult. Off the back of Lubo’s treatment I would like to see research into the impact of orthodontics on lip seal and muscle tone. Orthodontics is about so much more than teeth-straightening.’

BOS research director Professor Philip Benson is supportive of research into the impact of orthodontics on speech. He commented: ‘There is a reasonable amount of evidence that specific speech problems are associated with certain occlusal anomalies; however, I think there is little research showing that orthodontic treatment improves speech and this might be something to look at in future studies.’