Getting passionate about perio 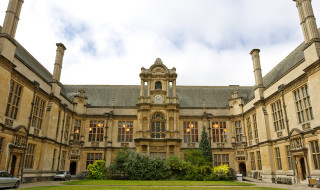 Getting passionate about perio

With a focus on ‘Evolution… revolution… solutions in perio’, the conference saw hundreds of delegates flock to the Oxford Examination Schools to hear presentations from visionary and inspiring speakers from all over the world.

Held over 7-9 April, the meeting took aim at some of the hottest periodontic topics, putting forward the latest thoughts and research in areas including evolutionary medicine, medicolegal considerations in periodontal therapy and new initiatives, such as Healthy Gums Do Matter.

In his opening address, BSP president Phil Ower admitted that while the society’s diverse membership is one of its strengths, it also makes it tricky when it comes to putting on a large event.

Trying to please as many people as possible is always challenging, but the BSP overcame it by having numerous parallel sessions.

Phil started off the proceedings by welcoming the numerous delegates and providing an update on the BSP.

‘This is a very exciting time for our society,’ he said. ‘I think we are genuinely entering a new era; three years ago we started developing an ambitious strategic plan for the society and we are now delivering on this.

‘We have a new logo. We have developed strong relationships with a set of partners, and we have a fabulous new website. We have updated the Young Practitioners Guide, which is now called the Good Practitioners Guide, and as part of that, we have revised the BPE guidelines to be more GDP-friendly.’

But progress has not stopped there, he added. The BSP has also launched a major new public awareness campaign that coincided with European Gum Health Day on 12 May.

And Phil also took special care to welcome the the 25% of conference attendees who had not been to a BSP meeting before.

He explained: ‘We tend to regard these conferences rather like family gatherings. It’s the sense of community at these events that make them unique, so to a quarter of you, I would like to say welcome to the BSP family!

‘The BSP has been my professional family for more than 25 years and I can’t help reflect on what led me from being a perfectly content GDP with only a passing interest in perio to president of this society. But actually, when I think about it, I can summarise this peculiar career path in one word: inspiration.’

Phil drew on this concept to talk about the people who have inspired him throughout his career, putting Bernie Kieser top of the bill: ‘He taught me so much, and not just about perio. Most importantly, he taught me to challenge received wisdom, and to be prepared to be challenged.’

It was fitting then, that the challenging theme of evolutionary medicine was writ large throughout the meeting, and Phil urged the audience to pick up the book that first put him on this path – Why We Get Sick: The New Science of Darwinian Medicine by Randolph Nesse and George Williams.

Citing the book as ‘inspirational’, he spoke of his delight at having one of the authors on the spring meeting line-up.

‘I was thrilled when Professor Nesse, one of the world’s foremost evolutionary theorists, accepted the invitation,’ he said.

The book made him think about periodontics ‘in a completely different way’ but furthermore, Professor Nesse was responsible for introducing Phil to another visionary figure in his life – the late Professor Aubrey Sheiham.

Professor Sheiham was due to chair Friday’s forum though the sense of loss at his passing went far beyond that, as Phil paid tribute to his work.

‘Aubrey was a huge advocate of evolutionary thinking in relation to oral health,’ said Phil.

‘Both Aubrey and Bernie, in their respective fields, were amongst the first supporters of an evidence-based approach long before it was fashionable to do so, and both were renowned for their persistent challenging of professional orthodoxy.

‘Aubrey and I had several lengthy and fascinating conversations, and the result was Friday’s programme as part of this meeting; I could not have put this meeting together without his help.

‘He was genuinely excited about this because these concepts had never been discussed in a UK dental meeting before, and I was excited because I’d found someone who shared my views and this reassured me that I wasn’t completely barmy!’

But last November Phil received sad news from Aubrey, saying he was gravely ill. The week prior to his death he apologised for not being able to make the conference, but promised to line someone up to take his place and do justice to the topic – and true to his word, a few days later, Jeremy Taylor’s name came up.

Phil added: ‘In order to recognise Aubrey Sheiham’s contribution to UK dentistry, and on behalf of the BSP, I would like to offer our condolences to Helena [Aubrey’s wife] and dedicate this meeting to his memory.’

Jeremy honoured Aubrey’s memory by opening Friday’s clinical ‘Understanding our microbiome – an evolutionary perspective’ sessions with an introduction to evolutionary medicine and dentistry.

During his presentation ‘How important are bacteria – how important is the host?’, Professor Lang talked about the historical concepts of infection and their role in the aetiology of periodontal diseases.

Delegates got a chance to explore the trade exhibition during the coffee break that followed, before heading back to hear from Professor Nesse on ‘How evolutionary thinking is transforming our understand of disease’. The session considered the topic of natural selection, and asked why it hadn’t made our bodies better – for instance, by removing our wisdom teeth or making our bones stronger. The old-school answer is that natural selection is too weak, but Professor Nesse offered six new reasons (mismatch; co-evolution; constraints; trade-offs; reproduction at cost to health, and defences) to consider.

He argued that a shift in perspective was needed, saying ‘it’s time to look at things from an engineer’s view, and not from a mechanic’s.’

Professor Curtis explained the concept of microbial symbiosis and dysbiosis in oral health and disease in the final presentation before the morning’s speakers answered insightful questions from the audience. With everyone agreeing that the presentations were ‘truly inspirational’ and provided ‘stunning data’, it was time for lunch.

Professor Nesse returned to the stage after lunch to talk about what evolutionary biology offers to medicine and dentistry. While Professor Graham Rock explained why exposure to microbial biodiversity is essential for optimal function of the immune system, and reviewed the contribution of oral microbiota.

Another panel discussion followed Dr Robert Aunger’s hygiene and human behaviour presentation, which demonstrated the principles of how to get people to change their behaviour.

The afternoon’s parallel session, ‘Perio in general practice’ was chaired by Dr Rajiv Patel, who oversaw Manchester dentist Shazad Saleem’s update on the Healthy Gums Do Matter project, revealing the pilot’s results for the first time.

On the discussion about medicolegal issues relevant to perio in everyday practice, Raj Rattan engaged his audience with humourous stories. Raj mirrored Professor Nesse’s sentiments, urging a shift in mindset, this time from treatment to prevention: ‘We cannot solve the problem until we get to the root cause, which is the system.’

Saturday’s lectures picked up where the previous day’s learning had left off. Friday’s onus on ‘Understanding our biome’ became the Saturday session ‘Living with our biome – antibiotics, probiotics or no biotics?’ that took a practical view of the current evidence.

Professor Cristiano Tomasi discussed management of the root surface while the use of antibiotics came under scrutiny from two different viewpoints – clinician Neil Paterson and microbiologist Professor Mike Curtis.

The parallel session focused on ‘Disease management – surgical options’, which welcomed a roster of international speakers to look at the hands-on implications of care.

Professor Leonardo Trombelli’s in-depth discussion of regenerative techniques dominated much of the morning, but was well-supported by Professor Maurizio Tonnetti’s lecture on decision making and Professor Angelo Mariotti’s talk on surgical technique.

Professor Tonnetti went go on to tackle the issue of implants in perio-susceptible patients, but not before the event paused to recognise the great research being carried out in the UK.

The Sir Wilfred Fish research prize was awarded to Dr Helen Roberts, who presented her winning research on characterising neutrophil dysfunction in Papillon-Lefèvre Syndrome to the audience. The prize was first instituted in 1970 and aims to encourage researchers in the early stages of their career.

Elsewhere, the winners of the poster prize competition were revealed as Dr Firas Al-Taweel, for their research poster on porphyromonas gingivalis targeting epithelial cells, and Dr Anke Braeuning’s clinical poster on severe periodontitis and implant as an adjunct to tooth preservation concepts.

Between the depth of clinical guidance and scientific discussion on offer, the BSP Spring Meeting rose admirably to its self-stated challenge of remaining relevant and interesting to a diverse audience.

Its twin themes of evolution and inspiration could not have been more fitting, running throughout the meeting – and showing the ambition of the British Society of Periodontology itself.

Dealing with pressure and stress during COVID-19 and beyond

18hr Dentistry
Dentistry Online uses cookies to give the best experience. If you continue to use our site, we will assume that you agree to the use of such cookies. Read More.
Accept