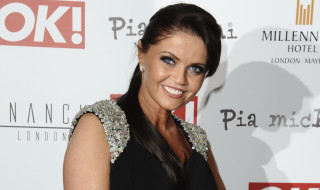 The ex-Eastenders actress is a finalist in this year’s contest, with the winner to be crowned tonight.

Daniella admitted that she was allowed to leave the house to have the procedure performed during the show’s second week.

The revelations were made on the show during a fake press conference task, which was hosted by Vanessa Feltz.

Vanessa questioned Daniella about an argument she had with fellow housemate Stephanie Davis, after Stephanie hid a shoe in Daniella’s bed.

Of the incident, Daniella revealed: ‘I’d just been out to have my veneers done when that happened.

‘I was worried about infection.

Daniella was also recently featured on Celebrity Botched Up Bodies, which discussed the soap star’s breast implants and damaged teeth.

On the show, Daniella visited a dental clinic to correct a denture that did not fit.

She had been fitted the denture as a result of losing her back teeth in a car accident.

Said Daniella: ‘I’ve had sleepless nights and crying about the state my teeth are in’.

In the programme, Daniella told the dentist to remove her upper teeth and replace them with implants.

However, the actress was worried that because of her 20-a-day smoking habit, her bone stock would not be in a strong enough conditions support the implants.

‘Sometimes you want to go out for dinner and have a great big bit of steak but I can’t do that – I’ll probably bite in to it and [the implant] will be stuck in the meat’, she said.