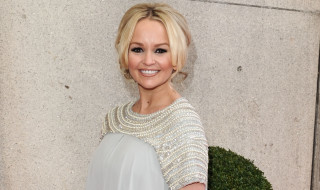 Jennifer Ellison has been confronted by her sugar addiction live on This Morning, prompting the soap star to exclaim, ‘I’m surprised I’ve got teeth!’

This Morning hosts Holly Willoughby and Philip Schofield presented Jennifer with 3,000 cans of cola – the amount that the actress and dancer would normally consume in one year.

The revelation was made due to Jennifer’s recent appearance on Sugar Free Farm, a three-part ITV documentary that challenged celebrities to go without sugar for two weeks.

Thirty-two-year-old Jennifer admitted to Holly and Phil that she would regularly consume six to seven cans of cola a day, equal to 79kg of sugar a year.

Jennifer said: ‘With three little boys, I’d get up in the morning, low on energy and have a can of Coke and it’d go on from there throughout the day.

Jennifer admitted that during the first few days of the sugar-free diet, her head ‘felt like it was going to pop’.

‘I had the worst headache I’ve ever, ever felt.

‘If you’ve ever detoxed, take that feeling and times it by 10.

‘We were detoxing from processed food, sugar, alcohol, everything.

‘It was literally like someone had put my head in a vice and was just twisting it and twisting it.

‘I went straight to bed when I got in and when I woke up the next morning I still felt a bit groggy, but I started to turn a corner and I felt a bit better.’

The former Brookside and Dancing On Ice star believes she was ‘hit the hardest’ on the show, as it was revealed that her diet contained the highest sugar intake of all the contestants.

However, Ellison claims that she has now kicked her fizzy drinks habit after appearing on Sugar Free Farm, stating that she hasn’t had a fizzy drink since.

1637d
|
Celebrity News
Dentistry Online uses cookies to give the best experience. If you continue to use our site, we will assume that you agree to the use of such cookies. Read More.
Accept