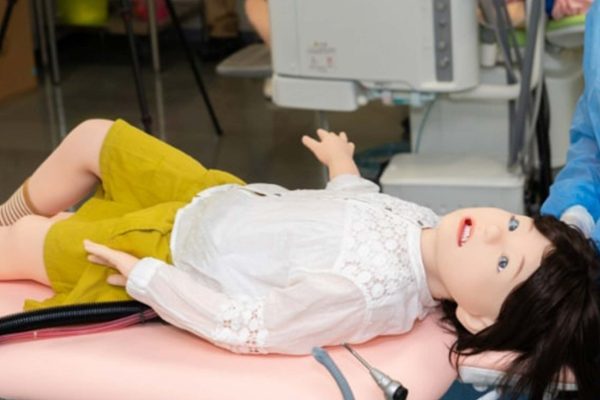 Researchers have designed a human-like robot that mimics behaviours of a child in the hope of training dentists.

Developed by a dental school and robotics company, Tmsuk – both based in Tokyo, Japan– it imitates critical symptoms such as vomiting, fitting and crying.

Named Pedia_Roid, it is controlled using a tablet programmed to stimulate different responses. This sends signals to air cylinders in the joints of the silicon robot that provokes movement and other expressions.

The robot is aimed at both dental and medical students during their training. Developers said it helps to fill a gap where there are ‘few opportunities for clinical training for children in the field of medical education’.

Developed by Showa University’s Department of Orthodontics, other symptoms the robot imitates include:

It is also possible to cut teeth and replace them individually.

Weighing 23kg, the robot is 110cm tall and modelled on a child aged five to six years old. Currently, the doll costs around 25 million Japanese yen – equivalent to more than £150,000.

8hr
|
Dentistry
"Company" would like to send you relevant email communications to this webinar, by opting in to receive these emails you are agreeing to be sent email communications by "Company".
You can opt-out at any time.
Dentistry Online uses cookies to give the best experience. If you continue to use our site, we will assume that you agree to the use of such cookies. Read More.
Accept