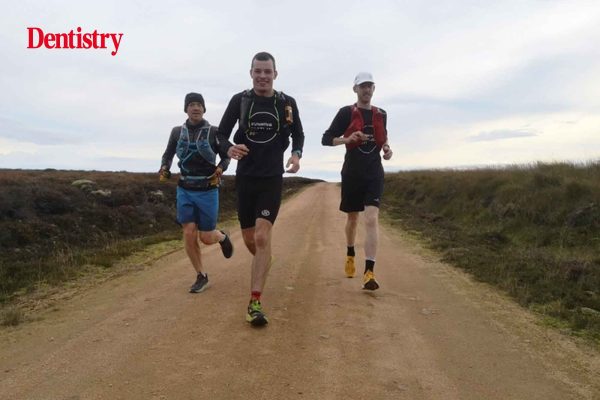 We speak to Stuart Campbell about his phenomenal challenge to run the length of Scotland and raise money for SAMH.

What is Running Scotland?

Running Scotland is an idea that myself and a few other dentists devised during lockdown when we were looking for a challenge.

We are all runners, and did marathons and half-marathons. During lockdown when all of the dental practices were closed and we had a little more time on our hands, we just started pushing the distances a bit more.

That led to running 30/40/50 miles and then you get carried away. We thought we could probably run Scotland if we put our minds to it.

That idea grew arms and legs and that became Running Scotland.

What were the details, where did you run from and to?

We wanted to run the length of Scotland. So that was John O’Groats, which is the natural point at the top, and Gretna Green was the English border. It was basically point to point from John O’Groats to Gretna Green.

We wanted to take in a couple of Scotland’s world class running trails, and incorporate this into our route. The main one being the West Highland Way and the other being the Great Glenn Way.

We mapped it so that we could run through those two trails.

How far did you cover per day?

We did it over 11 consecutive days, we didn’t take any rest days. In hindsight that was probably a good idea, I think we would have struggled to get going again.

It was 11 consecutive days, more or less we were running eight to 10 hours a day. It was like a working day of running.

We were supported by a two-man support crew from a company called Sandbaggers. They assist with lots of things in the past like, Sport Relief. They’ve taken companies abroad to do survival expeditions.

As it happened, they were grounded because of COVID. A running coach friend of mine put me in touch and they assisted with the logistics, planning, accommodation, nutrition and ensuring that we had appropriately positioned checkpoints on the route.

What kind or range did you end up running each day?

The shortest day was 28 miles; the longest day was about 51 miles. The next day we would get up and carry on.

I don’t quite know how we did it. We would get up, hobble around like broken men and within half an hour we were back on our feet again. Peer pressure was part of it I think.

Who did you run with?

There’s four of us that started it – all dentists from Scotland. There was myself, my colleague in my practice Ryan, who is a general practitioner, Paddy Watson, who is a dental researcher at Glasgow university and another dentist Derek Marner from Green oak, near Glasgow.

Derek got about half way and he succumbed to a knee injury that the support team said he couldn’t go on with. I think if it was up to him, he would have continued.

The other three of us managed to get to the finish line, hobbling and limping.

What kind of things were you eating, how much did you have to eat. Was it a struggle?

You get to checkpoints and, normally with running you don’t want to have food in your stomach, but it’s like fuelling a car. You feel yourself getting low and you immediately want to eat.

We would sit down at checkpoints have bagels, pizza, watermelon, crisps, chocolate bars, coffee, tea. It was like a big picnic through Scotland really.

You’ve completed the run now, what did you do it for?

We did it to raise awareness for SAMH, which is a mental health charity in Scotland.

During the course of lockdown, we were starting to see stories of people struggling with mental health. Particularly in the dental profession when there was an uncertainty about the profession reopening, and about what they were going to do.

People didn’t really know how to plan going forward, which of course can have an impact.

We found that running was what we found had very positive benefits during lockdown. It was a good stress buster.

We thought if we could try and tie the two together, that would be something worthwhile. Taking on a challenge like this, we wanted to do it for a charity. That was a charity we wanted to shine a light on. 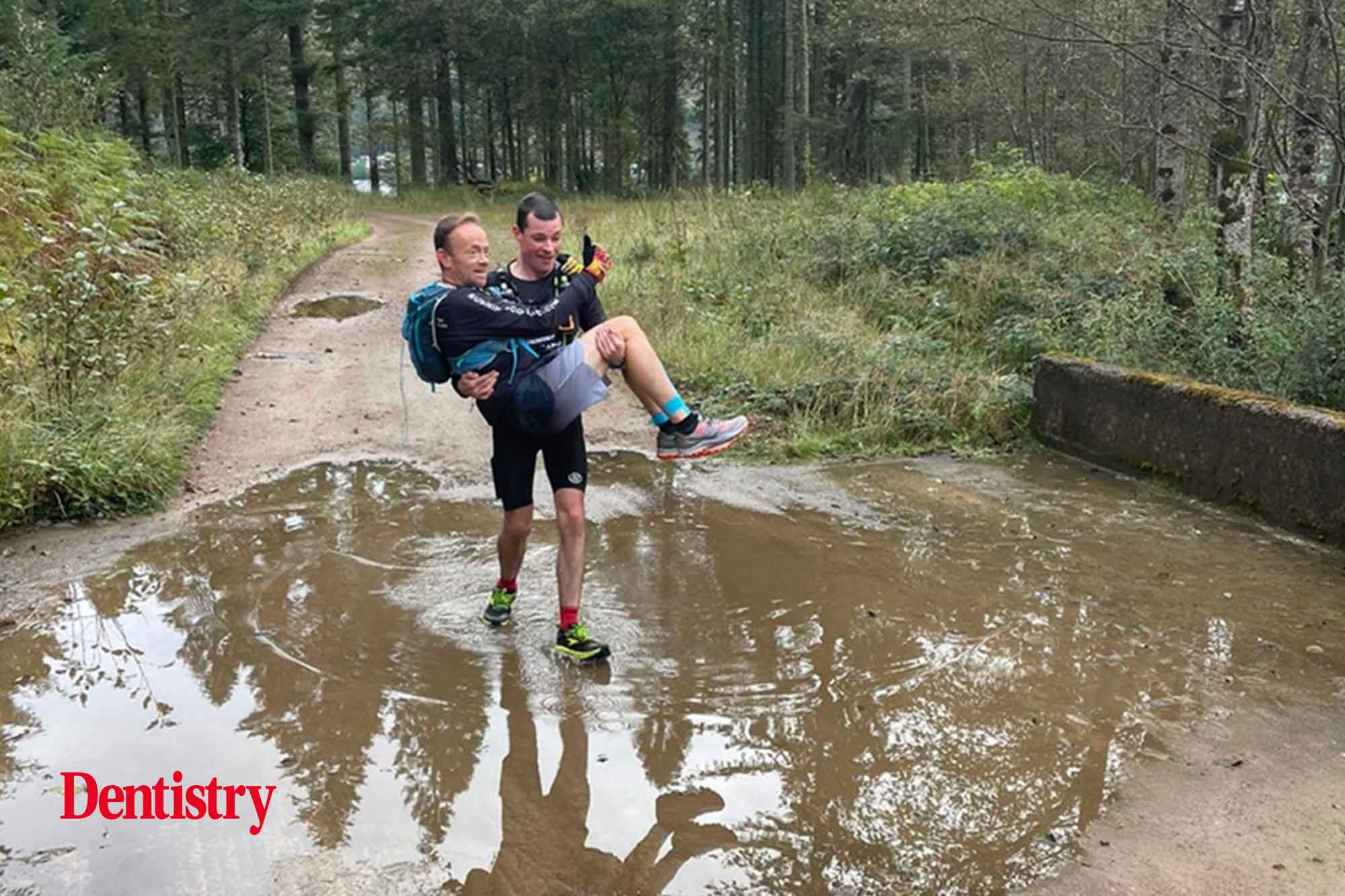 How long have you been into running for?

I took up running in my late 20s. My dad has done it for a number of years, he registered for a marathon one year and had a spare place. I said I’d take the spare place and he scoffed. That was it, that was the challenge set.

That was about 29 years ago. So I’ve probably completed a marathon or two every year since.

I hadn’t gone beyond that distance until lockdown when we decided that now is as good a time as any because we can’t work.

Did you enjoy the challenge?

We did. Looking back there were days that were tough but overall, I loved it.

Being outside and seeing that scenery, it was boyzone adventure stuff. Were we going to make it, were we not going to make it? I really loved every minute of it, despite the injuries. 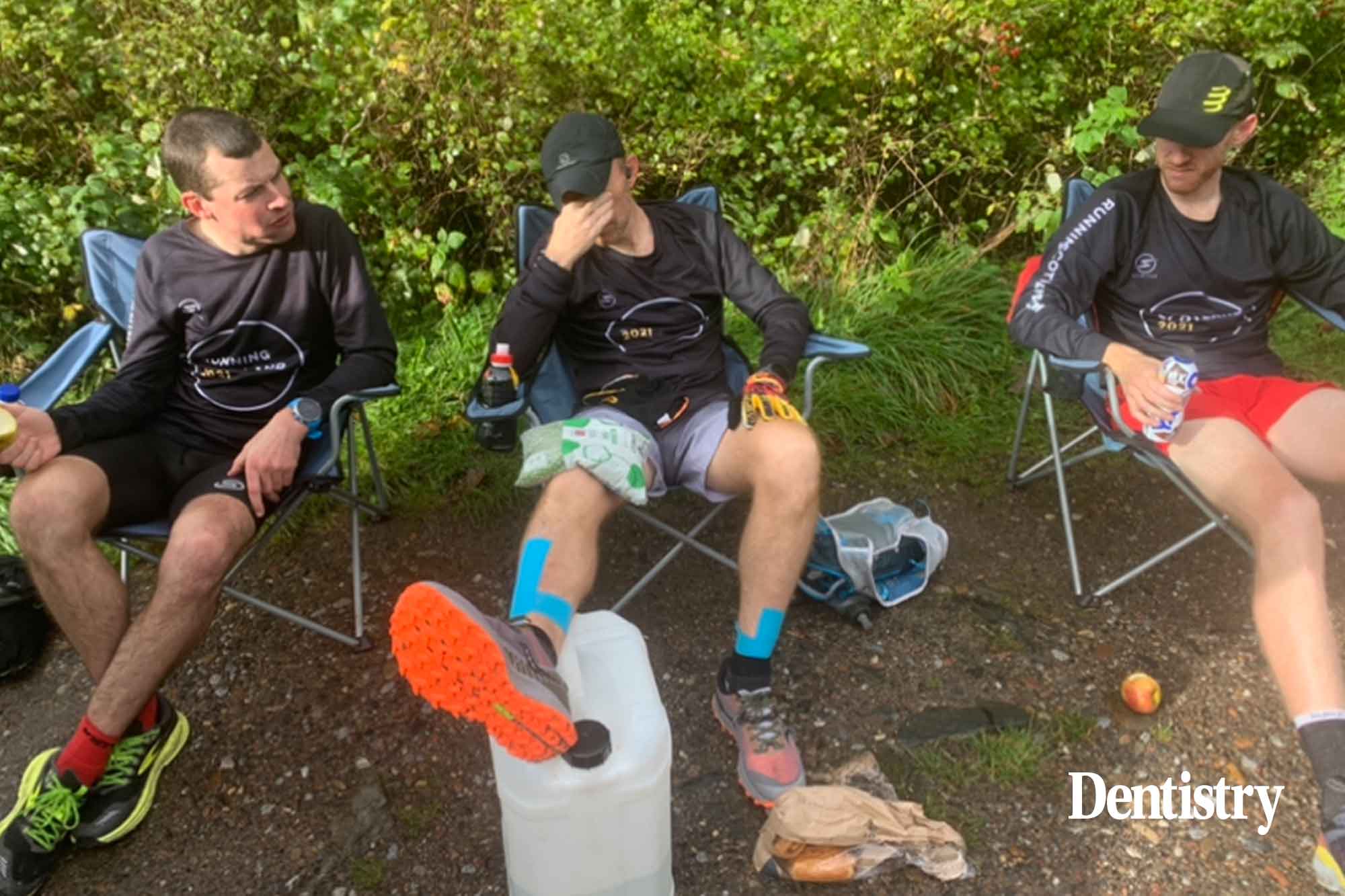 Did you have hotels that you were staying at each night?

The original plan was exactly as you just described. It was a really nice idea that we’d run a certain distance and finish it on the door of a hotel. But it didn’t always work out like that.

For instance, the weather on a couple of days was horrific and we didn’t cover the distance that we wanted to. So, we had to rearrange accommodation. But the support crew took care of all of that, which was a huge plus for us to not have to think about that on top of running. It would’ve been a logistical nightmare.

Those guys really took care of everything as far as that’s concerned. They just said you’re not staying there tonight guys, you’re staying here.

There was another night where we were doing really well and we just had 12 more miles to cover. They said that darkness is going to set in during this 12-mile stretch you’re about to enter. They said: ‘We aren’t going to let you do it because the terrain is horrific, you can’t do it in the dark’.

At this point it was about 5:00pm, we were thinking, it’s only 10 miles, what are you talking about. That 10 miles the following day took us four hours to cover.

Thankfully we had those guys because we’d probably still be there now. It was horrendous, like a rollercoaster of terrain with shell, rocks, streams, branches, just un-runnable basically.

The alternative was to go around Loch Lomond, adding an extra 90 miles to the journey.

Thankfully we did it in daylight. We had a nice hotel booked for that night which changed to a bunk house – four guys crammed into a garden shed basically.

How are your knees and toes now?

One of the other guys has a knee that looks like a watermelon. One guy has nothing – we can’t quite understand it, he’s got no injuries, no lack of energy. He said he’s going for a run this weekend. 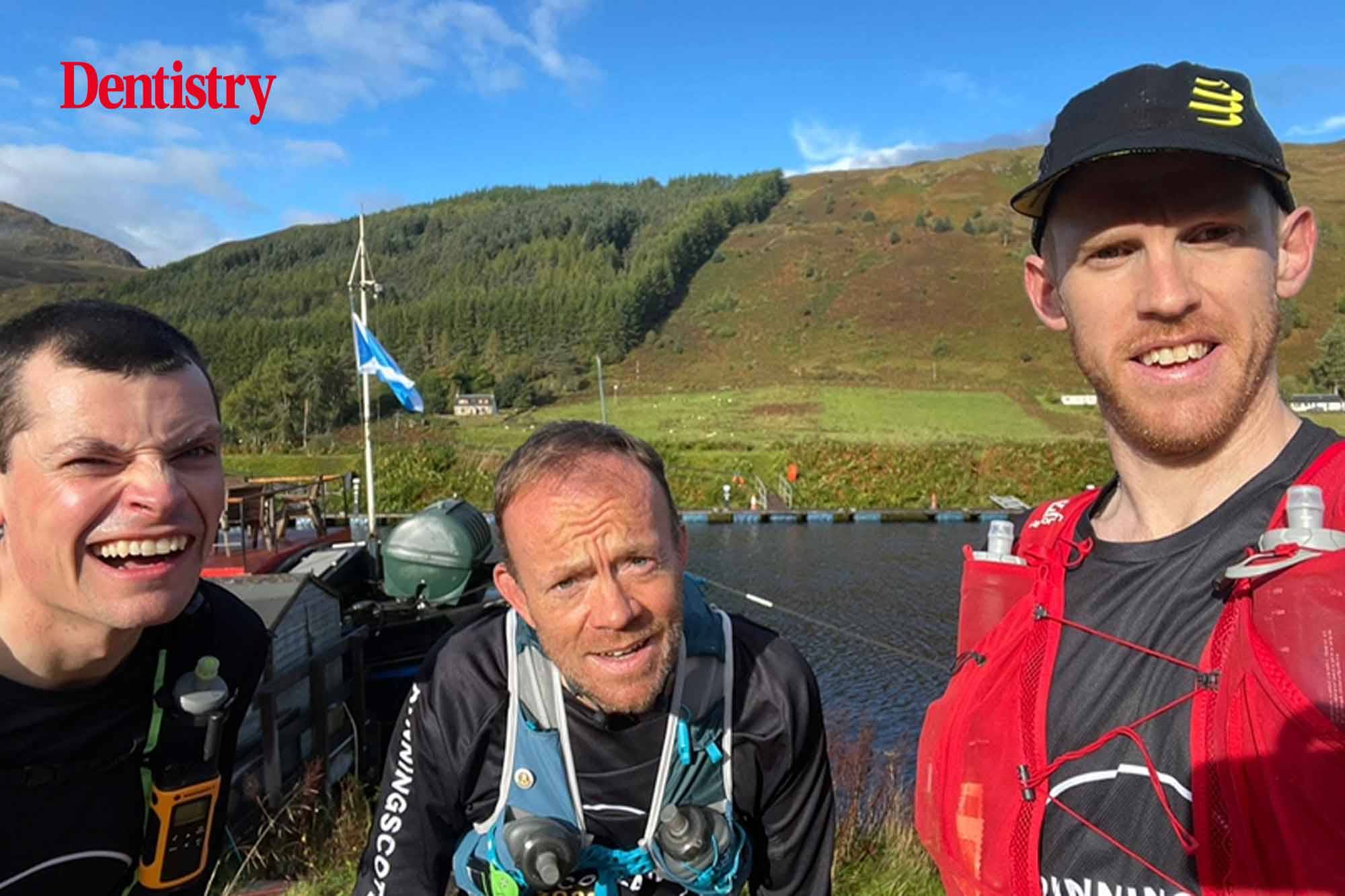 What trainers do you wear?

Hoka mainly, my garage is like a cemetery to Hoka trainers. I just generally find a pair that I like and stick with that and re order on the internet.

Interestingly during the run, I started off running in a size nine, but by the end I was running in a 10.5 because of the swelling.

A guy who does a bit of running coaching for me, he drove up to Inverness to give me a bigger size of shoe because I couldn’t find them anywhere.

They were Sauconey trainers. I’d never run in them before, I’d never broken them in, and actually they felt like slippers. Because they were bigger compared to the ones that I had they felt like the comfiest trainers I’d ever had.

How do you find running fits in with dentistry?

It’s difficult, dentistry is a demanding job, long hours at times. So I think that you just have to take any nook and cranny of time that you can.

If that means getting up before work and going for a 10k (which is the last thing that you want to do at five in the morning), once you’ve done it, the day seems to feel much better.

Equally, after work you’ve finished with your last patient, you look outside and it’s raining. But sometimes I’ll take the bus into work so that I simply have to run to get home.

It’s a good boost at the end of the day. 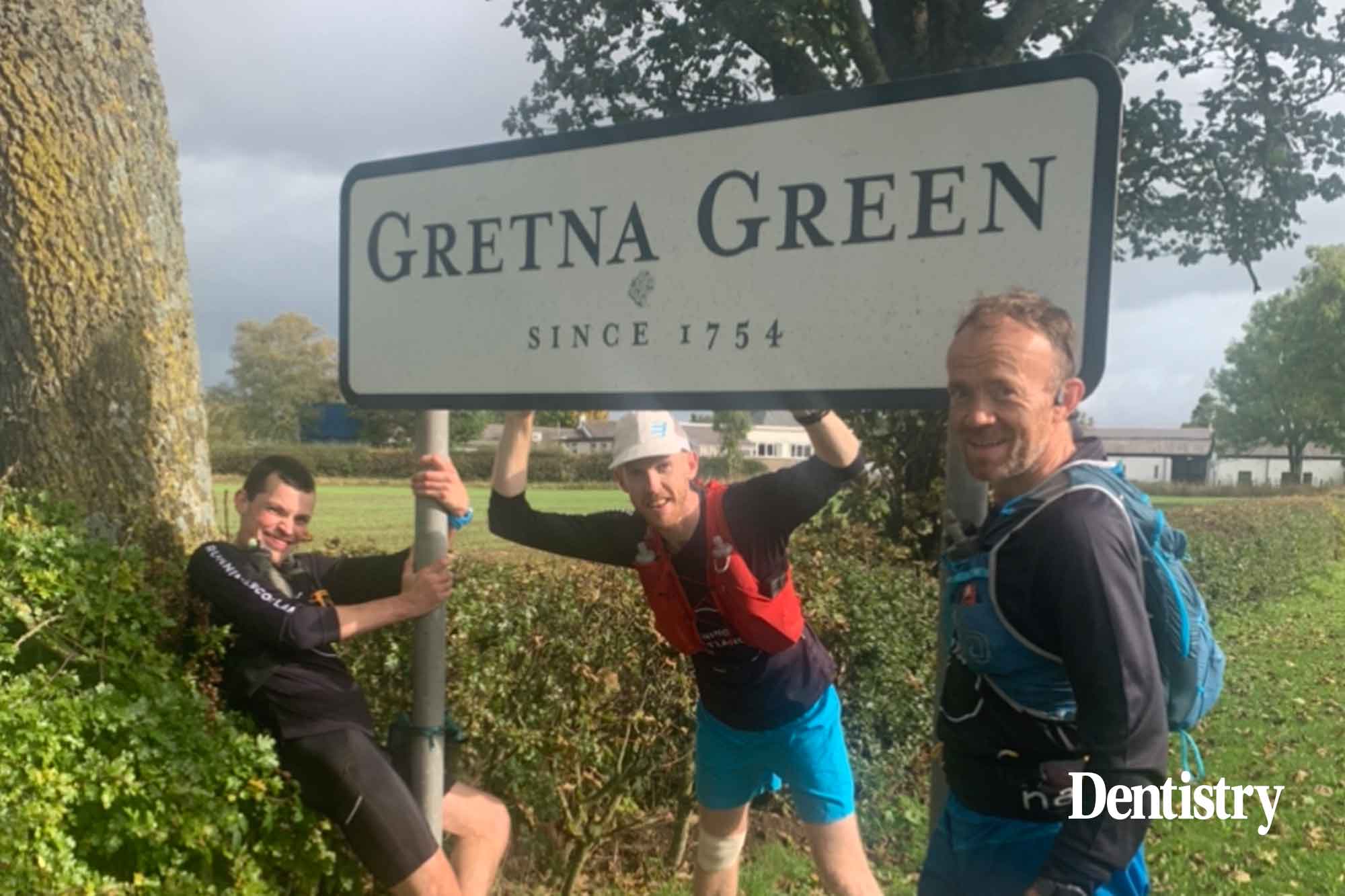 The challenge is finished now but can people still get involved and donate?

For sure! We have a website that was kindly donated to us when we were setting this up.

A number of dental companies got on board to help us to prepare for this. A number of sponsors helped us to fund the expeditions. Also, a lady called Rachel Barrow kindly gave up her time and said that she would donate us a free website.

The website is called ‘Running Scotland’, she did a great job to get that domain.

If you go to the support page on Running Scotland, you’ll find a Justgiving page there.

We set an initial target of £5,000 for the charity and we’ve almost reached £12,000 now. We’ve been overwhelmed with donations from the dental community particularly.