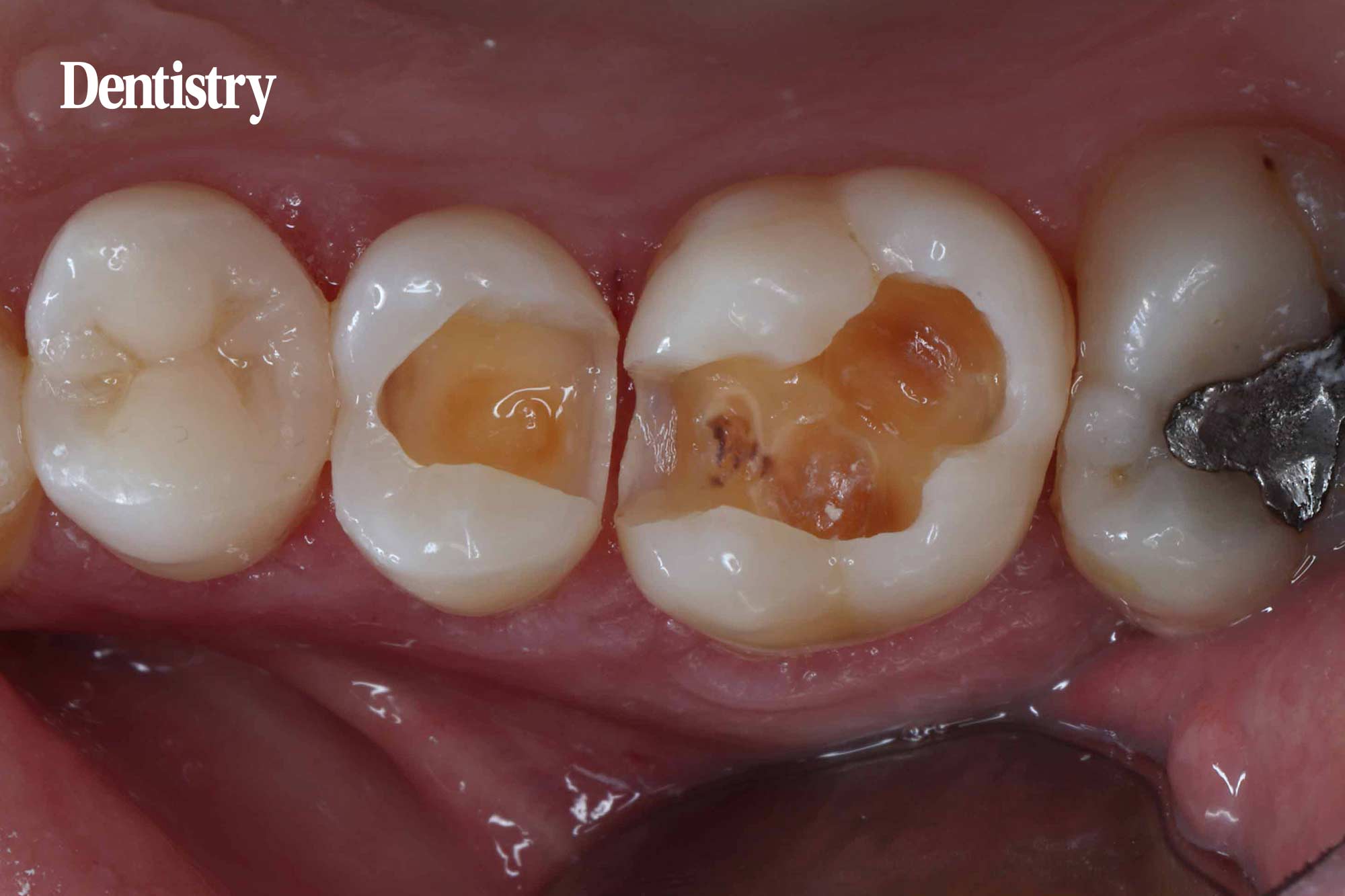 Vishaal Shah presents a case in which the challenges of treating caries were overcome with skill, attention to detail and appropriate selection of his ‘go-to’ equipment and materials.

If delivered with sound knowledge of anatomy and occlusion, composite restorations have been proven to stand the test of time.

When combined with patient education on maintenance, both at home and by professionals, the rates of failure and subsequent need for replacement of restorations can be minimised.

A male in his mid-thirties presented at Dentality @ Hoddesdon. While he was not in pain, his gums bled frequently and he admitted he had previously neglected his oral hygiene.

He was generally fit although taking medication for the treatment of asthma. The gentleman is a heavy consumer of fizzy drinks and sugary snacks. He had been an irregular attendee at the clinic.

Extraoral and intraoral examinations and an assessment of the temporomandibular joint were carried out. It was established that the patient had poor general oral hygiene. His daily dental routine only included brushing once, with no interdental cleaning regime.

He suffered from bleeding on probing in several places. There was evidence of plaque and calculus in all sextants. His basic periodontal examination score was two in all sextants.

The patient suffered with mild bi-maxillary crowding with an anterior cross bite. He had caries in several teeth. Heavy incisal edge wear was recorded on the UR1, UL1 and UL2. The UL3 was crowded out buccally and was distally rotated. The gentleman had a class I bilateral molar relationship, and a class II, division II incisor relationship with no overbite or overjet.

There was an anatomically inadequate disto-occlusal composite restoration on the UL5. This showed signs of leakage and distal caries at the base of the restoration (Figure 1).

An anatomically inadequate occlusal restoration on the UL6 appeared sound with no signs of leakage or caries. The caries on the UL5 could not be clearly identified on the bitewing radiograph. Although, this was obvious on clinical examination.

The treatment options included doing nothing, replacing the restoration on the UL5 and assessing the UL6 after cavity preparation or, should caries be detected on the UL6, restoration of both teeth with either a high copper content amalgam or high filler content composite resin material.

The patient opted for composite resin restoration on both teeth, if needed.

Local anaesthetic was administered to the patient by buccal infiltration. Cavity preparation commenced with removal of the UL5 composite (Figure 2), taking care to conserve as much tooth structure as possible and prevent damage to the UL6.

Stained and carious enamel and dentine were noted on the mesial surface of the UL6. This was following completion of the initial cavity preparation on the UL5 (Figure 3). The patient was shown photographs of the teeth and the extent of the caries in the UL5. The mesial caries on the UL6 was also photographed and explained to the patient.

He consented to proceed with composite restoration of the UL6, and was told that the entire existing UL6 restoration may also need to be removed if the caries extended underneath.

The initial plan was to remove the caries on the mesial surface only by accessing the UL6 from the distal cavity of the UL5 (Figure 4).

The aim was to avoid compromising the marginal ridge, keeping it intact at this stage in order to maintain the strength of the tooth.

Further photographs were taken and shown to the patient. It was explained that a mesial-occlusal restoration would be needed on the UL6 (Figure 5).

The available options were either restoration with composite or amalgam or, alternatively, termination of the caries excavation and restoration of the drilled site with glass ionomer cement. The patient gave consent for restoration of the second tooth and, since he was the last patient of the afternoon, treatment continued on the same day.

If this had not been possible, I would have placed a temporary restoration in glass ionomer or zinc oxide-based material and booked a further appointment for the patient. Time constraints would therefore have been overcome, enabling the restoration to proceed to the best of my ability.

The disto-occlusal cavity preparation was completed on the UL5. The UL6 mesial-occlusal composite was removed, including all underlying caries. Care was taken to ensure that the amelodentinal junction was clear of caries by at least 1mm throughout (Figure 6). At this stage, the UL6 and UL5 cavity margins were relatively sharp. These were then bevelled and cavity preparation completed.

Rubber dam was placed and care was taken to invert it throughout the treatment site. A Coltene Wingless W2 clamp was used on the UL7 to ensure that the working field was easily accessible. The full sextant was isolated, including the UL3. The UL5 and UL6 were sandblasted with 27 micron aluminium oxide powder. The teeth were etched with 37% phosphoric acid gel for 20 seconds (Figure 7).

Primer and bonding agent were applied and light-cured in accordance with the manufacturer’s instructions.

The depth of the cavity was measured and an appropriate sectional matrix was selected. I used the Palodent V3 system that, being made of metal, is strong in thin sections. A wedge was then placed to secure the matrix in position. A slight overhang on the mesiobuccal extremity was removed with a scalpel (Figure 8).

When cavity preparations are within the mesial or distal wall curvature, I prefer using a Garrison Composi-Tight 3D ring (3D500), the shape of which engages deep into the interproximal embrasure, buccally and palatally (Figure 9).

My ‘go-to’ composite for posterior restorations is Kulzer Venus Diamond. Having used a wide range of materials, I find that Venus Diamond works especially well in my hands, offering a high filler content and exceptional mechanical performance and durability (Figure 10). It also has a longer working time and packs easily in the posterior region.

In my opinion, enamel shades are not entirely necessary on posterior restorations. The Venus Diamond opaque dentine shade A3 was applied. I began by placing a layer of composite at the base of the cavity, and then built up the tooth, cusp by cusp.

The mesial wall of the UL6 was built up and the overhang removed, followed by the distal wall of the UL5, avoiding overhangs. A good interproximal embrasure shape was achieved, with a contact point sufficiently wide to prevent food from packing in the area. Care was taken with application of the composite for build-up of the marginal ridges, as these should never be too thick.

The wedge was left in situ throughout the procedure, as removal could cause bleeding under the rubber dam and lead to contamination of the site. The mesiobuccal, distobuccal and distopalatal cusps of the UL6 were built up. The oblique ridge of the UL6 was also restored. The palatal fissure was used as a guide to help place and carve composite into the right area.

The UL5 cavity base was also built up and marked in order to guide restoration of the cusps (Figure 11).

Once restoration of the UL6 was completed, the UL5 cusps were built up incrementally.

The final effect was created with a touch of colour using Kulzer Venus Color in choco, white, amber and blue shades. I find that these stains stand the test of time, ageing appropriately with the natural dentition (Figure 12).

With the Venus Color shades applied, the final light-cure was carried out through glycerine gel to prevent the oxygen inhibition layer (Figure 13). The wedge was removed and the restorations were carefully examined for any irregularities, or superfluous or excess composite, after which the rubber dam was removed.

Occlusion was checked in the maximum intercuspation position as well as in protrusive and excursive movements (Figure 14). Heavy contacts were noted on the mesiobuccal cusp incline and on the distobuccal cusp tip. Otherwise good contacts had been achieved throughout the sextant. The heavy contacts were all modified with diamond finishing burs.

The patient returned two weeks later to have restorations placed on the right side of his mouth. He reported no postoperative symptoms, such as sensitivity or food packing.

Reflecting on the case, the oblique ridge and distobuccal cusp interface may have been slightly improved. Care needs to be taken to avoid overbuilding this section on a first permanent molar. Heavy adjustment can result in loss of the anatomy intended to be created.

However, this gentleman was very appreciative of the attention paid to creation of the restorations, which have delivered function and anatomical aesthetics. He was also impressed with the level of detail that was explained to him about his treatment. The patient has since been motivated to look after the rest of his mouth and his general oral hygiene has dramatically improved.