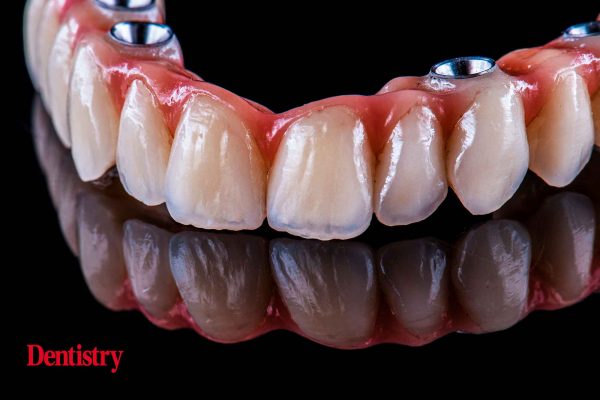 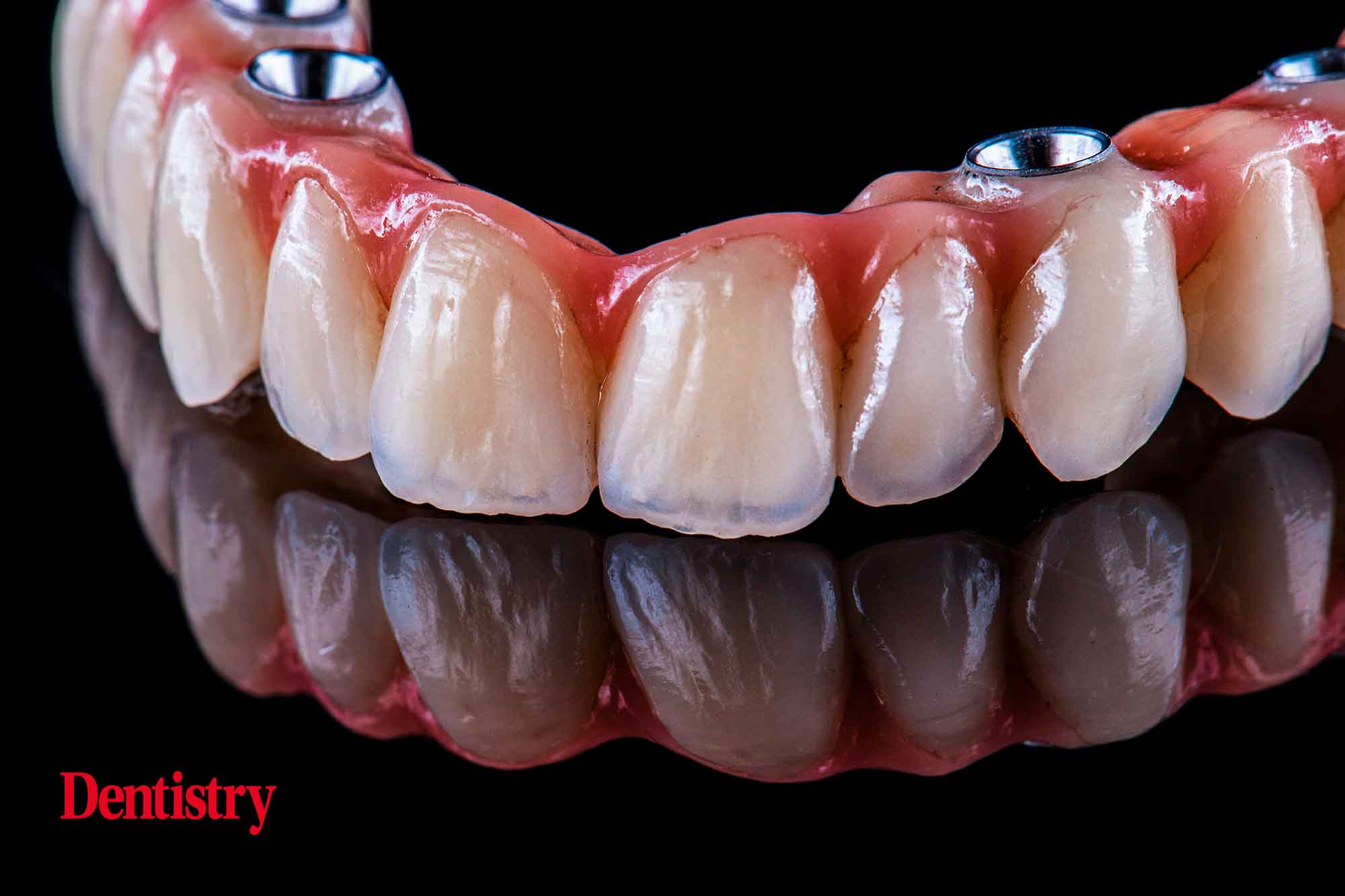 Richard Field presents a case study that uses a fixed solution to replace a single tooth, restoring a patient’s smile.

A 20-year-old female patient presented for a new patient examination. Medically, the patient was fit and well, taking no medications and was a non-smoker. She had lost her upper right central incisor through a car accident in 2006. She had recently completed a course of fixed orthodontics in preparation for the replacement tooth.

Recently, she moved to the area to begin university and was looking for a fixed solution, specifically a dental implant (Figures 1 and 2).

A full examination was carried out, including radiographs and photographs, and the findings were as follows.

Generally good oral health with no evidence of primary or secondary decay. The patient had a sectional fixed retainer on her anterior teeth. During the day she wore a single tooth denture and an Essix retainer at night.

On palpation, the patient had a buccal bony defect associated with the missing upper right central incisor. Radiographic examination showed the adjacent roots appeared to be favourable for implant placement. It was explained to the patient, however, that a CBCT scan would be necessary to confirm this.

The options discussed with the patient for a single tooth replacement were:

Following a visit to the dental hygienist, records were taken for fabrication of the initial diagnostic wax-up and radiographic stent.

The colleague at the clinic who would be placing the dental implant carried out a CBCT scan with the radiographic stent in place to check the desired gingival margin. They confirmed that implant placement would be possible and that grafting would be attempted on the same day as implant placement.

Stage one and two implant surgery was carried out by Dr Alfonso Rao.

One hour prior to surgery, the patient was administered 2g amoxicillin and 400mg ibuprofen. Anaesthesia was achieved with 3ml Septanest 1:100,000 (Septodont), using buccal and palatal infiltrations and the surgical stent was tried-in place, making sure gingival margins were correct in order to act as a landmark for implant placement.

A surgical flap was then raised with a 15c scalpel, utilising crestal and intrasulcular incisions with mesial and distal release. The implant site was prepared for a dental implant (4.1 x 10mm Roxolid SL Active BLT, Straumann).

Primary stability was achieved, recording 35Ncm torque. A 3.3mm closure cap was placed. During placement, 4mm labial threads were exposed due to the labial bone dehiscence. The implant threads were covered with Cerabone (Botiss Biomaterials) mixed with autogenous bone chips harvested using a bone scraper from the adjacent area.

The graft area was covered with Jason membrane (Botiss Biomaterials) to create labial convexity. The membrane was stabilised with tacs and the flap was closed with polypropylene monofilament 5.0 and 6.0 sutures (Figure 3).

The patient was provided with an Essix retainer with a denture tooth in situ to be used as a provisional restoration, making sure that there was no pressure on the implant site during healing.

After a healing period of four months, during which the patient carried out home tooth whitening (Evo Night, Enlighten), stage two was performed (Figures 4 and 5).

Exposure was performed using a modified roll flap technique and a 4mm healing abutment was placed. The Essix retainer was relieved to make room for the healing abutment.

Due to unforeseen circumstances, the patient needed to move abroad at short notice. So several weeks following implant stage two, impressions were taken for the construction of the first provisional crown.

As the patient would be out of the country for at least six months, a screw-retained option was chosen. The shape and colour were not ideal (Figure 6), however, due to the time constraints, it was resurfaced with a lighter shade of composite and fitted. The patient was informed that at least one or two more provisional crowns would be required on her return to fully condition the soft tissue.

The patient returned for a review appointment six months later, showing good papilla infill around the initial provisional crown. Unfortunately, due to inadequate tissue pressure and contour apically, the gingival margins were not even on the central incisors (Figure 7).

In order to put pressure on the soft tissue to equalise the gingival margins, the provisional crown was modified chairside with direct composite.

Figures 8 and 9 show the gingival margin on the day of modification and at the two-week review.

At review, it was decided that in order to further improve the tooth proportions and to correct the midline cant, composite would be added to the mesial of the upper left central incisor.

The new crown was requested to have narrowed proportions mesially to allow for composite to be placed on the UL1 to idealise the proportions.

Utilising putty indexes, B1 enamel composite (Filtek XTE, 3M) was added to the mesial of the upper left central incisor. This was achieved with no preparation. The enamel was prepared through sandblasting with 27μ alumina followed by 37% phosphoric acid for 20 seconds and Scotchbond Universal (3M).

The provisional crown was also adapted with direct composite (Figure 10).

Two months later, the patient was reviewed and soft tissue assessed. It was decided to proceed to the final crown and master impression.

The Elab technique for digital shade communication was utilised.

After calibrating cameras and flashes to the technician’s specification (PM Dental Studio), a single cross polarised photograph was taken (Figure 11) with a specially designed grey reference card for the technician to use in order to calibrate the RAW image.

This calibration allows for values to be taken from the natural tooth, which the technician can reference to their ceramic powders.

It is imperative that this shade photograph is taken at the beginning of the appointment before the patient has had their mouth open for any extended length of time. This is to prevent any dehydration of the teeth, which would result in an inaccurate (lighter) shade being recorded.

A new custom impression was taken and sent to the laboratory for a customised soft tissue model along with detailed instructions regarding positioning of the distal contact point to make sure the papilla infill was optimal (Figure 12).

The screw-retained final crown was fitted and access sealed with PTFE tape and direct composite. A new Essix retainer was made for night wear.

The four-week review can be seen in Figure 13. Figures 14 to 16 show the four-month review.

Had we had not been so pressed for time (due to the patient leaving for a semester abroad), I would not have fitted the initial temporary crown, as the gingival margin was far from ideal. However, as the tissue matured nicely during the patient’s time away, we were still able to achieve the gingival architecture we desired through careful modification of this crown.

In an ideal world, further orthodontics would have removed the need for composite bonding on the UL1. As the patient had just completed several years of orthodontics the decision was made to use a restorative approach.

The patient was thrilled with the end result. I believe this case illustrates how a significant difference can be achieved using a multidisciplinary approach to provide a life-changing result for our patients.