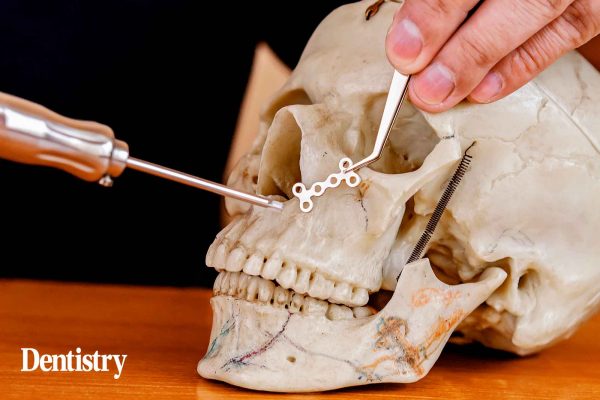 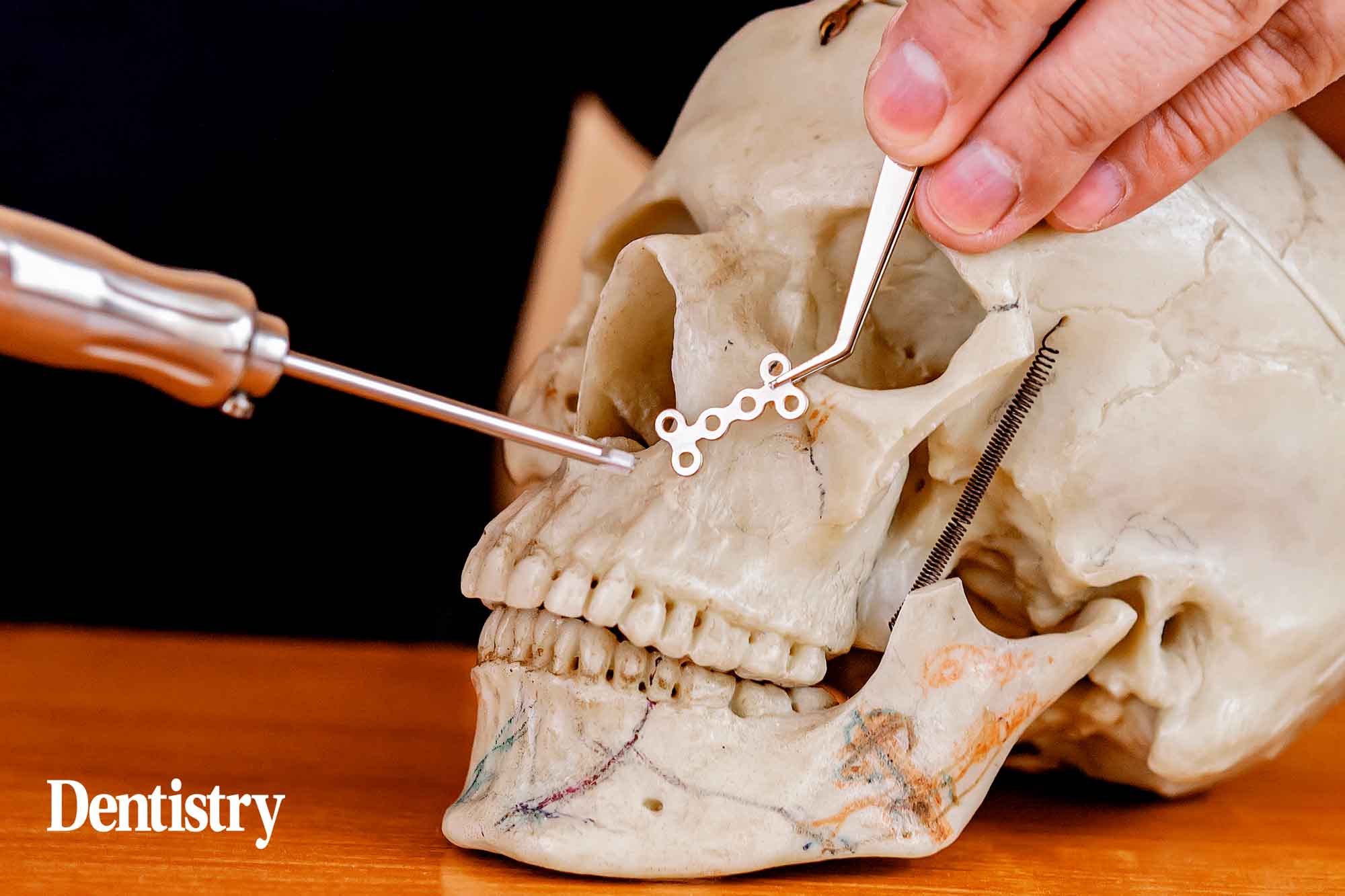 Injuries to the maxillofacial region resulting from the use of angle grinders are often disfiguring. They can negatively influence phonetics and masticatory function, as well as self-esteem.

Penetrating injuries are those that violate the soft and hard tissues by an object that forcefully enters the body.

In the maxillofacial region, these injuries may be isolated. Or, they may be any combination of contusions, abrasions, lacerations, dentoalveolar fractures, luxations in their several forms, (lateral, intrusive, extrusive), subluxations, dental tissue lesions, and avulsions (Rodriguez and Guerrero, 2010; Koyuturk and Kusgoz, 2008).

Most traumatic dental injuries are unintentional. The most dominating causes being falls, collisions and being struck by an object (Glendor, 2009).

This article presents an unusual case of reconstruction of the dentoalveolar structures, carried out one year after an injury caused by a broken disc from an angle grinder.

A 35-year-old male presented to the department of periodontics and oral medicine, University of Pretoria, with a request to replace his missing upper right canine and first premolar with a fixed restoration.

He reported having an accident one year previously: an angle grinder disc had snapped and cut into his face.

The patient had sustained a full thickness laceration through the right upper and lower lips. He also sustained a dentoalveolar fracture, with traumatic luxation of the upper right canine and first premolar. The loss of teeth negatively influenced his phonetics and masticatory function, as well as his self-esteem.

A comprehensive medical and dental history was taken. This was followed by extraoral and intraoral examination.

Extraoral examination revealed a vertically-orientated scar, about 4cm in length, extending across both the upper and lower lips from the inferior aspect of the right nasal ala (Figure 1).

Intraoral examination revealed a healthy periodontium and no dental disease. A large volume hard and soft tissue defect was noted in the first quadrant between the UR5 and UR2 (Figure 2).

A cone beam computed tomography scan was done as an adjunctive diagnostic aid. This scan revealed the presence of a mini-plate and screws in the region of the healed fracture and graphically demonstrated the hard tissue defect that existed in both the vertical and horizontal dimensions (Figure 3).

Reduced bone height along the proximal surfaces of teeth UR5 and UR2 was noted.

The patient was assessed by a periodontist and a prosthodontist.

Teeth UR5 and UR2 were not considered suitable abutment teeth for a four-unit bridge.

The hard tissue defect precluded the ideal three-dimensional placement of dental implants to replace teeth UR4 and UR3.

Augmentation of the site with autogenous bone blocks, followed by a healing period of four to six months and then placement of dental implants, was considered to be the treatment of choice.

Under local anaesthesia and sedation, bone blocks were harvested from the right external oblique ridge and ascending ramus of the mandible. A piezoelectric knife was used to harvest the bone (Figure 4).

One bone block was fixed to the lateral aspect and a second bone block to the superior aspect of the deficient residual ridge using bone screws (Figure 5).

Guided bone regeneration was performed by covering the bone blocks with anorganic bovine bone mineral and a collagen membrane, as described by von Arx and Buser (2006).

Following a healing period of four months, the bone screws were removed and Straumann bone level implants were inserted in tooth UR4 and UR3 positions.

A pre-fabricated surgical stent (Figure 6) was used as a guide for the ideal three-dimensional placement of the implant fixtures (Figure 7). Closure screws were placed and primary closure obtained, and a further two months of healing was allowed.

Osseointegration of the implants was verified with a RFA monitoring instrument, yielding an adequate implant stability quotient reading at implant level, and healing abutments placed.

Following a further healing period of two weeks, implant-level impressions were taken and temporary acrylic restorations manufactured. A period of two months was allowed for soft tissue training to optimise the emergence profiles of the crowns. Screw-retained porcelain-fused-to-metal crowns were subsequently manufactured (Figure 9).

Injury occurs when a disc shatters while rotating during use. Human error by unskilled or untrained workers and mechanical failure have been cited as being some of the most common causes (Rodriguez and Guerrero, 2010; Carter et al, 2008).

Dental trauma constitutes a significant health issue among adults with 15.5% reporting a history of injury to the mouth or teeth (Locker, 2007).

With increasing patient demands, the use of removable partial dentures is rarely the option of choice as a definitive solution.

Clinical follow-ups of teeth supplied with single crowns or included as abutments in bridge works have indeed demonstrated that pulp tissue necrosis is not a rare complication and may affect 10% to 20% of the observed teeth over a 10 to 15-year period (Bergenholtz and Nyman, 1984).

In the repair of alveolar bone defects, intraoral donor sites offer a number of advantages. The proximity of the recipient and donor sites makes it ideal for outpatient implant surgery. This is because less operative and anaesthetic time is required. There is also no cutaneous scar and patients report reduced morbidity and discomfort compared with extraoral locations (Schwartz-Arad and Levin, 2005; Gungormus and Yavuz, 2002).

The use of autogenous onlay block grafting from intraoral sites is a predictable treatment modality for reconstruction of large volume alveolar bone defects.

Aesthetics, function and phonetics can be restored following trauma to the anterior maxilla by guided bone regeneration and dental implant placement.

The authors would like to thank Dr Ashana Harrypersad, Department of Prosthodontics, University of Pretoria, for the outstanding prosthodontic work.