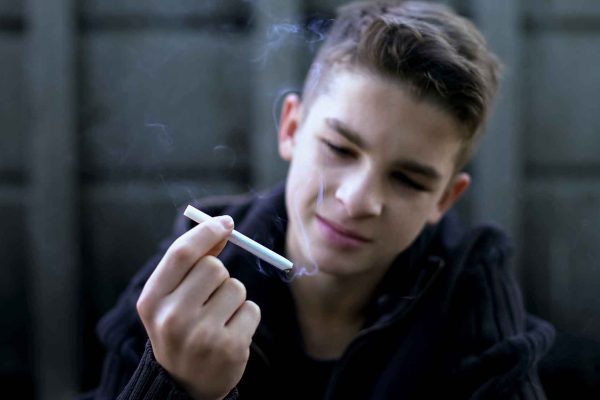 The percentage of eight- to 15-year-old children smoking in England has dropped to 4%.

That’s according to the latest Health Survey for England, which shows a continued downward trend across all age groups.

The percentage of children who have ever smoked has dropped from a high of 19% in 1997, the survey shows.

‘We welcome the survey results that smoking in children and young people has declined,’ Hannah Walsh, a BSPD spokeswoman, said.

‘The evidence that smoking damages oral health is well established.

‘We see it as an important part of our role to give smoking cessation advice.

‘Where a young person is evidently a smoker, I will signpost them to the right service to get the help they need to stop smoking.

‘The scale of the drop in the number of children smoking highlighted in this survey can only be welcome.’

E-cigarette use is also included, which shows 7% of children aged eight to 15 years old have ever vaped.

Vaping also increases with age, with 15% of 13 to 15-year-olds using an e-cigarette.

And 3% of children who had never smoked tobacco, had tried using e-cigarettes.

‘We still would like the number to be even lower.

‘Children who take up the habit of smoking are much more likely to continue into adult life.

‘Hence education about the dangers of smoking at school level is vital.

‘Whilst we support people vaping we do not think it is at all suitable for children and should only be used as a cessation tool.

‘It is therefore especially concerning that children are trying e-cigarettes before ever having tried tobacco.

‘We would like to see a review of current regulation on e-cigarettes and how they’re marketed.

‘This will make sure they are not being advertised or glamorised towards children.’

Children whose mother is a current smoker are three times more likely to have tried smoking.

However, this same pattern wasn’t replicated with fathers, with similar numbers of children having tried smoking.

Boys (10%) were slightly more likely to take up the habit if their mothers smoked than girls (7%).

Dentists have praised Cristiano Ronaldo for removing two Coca-Cola bottles during a press conference, leading to a drop in the…