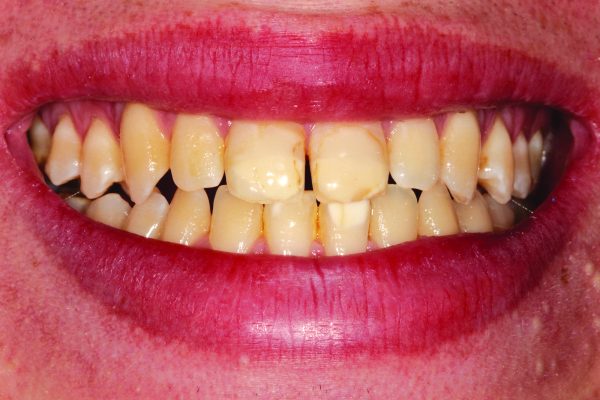 A 20-year-old male attended the practice because he was unhappy with the aesthetic appearance of old composite restorations on his UR1 and UL1 (Figure 1).

Direct composite had been placed to mask white patches, which he believed may have stemmed from a childhood trauma.

The patient had become increasingly self-conscious about his smile, but was not aware of any conservative cosmetic treatment that could improve the look of his front teeth.

Restorative treatment options were presented to the patient. The teeth could remain as they were, or the existing composite could be removed to investigate the white patches.

Icon resin infiltration, microabrasion and megabrasion were considered for removal of the white spots.

Concealing the lesions with direct composite and porcelain veneers was also discussed.

The patient requested the most conservative approach, with minimal destruction of the enamel.

Resin infiltration penetrates demineralised enamel and fades the appearance of white spot lesions and ‘hypo’ spots. The special etch opens the surface layer and microporosities. After desiccating the lesion, capillary forces draw the resin infiltrate into the resulting voids.

Due to the severity of the white patches, it was unlikely the resin infiltration treatment would completely remove the opaque white patches. However, it was suggested it would help fade them sufficiently to allow for a thinner direct composite veneer to be placed.

The composite restorations were removed using a fine diamond bur and Sof-Lex discs, to aid a clearer assessment of the white patches (Figures 2 and 3). The teeth were isolated with rubber dam and floss ligatures (Figure 4).

The steps were repeated five times, until the appearance of the white patches had significantly improved.

However, due to the extent and depth of the lesions, they did not completely disappear.

Icon-Infiltrant was applied for three minutes and agitated in the area of the white spots (Figure 7). Excess resin was removed with dental floss. The infiltrant resin was light-cured from all sides for at least 40 seconds.

After placing a new applicator tip onto the syringe, the material was applied for a second time, left for a minute and light-cured for 40 seconds.

The floss ties and rubber dam were removed, and polishing was completed using Sof-Lex discs and a buffing wheel (Figure 8).

The patient opted to have direct composite veneers to completely mask the faded lesions. Kulzer Venus Pearl Opaque Light Chromatic (OLC) and A2 shade were selected for the composite restoration (Figure 9).

The opaque nature of the OLC dentine shade concealed the remaining white patches and the A2 enamel layer helped to give the teeth a more uniform appearance.

I chose Venus Pearl composite for this case due to the predictability of the opaque dentine shades, which have very low translucency and increased colour intensity to cover discoloured teeth. The material adapts perfectly to the colour of the surrounding tooth structure, creating a natural look.

The composite is reliable, versatile, and superb for posterior and anterior applications.

Even though the infiltration process did not completely remove the lesions, it helped to fade them sufficiently.

The opaque layer of Venus Pearl did not have to be too thick, helping to achieve a satisfactory anatomical tooth shape.

The patient was delighted with the final result. His expectations were exceeded by the cost-effective, minimally invasive and aesthetic outcome.

He was also pleased the treatment was completed in a day, as he had a busy lifestyle and had to travel a considerable distance to attend appointments.