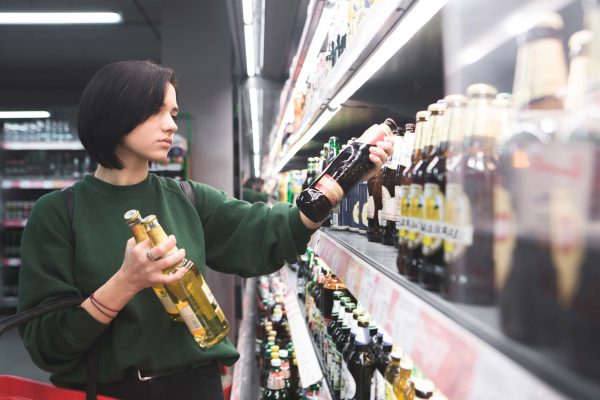 Alcoholic bottle and can labels will contain updated advice on low risk drinking guidelines published by the government.

The chief medical officer advises not to drink more than 14 units of alcohol per week on a regular basis.

If drinking more than 14 units the CMO recommends spreading consumption evenly across three or more days.

‘People often do not know the damage that regularly consuming more than 14 units a week can do to their health,’ chief medical officer Dame Sally Davies said.

The updated guidance is more stringent than previous guidelines, which recommended no more than three to four units a day.

Printing guidance for the new alcohol standards were optional when first introduced in 2016.

However, firms have now been told they have until September to update their packaging.

‘These proposals fail to provide details on calories and ingredients,’ Katherine Severi, of the Institute of Alcohol Studies, told the Mail Online.

‘Meaning that shoppers who buy alcohol get less information than when they buy milk or orange juice.’

Earlier this year Scotland announced a fall in alcohol sales to its lowest levels since 1994.

Scotland became the first country in the world to introduce minimum unit pricing on alcohol in 2018.

The analysis shows alcohol sales per adult in Scotland have dropped by 3% from the previous year.

‘With this 3% fall we are moving in the right direction.

‘There are, on average, 22 alcohol-specific deaths every week in Scotland, and 683 hospital admissions.

‘Behind every one of these statistics is a person, a family, and a community badly affected by alcohol harm.

‘Given the clear and proven link between consumption and harm, minimum unit pricing is the most effective and efficient way to tackle the cheap, high-strength alcohol that causes so much harm to so many families.’