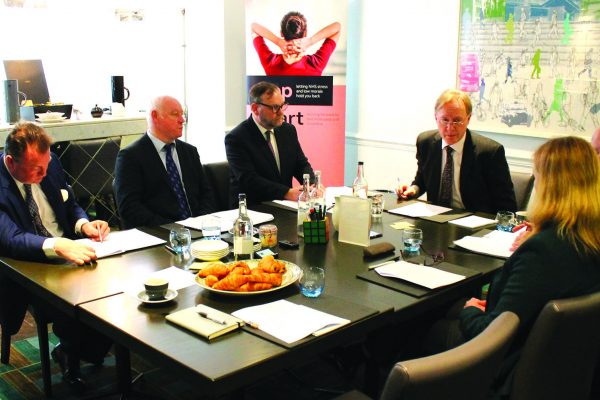 Simplyhealth Professionals hosted a round table debate to discuss the differing opinions surrounding the hot topics in the dental profession at the moment. Seb Evans reports on the new dental contract, oral health inequalities and the rise in cosmetic treatments

Children’s health has been making the headlines for all the wrong reasons recently.

For year six children, this figure jumps to more than a third (34.3%).

Going hand in hand with the obesity crisis is child tooth decay, with tooth extractions still the most common reason for children’s hospital appointments.

Following on from the questions surrounding negativity in the dental profession (covered in May 2 issue of Dentistry), the next question posed at the Simplyhealth round table was: ‘With continued reports of increased hospital teeth extractions due to poor oral hygiene and high levels of childhood obesity, the child tooth decay crisis shows no signs of abating – what more should the industry do to help address this?’

Martin Fallowfield kicked the conversation off by saying he believes it is the BDA’s role to start promoting the importance of oral health to the government.

But Chris Groombridge disagreed saying: ‘Does the government really change anything?

‘The question you’ve got to ask is how do you help yourself.

‘For too long the profession has looked back to the government, listing the issues and asking them to address X, Y and Z.

‘I’m not convinced government is really that bothered or interested.

‘The profession itself has to come up with solutions.’

It doesn’t appear any change will be coming from the government any time soon.

Any change likely to happen it will have to be driven by the profession.

But is there an appetite for change amongst the profession?

‘It feels like there’s been a different atmosphere about people moving outside their practices again,’ Catherine Rutland said.

‘It doesn’t take away a practitioner’s responsibility if they see no decay in their practice.

‘I raised it previously and this year at our key client forums, it was interesting to see the number of people who had started to do something.

‘There’s a real climate now because people realise nothing is going to get done at a higher level, so we have to do it.

‘We knock social media for so many things, but it could be a massive educational tool.’

John Milne pointed out that this needs more than just the profession, it will require the whole dental industry.

He pointed to initiatives elsewhere that England can learn from, such as Childsmile and Designed to Smile, which have seen successes in Scotland and Wales respectively.

‘The Dental Check by One, Starting Well process, they’re all geared to under twos, to try and get the message to parents and health visitors before problems start,’ John pointed out.

‘There is a direct link between social inequality and poor oral health.

‘The gap in society is getting wider, so we need a national programme so this will be taken seriously.’

Care for the elderly

With the government, profession and media focusing in so much on children’s oral health, has this been to the detriment of the elderly?

There’s certainly an argument to be made by focusing on children, because this could be seen as an investment in the future.

But, as Ian Mills explained, there is a heavy metal generation that needs a lot of dental work and this isn’t always what many would describe as ‘exciting dentistry’.

Despite this, the FGDP(UK) recently published guidelines on dealing with elderly patients through its Dementia-friendly dentistry guidelines, but it’s not just the FGDP(UK) that has been looking into this issue.

‘There’s been a debate in Westminster recently, so the topic is gaining momentum,’ John Milne explained.

‘The CQC is going to provide a report shortly on elderly care.

‘We’ve looked at 100 care homes, a small sample, in December and January.

‘We’ve been asking whether there have been barriers to receiving care.

‘The initial report will be available we hope in June.

‘One of the things we believed at the CQC was if we started to ask every care home the question about looking after oral health, the very fact of asking the question will catalyse the care home industry to think about it.

‘Strangely enough, that has happened in the 100 or so care homes we’ve looked at.

‘When the report comes out, I imagine there will be recommendations in there.

‘We’re hoping as it comes out it will bear fruit.

‘For commissioners, unless the budget increases, what’s going to happen?’

This is the point the funding needs to come from somewhere for any improvement.

Will an improvement in elderly care come to the detriment of another area of healthcare?

One of the biggest areas of growth in dentistry has been in cosmetic and aesthetic dental treatments.

There are multiple reasons for this, but one of the main drivers has been the increased use of social media and ‘selfies’.

‘Do you think we will see an increase in dentists having to make cosmetic and aesthetic dental treatments a core offering to retain and grow patient numbers and minimise the income constraints of NHS dentistry?’ was the next question posed to the table.

Many around the table described their surprise at the popularity of offering cosmetic dental treatments, particularly amongst younger dentists.

‘I think it’s a responsible business decision and it’s irresponsible not to think of diversifying,’ Ian Mills said.

‘It’s also driven by patients, perhaps not as much as we lead each other to believe.

‘But also it’s the workforce driving it.

‘For me to recruit an associate, if I can say you’ve got 4,000 UDAs and a list of 500 private patients you’ve got an opportunity to offer private services to, I’m going to get more interest in the job I’m offering.

‘The NHS contract is too inflexible for younger dentists who want to maximise their skills and income.’

One issue facing dentists is that there needs to be more clarity around what a practice can offer and what is actually available on the NHS, so that it isn’t misleading for patients.

John Milne highlighted the ‘weird moral and ethical’ position many dentists now find themselves in.

Lectures with the biggest queues out the door are on how to do Botox fillers, he explained.

Meanwhile, we have thousands of children having anaesthetics for tooth removal and the poorest sectors of society struggling to get access to dental care.

‘Pressure is on general dental practice in terms of making it profitable.

‘You now have to run such a lean business within the NHS, you only have one lever you can pull, which is expenses.

‘Your only other option is to make more through the private sector.’

As a final point of topic, conversation turned to the NHS dental contract.

April 2020 has been given as the final date the government has to introduce a new contract.

With a new wave of prototypes launched in 2018, that does not leave a lot of time for the Department of Health and Social Care to make any big changes.

Chris Groombridge started the debate by highlighting the lack of evidence for using the current prototypes as the basis for a new contract.

‘Something will be made available, but I don’t think it will be imposed,’ John Milne said.

‘My personal view is that aiming for a high proportion of capitation is the right way to go.

‘The deficiency of the UDA system will start to make practices think that, too.

‘The profession will gradually move further and further away from the NHS as the UDA system begins to creek.’

A capitation model might be a better course to follow, but many around the table are concerned with the business model the new contract offers.

‘We have concerns about access targets being too high, about 40% too high,’ Chris Groombridge said.

‘We’re always in support of contract reform and we continue to support it, but we do have some serious reservations.’

With a demoralised profession and a growing oral health crisis in both older and younger generations, the current contract is no longer fit for purpose.

‘There’s a generation of young dentists who don’t know anything different than UDAs,’ Ian Mills pointed out.

‘You ask them, “Have you had a good day today”, their answer is how many UDAs they’ve done.

‘We’ve done that to our profession.’

Those around the table were in agreement, it is time we moved away from a UDA system to a more patient-focused dental system.