Receptionists bear the brunt for NHS system and funding issues 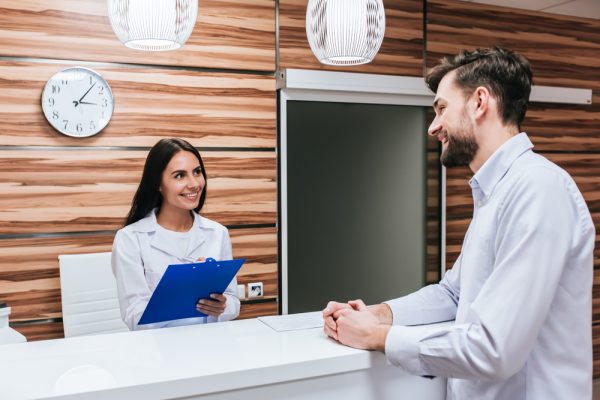 Receptionists bear the brunt for NHS system and funding issues

NHS receptionists attract bad press because they are right in the firing line – not because they do a bad job and dentists receive positive feedback, according to research by Lancaster University linguists

The project analysed 29 million words of patient comments (228,000 comments in total) posted to the NHS Choices website and results indicated that various roles in the health sector attract different amounts and types of positive feedback.

Computer software was used by Lancaster University linguists to identify frequent or unusual patterns of language in the data, however, they had to interpret the patterns themselves by reading hundreds of examples of feedback.

Surgeons were described with positive words 98% of the time, dentists 96%, midwives 93% and nurses 90% but receptionists received a lower proportion of positive words – only 57%.

Surgeons were likely to be called ‘outstanding’ and ‘brilliant’, midwives were ‘amazing’ and ‘exceptional’ while dentists were ‘great’ and ‘the best’.

Conversely, nurses were called ‘lovely and receptionists ‘pleasant’ – good words but not as impressive as ‘outstanding’ and ‘exceptional’.

Receptionists also were most likely to be labelled with a large range of negative words such as ‘useless, rude, unprofessional, unhelpful, arrogant, patronising, aggressive and terrible.’

Professor Paul Baker, who led the research, commented: ‘Rather than suggesting that receptionists need retraining or that surgeons deserve pay rises, we instead noted that feedback is very much linked to expectations and constraints around different staff roles,’

‘So jobs that involve saving your life or delivering a new life are seen as more impressive than the more support-based work carried out by nurses and receptionists – feedback has a role bias in other words.’

The poorer evaluation of receptionists was strongly linked to people taking it personally when the receptionist could not give them an immediate appointment or was required to ask the patient questions to conduct triage.

‘In other words they are often taking the flak for things that are not their fault but actually are indicative of patient frustration at bigger systemic issues – fewer appointments and longer waiting times are more likely to be the result of funding shortages that are beyond the receptionist’s control,’ added Professor Baker.

Dentists, he added, received good feedback because a significant proportion of patients reported dental phobias and expected that a visit to the dentist would result in them experiencing pain.

As most dentists were well aware of this, they made efforts to put patients at ease.

‘Patients are then pleasantly surprised when the experience is not painful and so they leave excellent feedback as a result of their negative expectations not being met’ explained Professor Baker.

‘While this is good for dentists, it raises a dilemma if we simply measure NHS success in terms of patient ratings.

‘If the NHS embarked on awareness campaigns to counter fears about dentists, then more people would be likely to visit the dentist, although ultimately patients would be likely to end up being pleasantly surprised less, resulting in the amount of positive feedback around dentists perhaps going down over time.’

Feedback was overwhelmingly driven by comments on the social skills of NHS staff, so smiling, knowing your name, being friendly and putting patients at ease were noted much more than discussion of the technical ability of NHS staff.

Even when patients referred to what looked like technical aspects, using terms like ‘good treatment’ or ‘excellent care’, when the research team explored the messages further, it was often the social side of the treatment or care that they were actually being evaluated.

Generally most of the complaints about the NHS tended to be focussed on staff rudeness, waiting times and lack of appointment availability.

‘Some patients are likely to feel unqualified to comment on technical issues involving whether the correct decisions were made about their treatment while commenting on politeness is a typically British pastime as well as being a common feature of other types of feedback like hotels and restaurants,’ reported Professor Baker.

‘On the other hand, the strong focus on staff social skills suggests that the NHS is actually functioning at a high level of competence but due to services being over-stretched, staff may be rushed so have less time to pay attention to social nuances.

The longer waiting times are also indicative of a system that is showing cracks.

Investment in the NHS needs to keep up with demand so that we can ensure that the NHS continues to be a highly regarded aspect of British life.’